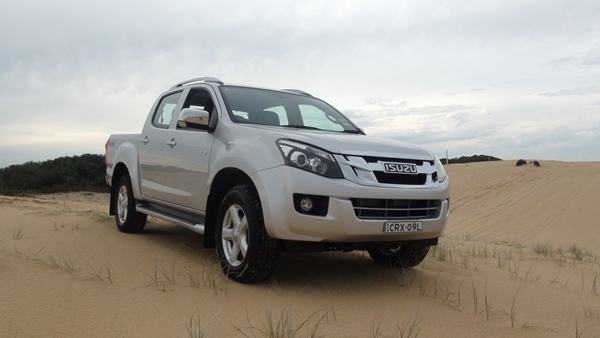 Often the underdog the Isuzu D Max has had outstanding sales success in 2014, with sales in December outstripping more fancied rivals.

Spearheading the achievements, Isuzu UTE Australia (IUA) finished 2014 with its strongest sales figures in its six year history. IUA registered a total of 2,339 vehicle sales for the month of December – comprising 1,775 one-tonne D-MAX utes and 564 units of its seven-seat MU-X SUV.

The significant sales improvement can also be attributed to the continual expansion of Isuzu UTE’s dealership network – which now numbers more than 100 dealers nationally (up from 39 in 2008). Recent additions to IUA’s dealership footprint include a combination of high-profile metropolitan and regional locations along with several rural outlets designed to service and support IUA’s growing mining fleet customers.

Isuzu UTE Australia Managing Director & CEO, Yasuhiro Takeuchi said: “I am extremely happy with the rapid growth our franchise has achieved and would like to thank our dealers and their staff for their continued commitment to ensuring our customers receive the very best service and the brand enjoys the success it deserves.

“It was only a couple of years ago we were celebrating the sale of our 10,000th vehicle – so to be realising 50,000 units so quickly is a testament to both the strength of our products and satisfaction of our customers.

“We have some very exciting plans afoot to ensure our growth is not only sustainable, but increased in 2015 and beyond.”

The latest HiLux 4×4 SR Double Cab provides customers with a more flexible and more affordable workhorse suited to their needs, combining the cab-chassis body style for the first time in this grade with a turbo-diesel engine and automatic transmission. […]

When you are thinking about smaller AWD SUV’s the MINI John Cooper Works Countryman usually isn’t the first that springs to mind. However it is a sporty, surprisingly practical, stylish Urban AWD SUV. […]

Ever since Jeep released its latest version of the Grand Cherokee in 2011 it has been a revelation. Here we have an American 4WD that has legendary off road capability combined with a powerful and economical diesel motor […]