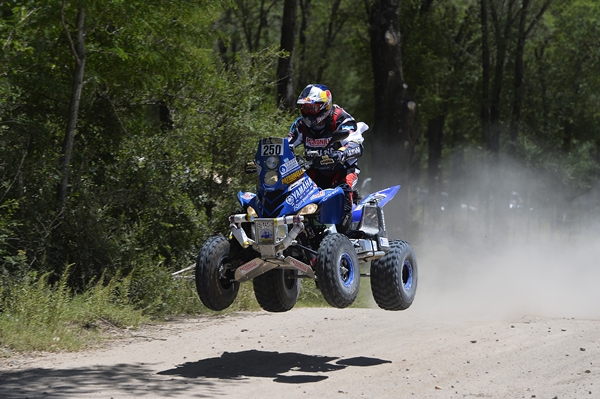 Yamaha’s WR450F has proved its performance and reliability on the toughest stage by winning the Dakar Marathon Class.

The Marathon Class is a production based category aimed at privateers that evokes the true spirit of Dakar.

The real challenge of man and machine against the harshest conditions is highlighted in the Marathon Class because the rules do not allow any major change of parts during the event.

So unlike the pro class, riders must retain the same engine, frame, forks, swingarm, cylinder heads and more for two weeks of racing.

The Dakar Rally started life as a production based event, and the Marathon Class is still very much a challenge open to all – as long as man and machine are tough enough. And this year, Venezuelan rider Cardona Vagnoni rode his WR450F home 41 minutes ahead of second spot to scoop the coveted victory.

“These production based machines are much closer to those purchased in showrooms than the full blown rally bikes. This Marathon Class win highlights the power and performance of Yamaha’s versatile WR450F, so whether you’re out on a day’s trail in the local bush or crossing a South American desert, you can do so with confidence on the fuel injected WR450F,” says YMA Marketing Manager Laurie Carleton.

Yamaha’s YFM700R Raptor once again dominated the ATV class with a 1-2 finish thanks to Chilean rider Ignacio Casale and Rafal Sonik from Poland.

That makes it six Dakar wins in a row for the gruelling rally’s ATV of choice.

In the pro class, Yamaha Factory Racing’s Olivier Pain climbed onto the podium in third spot on his YZ450F. And despite winning two stages and matching the speed of the lead riders, Yamaha’s number one rider Cyril Despres suffered time penalties and an electrical issue which relegated his YZ450F to fourth overall.

Australian Yamaha Desert Racing team member Shane Diener scored a free entry to Dakar by placing third in the 2013 Australian Safari. The YZ450F mounted South Australian was down in 73rd position on day four and clawed his way back to finish in 38th spot – one of only 40 per cent of motorcycle riders who finished the tough 9000km event

Established motorcycle and scooter distributor, PS Importers, have announced their success in securing the Australian distribution rights for USA based ATV and Side-by-Side manufacturer ‘Arctic Cat’. Arctic Cat Australia is now in operation with product arriving as soon as March 2013 […]

Welcome to the OzRoamer Magazine for the months of May and June 2014. This issue we have over 80 pages of information to help readers make more educated buying decisions. There are 6 new 4WD & AWD SUV models as well as 6 reviews on both SUV styles. We also take a trip to New Zealand in a Toyota Prado and have part 1 of the story. […]