With an incredible line-up, including some of Australia’s biggest artists already set to burn up the main stage on both Friday and Saturday nights, Deni Ute Muster organisers are now pleased to announce an extremely talented group of performers who will be keeping crowds entertained and providing the soundtrack to the festivities throughout the day on the Day Stage, proudly supported by Ice Break.

Opening the festival on day one will be Bush Poets before the Deni Showcase and the Deni Uke Muster take turns demonstrating just how deep the pool of local talent is in the amazing Riverina region. Crowd favourite Ben Ransom Band then takes on the lunchtime slot before powerhouse performances by Seleen McAlister and Christie Lamb, with The Distance then wrapping up the day program.

As previously announced Friday night’s program then kicks in with the unmistakeable sounds of Hillbilly pop-stars The Pigs, before The Wolfe Brothers turn on the charm, followed by the anthemic sounds of Birds of Tokyo, and Australian country music’s rising star Morgan Evans, with Aussie Rock Royalty Cold Chisel bringing down the house on night one.

Day two again sees the Bush Poets, Deni Showcase and Deni Uke Muster wake up festival goers after an epic first night. Come lunchtime it’s time for the iconic Deni Ute Muster tradition, the Blue Singlet World Record Attempt before sister act Baylou kick things into gear again in the afternoon. Paul Cowderoy will then soothe the crowd with his soulful sounds, before the effervescent Courtney Conway takes to the stage followed by Mickey Pye to wrap things up for day two before the night program gets underway. 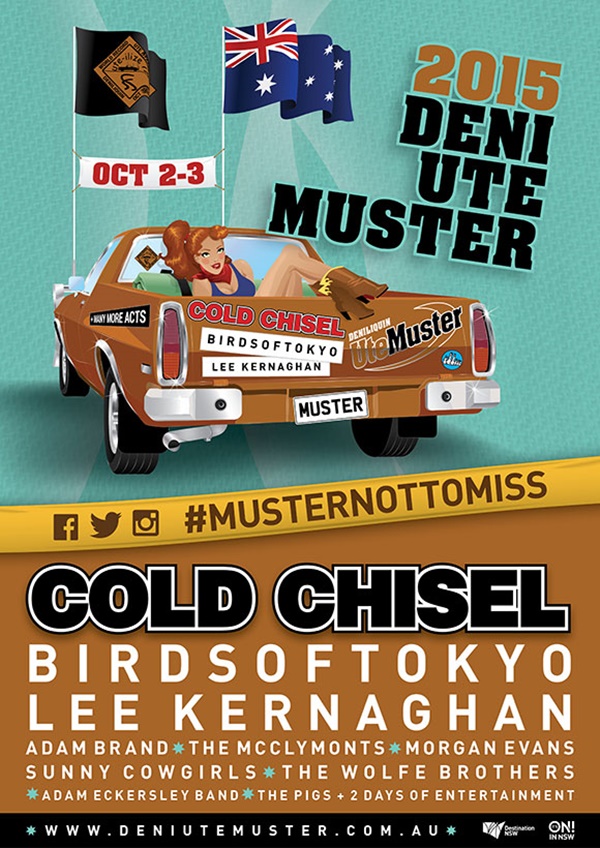 Saturday night is a bit of a family affair with Muster favourites, sister duo The Sunny Cowgirls getting the final party started, the Adam Eckersley Band then take the reins before handing them on to again another set of sensational siblings, The McClymonts.  Two beacons of the Australian Country music scene will then shine their light on the 2015 Deni Ute Muster crowd with the penultimate performance from Adam Brand, before Lee Kernaghan takes to the stage to wrap up proceedings for another year with a good old fashioned sing-a-long.

Kate Pitt, Deni Ute Muster General Manager has said “We’re thrilled to have such a talented range of up and coming Aussie artists on our Ice Break Day Stage this year. The day stage provides a fantastic platform for country artists to showcase their ability and really break into the market place. We can’t wait to hear the tracks coming off the Ice Break Day Stage this year!”

The Deni Ute Muster is on almost every local and international bucket list and with no rise in ticket prices, more music and more fun than you can cram into your average long weekend, our Australian Made event will be one to remember for a lifetime so don’t miss out – get your tickets today!

The Deni Ute Muster is proudly supported by the NSW Government through its tourism and major events agency, Destination NSW.

Later this month the New Mazda BT-50 arrives with refreshed exterior styling and new features, but with only a minor price adjustment. Launched in October 2011, the current BT-50 has gone through its first design revision with changes to the front and rear of the vehicle and a range of new interior upgrades included. […]