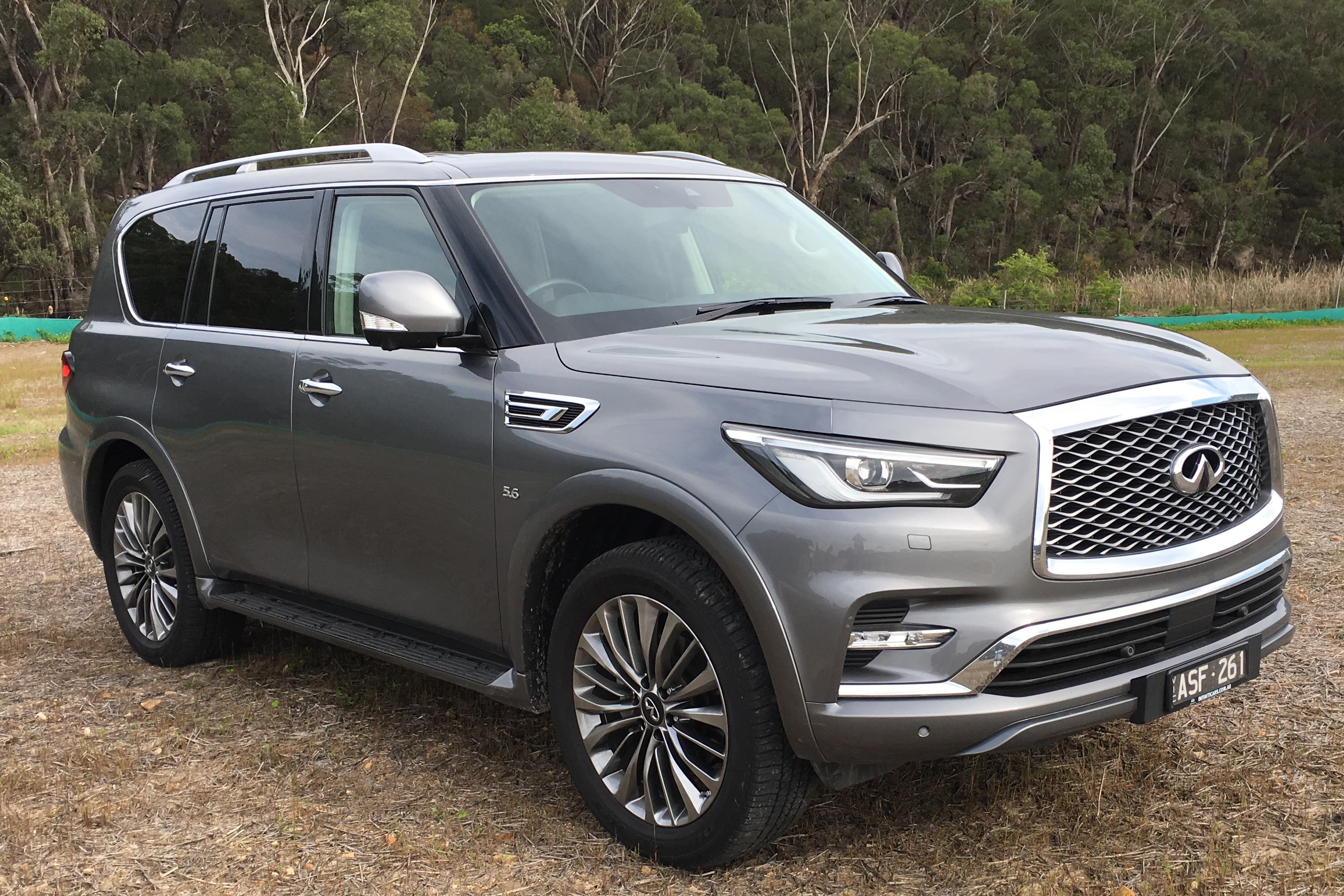 Infiniti as a brand has had a few attempts to establish itself in Australia. It does have a broad model range, some developed from scratch some with shared underpinnings.

The QX80 is such a vehicle, sharing the same donor components as the Nissan Patrol. Much like the Lexus LX series shares the LandCruiser components.

The QX80 had a major update in early 2018 with an external redesign and more features added internally. Selling in small numbers and primarily designed for the Middle East and USA, the QX80 has a small but strong following in Australia. 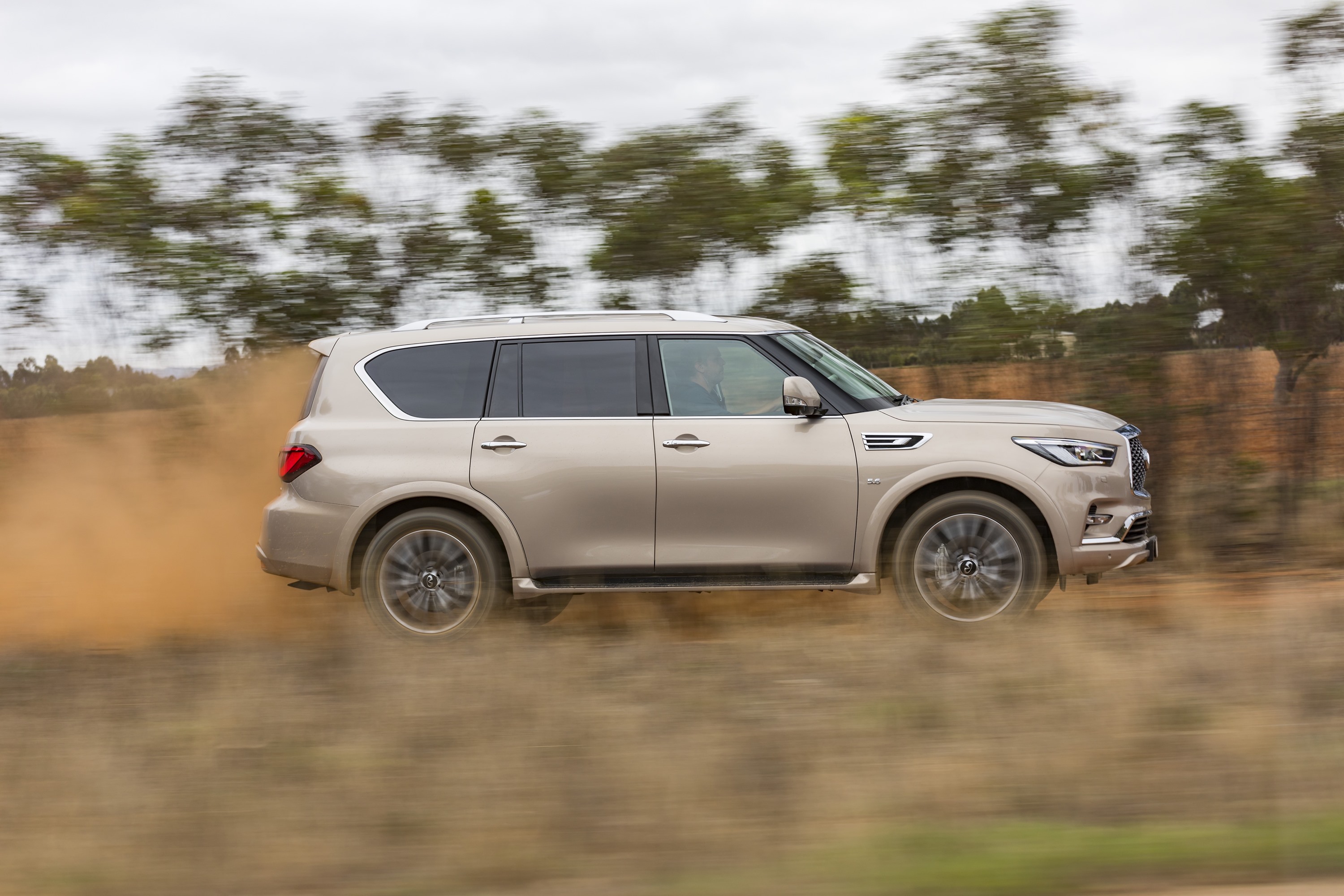 The Infiniti QX80 looks big, and it is, like its Nissan cousin. It has that polarising look that people either like or look aghast at. To me it has a front end that only a mother could love and a rear end that Kim Kardashian would be proud of.

Changes to the QX80 include an updated front end that makes a bold statement with bold proportions and a commanding posture. Extensively redesigned; the headlights, front bumper, grille and bonnet have been moved upwards, while the rounded curves of its predecessor have been squared off, particularly on the lower bumper, giving the QX80 a wider more angular look.

The bonnet is 20mm higher and has been extended by 90mm, the double-arch grille is taller and broader, and the wider, more angular front bumper has a muscular design that elevates its athletic stance along with the 22inch alloy wheels. 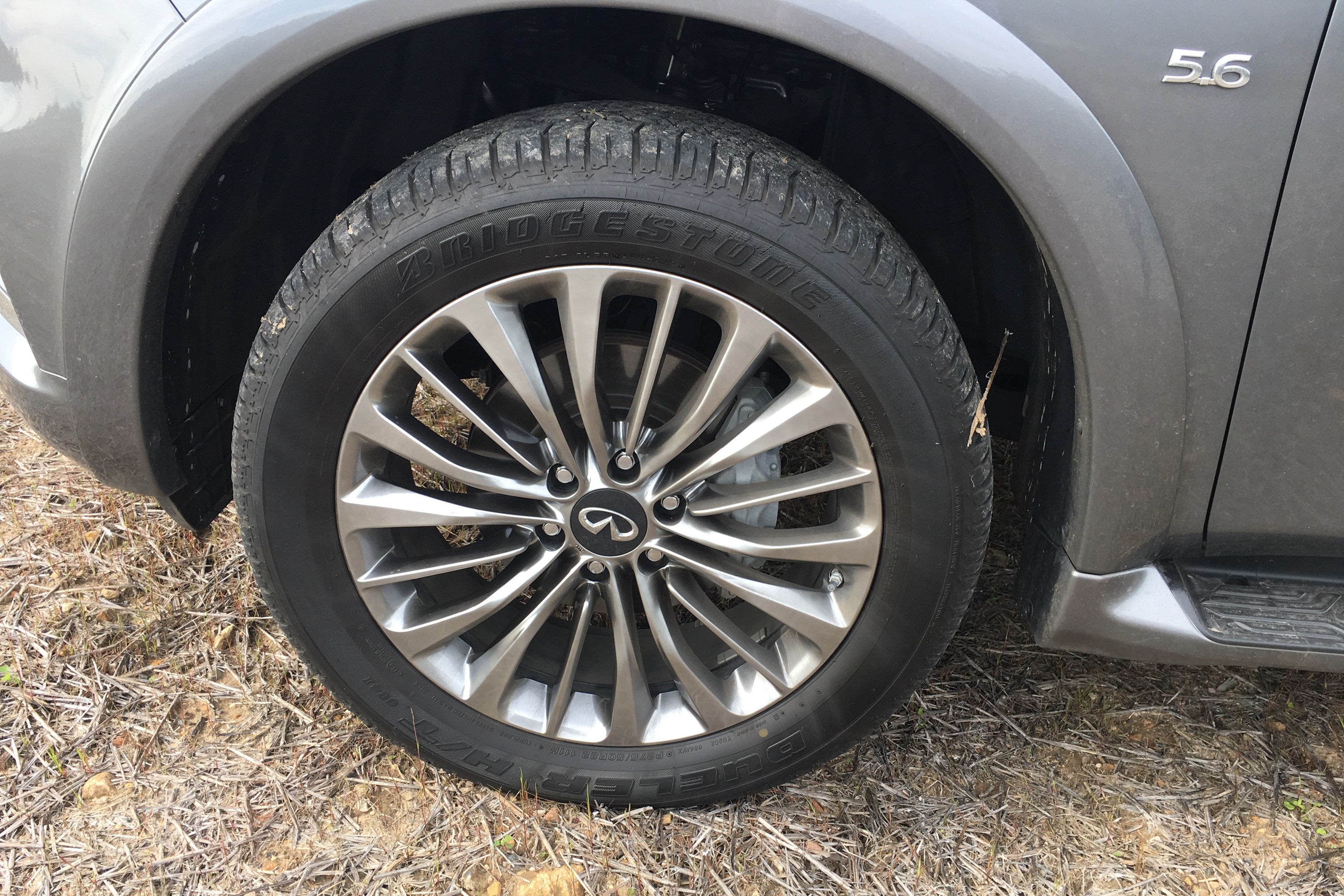 With a higher centre of gravity, the side air vent, bonnet and front quarter panels have been moved so that the shoulder character line runs higher on the vehicle’s body, while the side steps have been extended out by 20mm making it easier to get in and out of the vehicle.

From behind; the tailgate, taillights, chrome bar and rear bumper have been redesigned to give a firmer, higher look. The cargo door has also been updated, better integrating with the sharper, thinner rear LED lights. 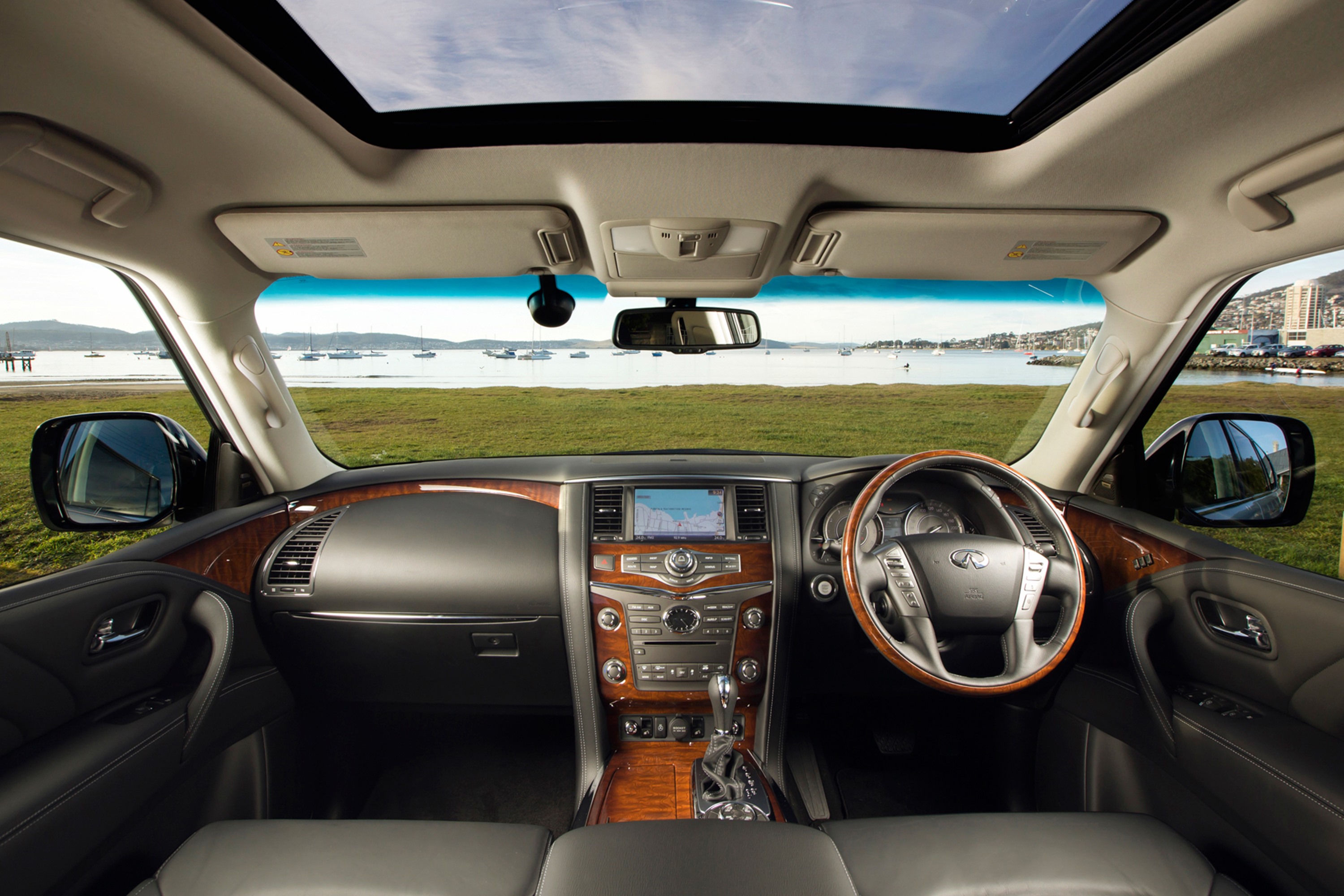 Climb up inside over the stainless steel sill plates and the size theme continues. It feels positively cavernous. It also feels a little bit like I stepped back in time to the 1980s. The woodgrain overlays are everywhere and with a circular theme it definitely must be designed for its intended market, just not Australia. It is almost identical to the Patrol TI-L

Both the quilted leather front seats are climate controlled as well as multi electrically adjustable with the drivers having additional electronic lumbar adjustment. Siting in them is like being home in the Moran recliner, very comfortable. The driver’s seat is slightly restricted in its length of slide, and for such a huge vehicle, I felt like I could do with a touch more.

Again with the high, curved door sills and the wide centre console, I felt slightly compacted, at odds with the overall feeling. But even with the panoramic sunroof there is plenty of headroom. There is a driver’s grab handle as well as extendable sun visors, always handy. 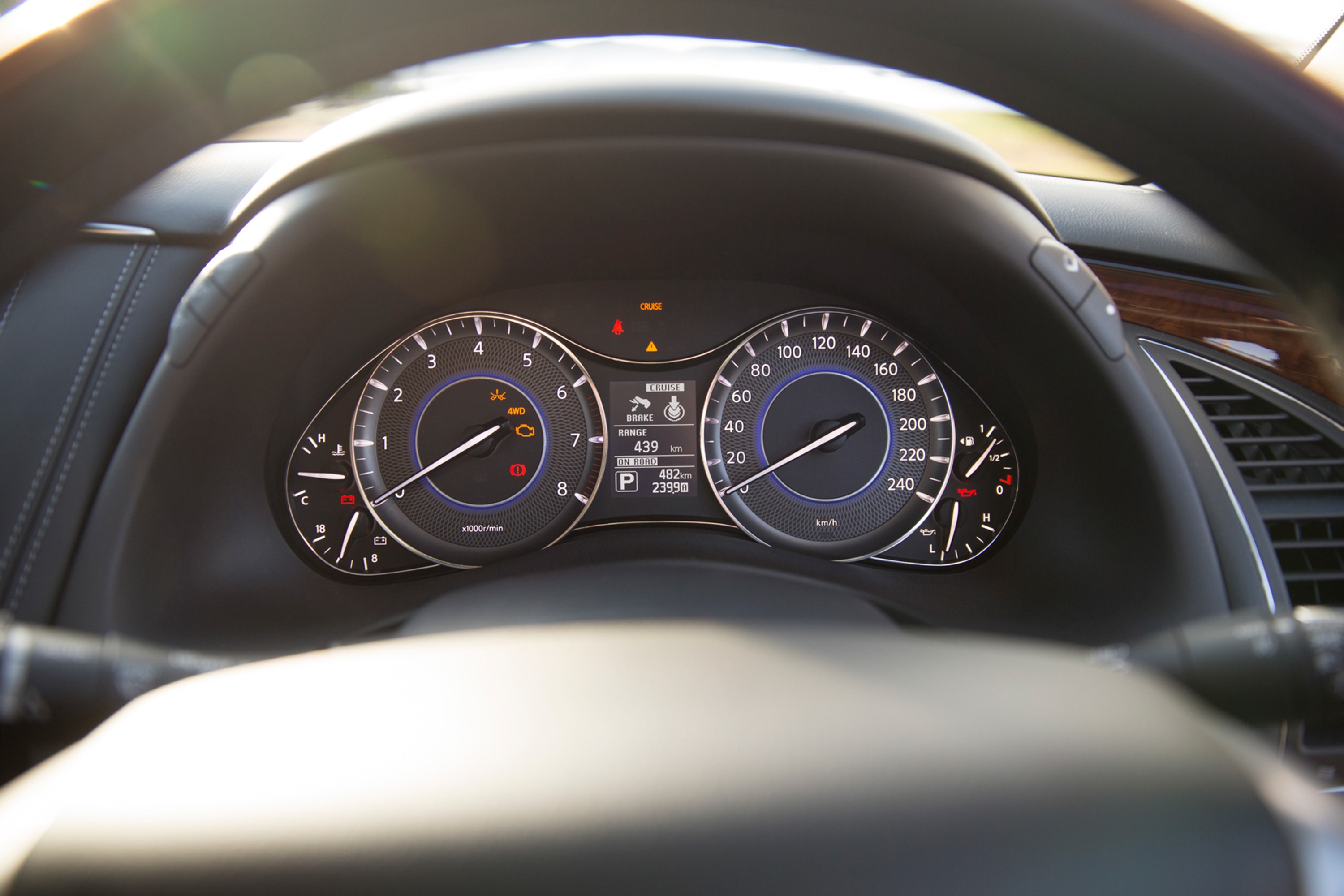 In front of the driver is a thick, power adjustable wood rimmed steering wheel that frames the twin large dial instrument binnacle. White on black dials are crisp and easy to read. They are separated by a smaller MFD as is usual these days. The controls on the steering wheel and spread out in an unusual design and again, something different the top outer edges of the instrument surrounds also house buttons for the MFD. It took a while to figure that out.

With a very unique look the centre stack is a mix of woodgrain overlay and silver dials and buttons. Unusually there is still a CD port, something that is rapidly disappearing from cars and questionable worth. The Satellite Navigation with 3D mapping and 8″ integrated colour display with touch screen also houses the audio system with 13 Bose speakers throughout. They sound awesome.

The issue is that with the vertical AC vents framing the screen, the 8 inches looks very small, especially when many other SUVs are heading to 10 or 12 inch screens, which could be housed. 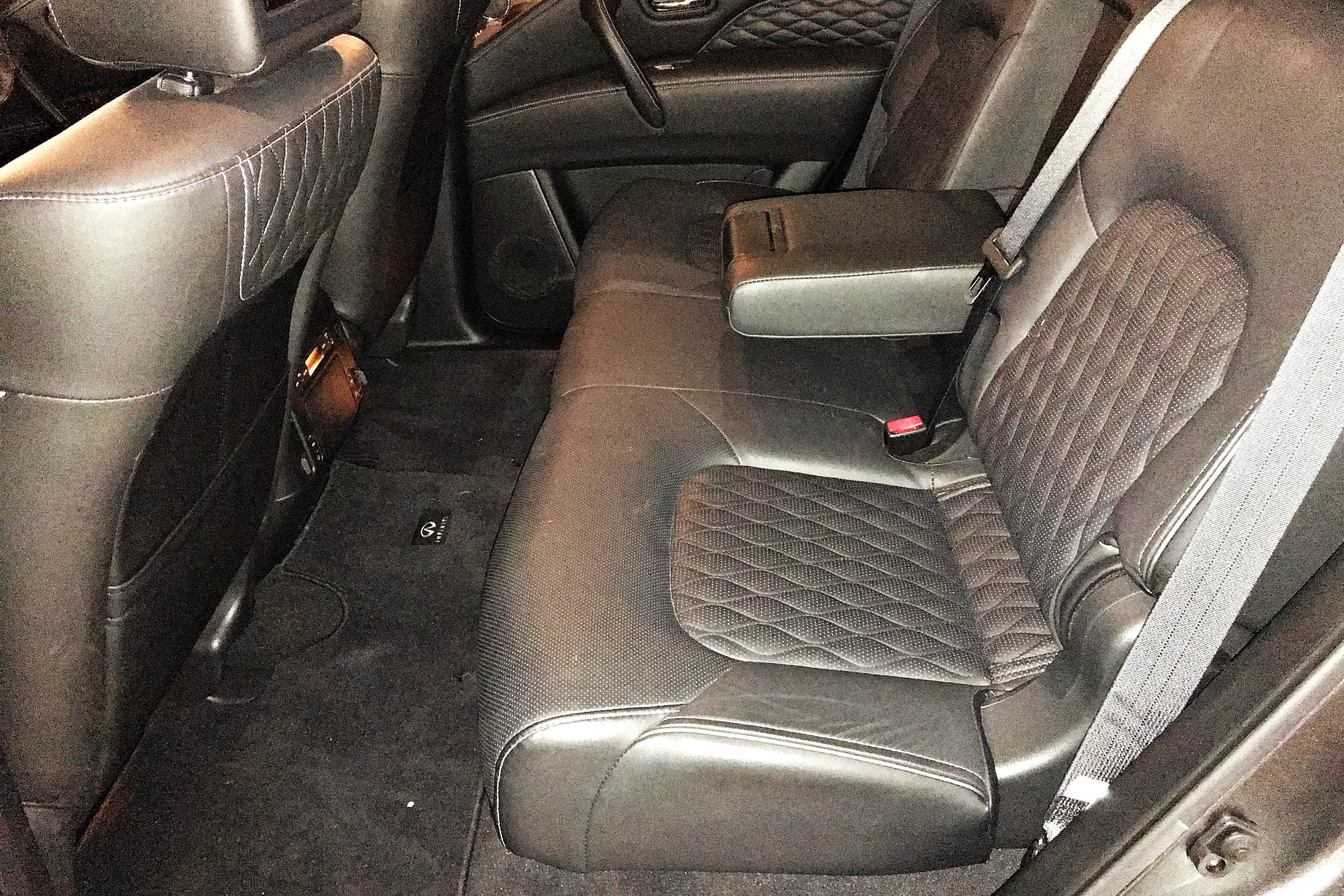 There are storage areas everywhere, with a huge lid chilled centre console for drinks to keep the driver and passengers refreshed.  Also keeping the occupants refreshed is the tri-zone climate control air-conditioning with Intelligent Key memory along with rear seat controls.

Second row passengers are well accommodated with easy access courtesy of the wide opening doors, plenty of room for even longer legs and two 8 inch screens for entertainment as well as rear AC vents, heated outer seats and USB ports for the electronic obsessed. 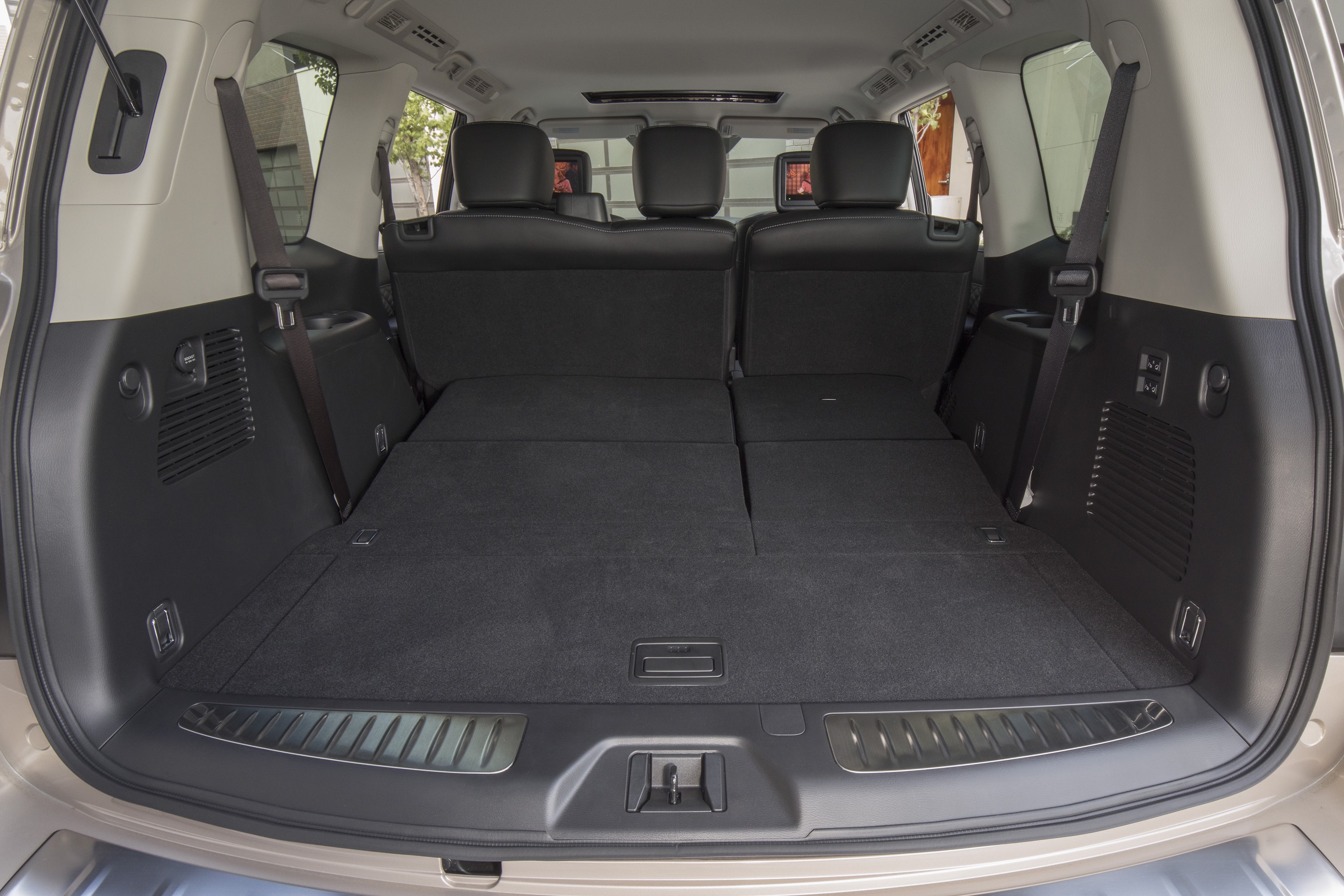 These exceptionally comfortable quilted leather seats are more comfortable that a number of front seats in other cars and fold in a 60/40 configuration to give reasonable access to the rear seats, that are ok for slightly taller kids, but with no foot well. The boot area is huge and with fold flat seats becomes cavernous at 1500L plus. Even with the third row seats up there is about 500L of space available. 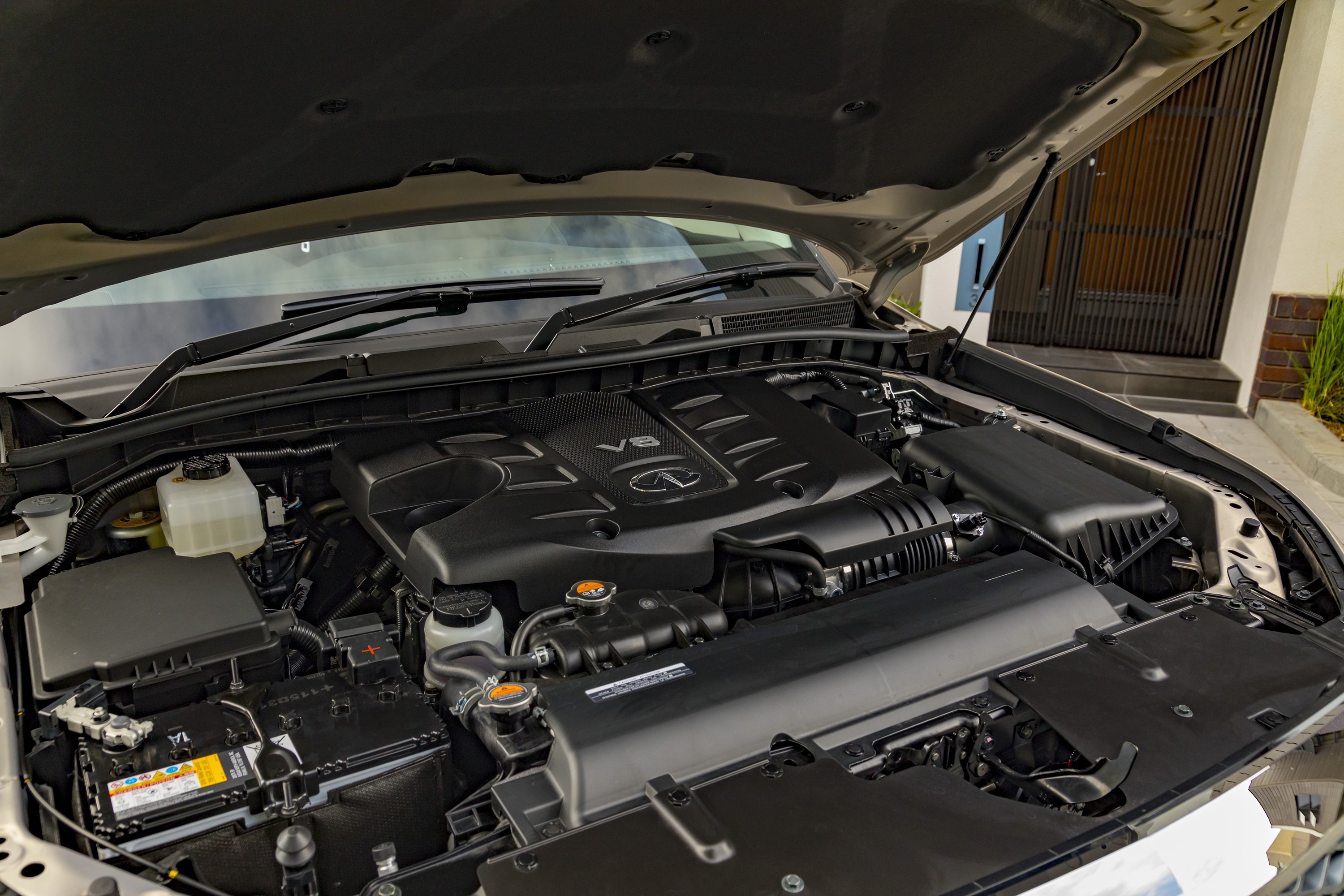 A 7-speed automatic transmission with manual mode complements the intelligent 4X4 shift switch (Auto, 4-high and 4-low capabilities) making driving, whether on road, snow, sand or rock, convenient. There is also an electronic rear diff lock. Hydraulic Body Motion Control (HBMC) suspension system along with the off road monitor assists with control of all driving situations.

This V8 petrol engine will drink fuel at an ADR combined rate of 14.5 l/100k. On the freeway I managed to extract about 10 l/100k on cruise control, maximising the low torque of the V8, however around town we were constantly seeing the wrong side of 20 l/100k for normal driving. That hurts at the bowser. Even with a 100L fuel tank you would be visiting regularly. 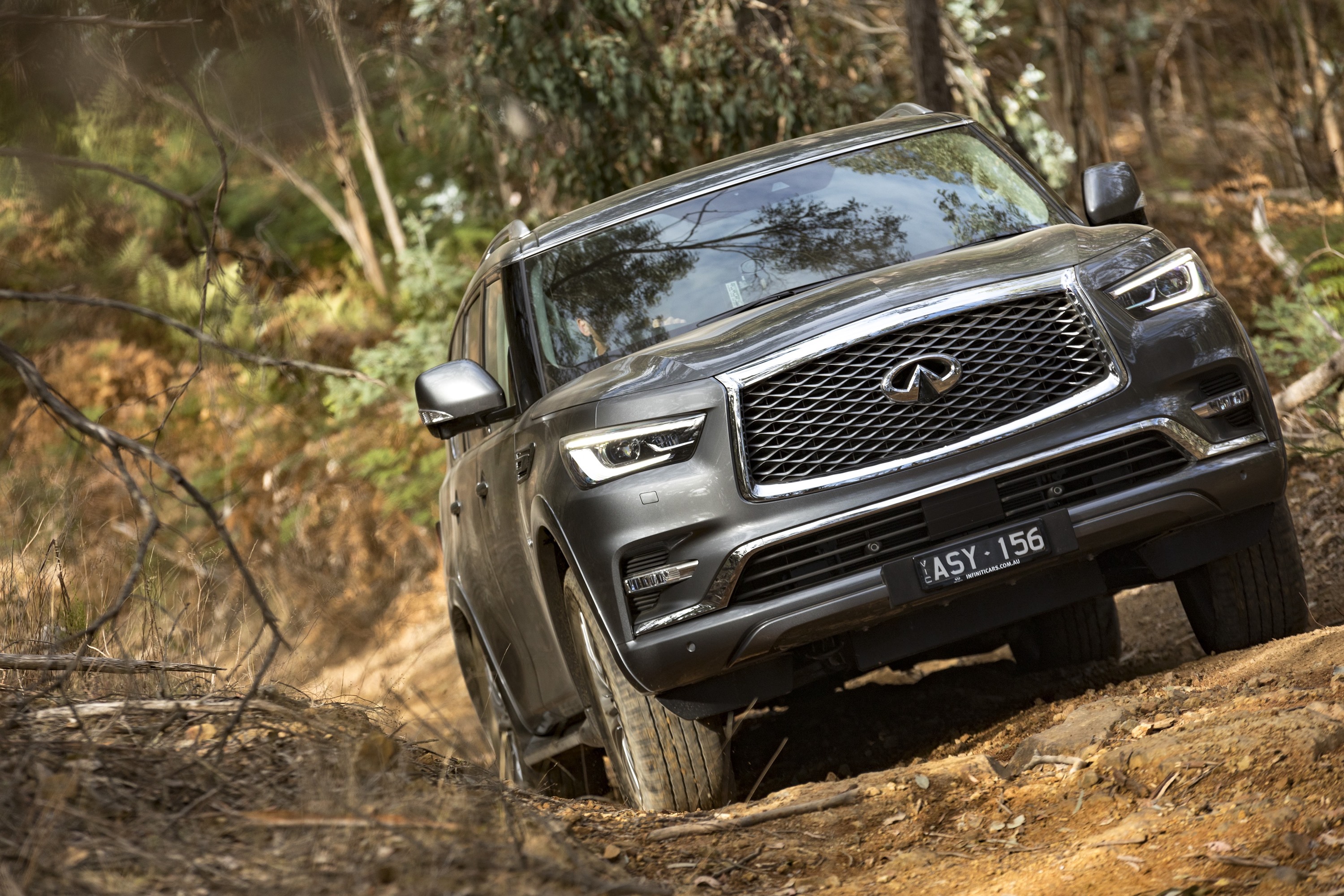 Remember I said the QX80 was big, well driving it around town is like driving a land yacht. It’s massive for suburban shopping centre carparks and narrow inner city streets. I can just imagine powering over the sand dunes of the Middle East pretending to be Lawrence of Arabia.

This thing is huge to drive and feels big. This isn’t helped by incredibly light steering that in a way disconnects you from control. It does come in handy though in tight suburban shopping centre car parks. It’s quiet, very quiet inside, the suspension soaks up every bump possible and it feels like gliding along on air. That is good and bad. At times it also exhibits a fair degree of body tilt, even with the HBMC, as it feels top heavy. 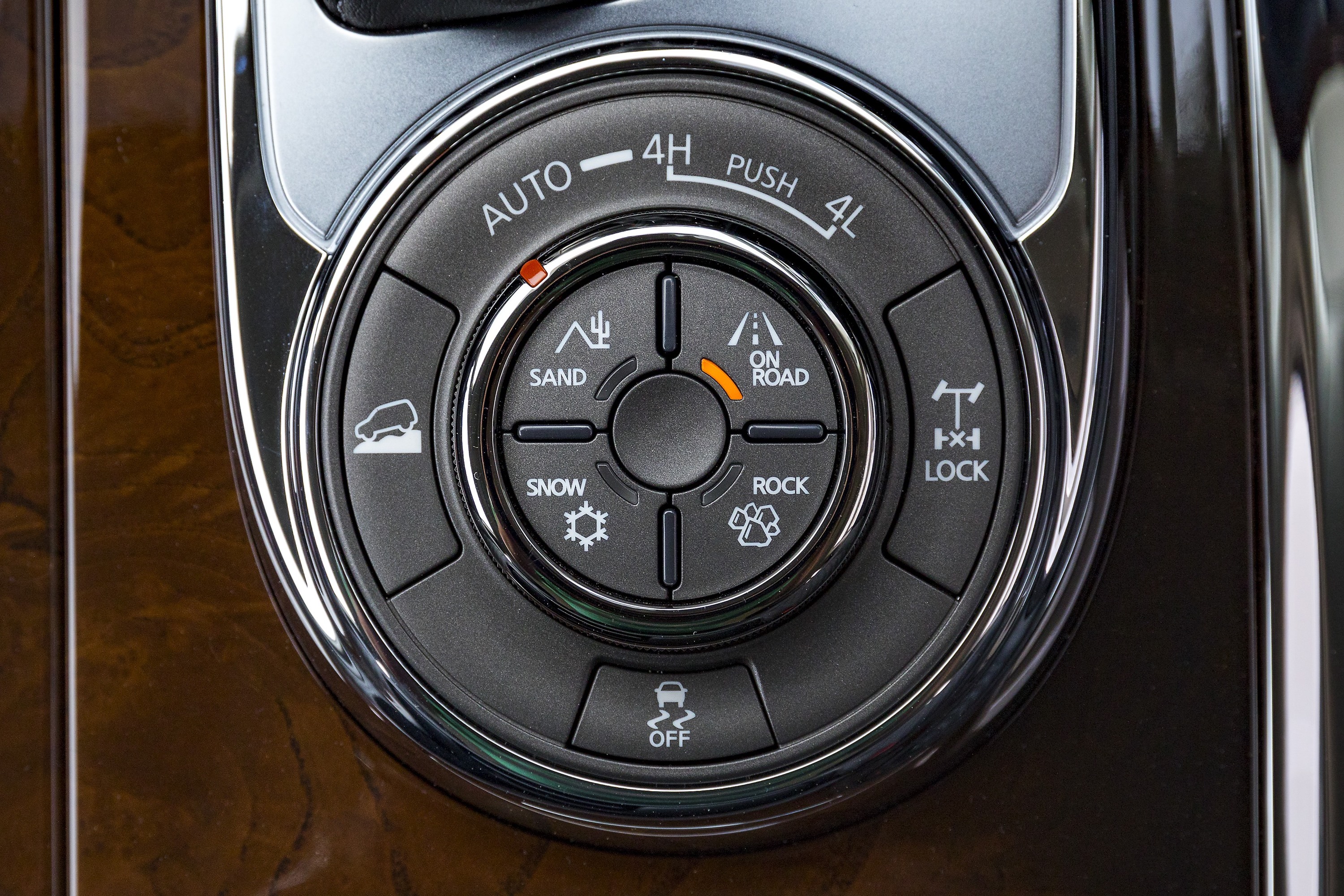 Off road credentials retain the strong DNA of the donor vehicle and even though it is far removed from its Nissan ancestors, it will still go where they went, only in luxury and comfort.

The towing brigade will love the ease of towing, but the fuel economy, or lack of, will shock them. You are cocooned rom the realities of the harsh Australian outback while gliding along over the roughest of tracks. 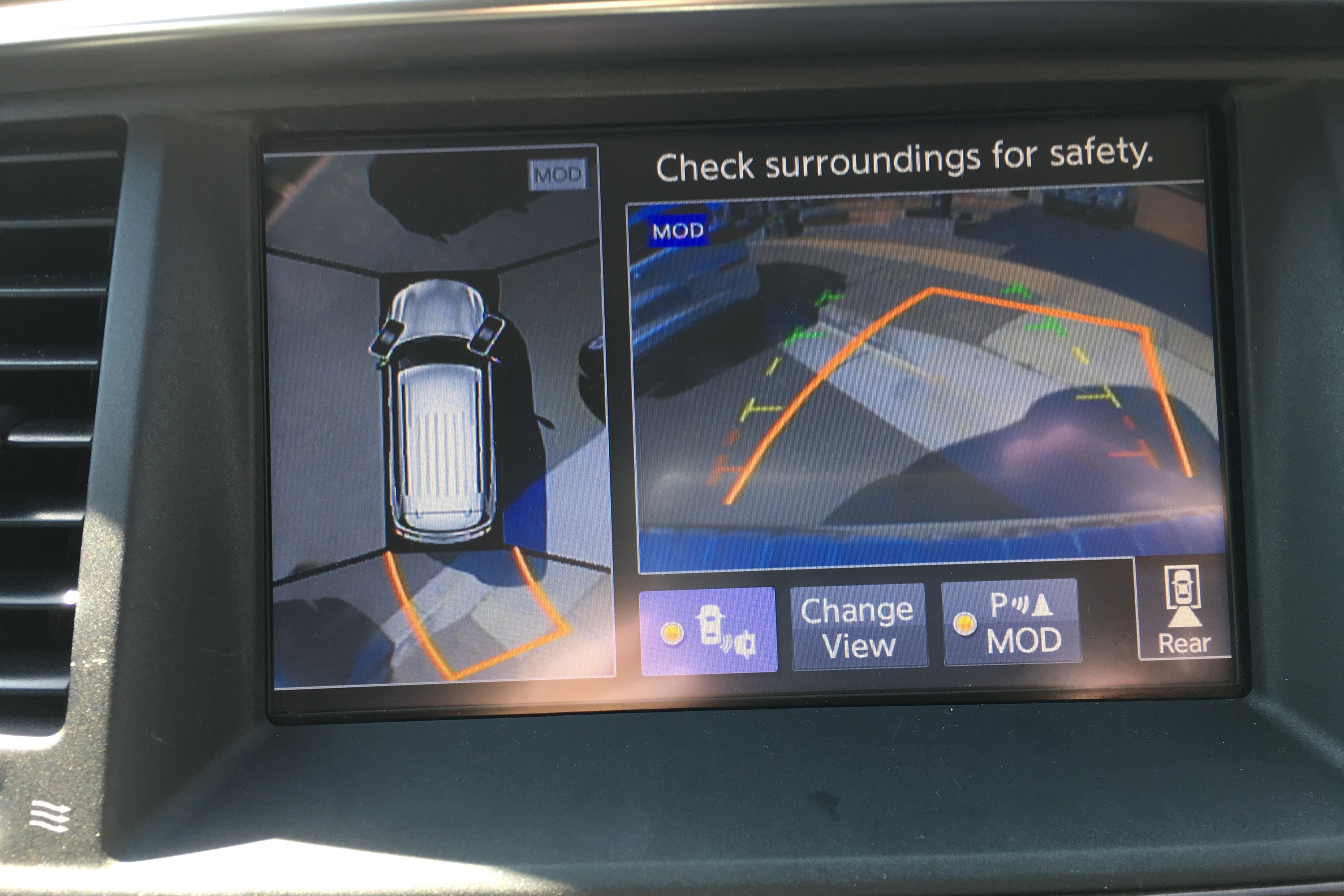 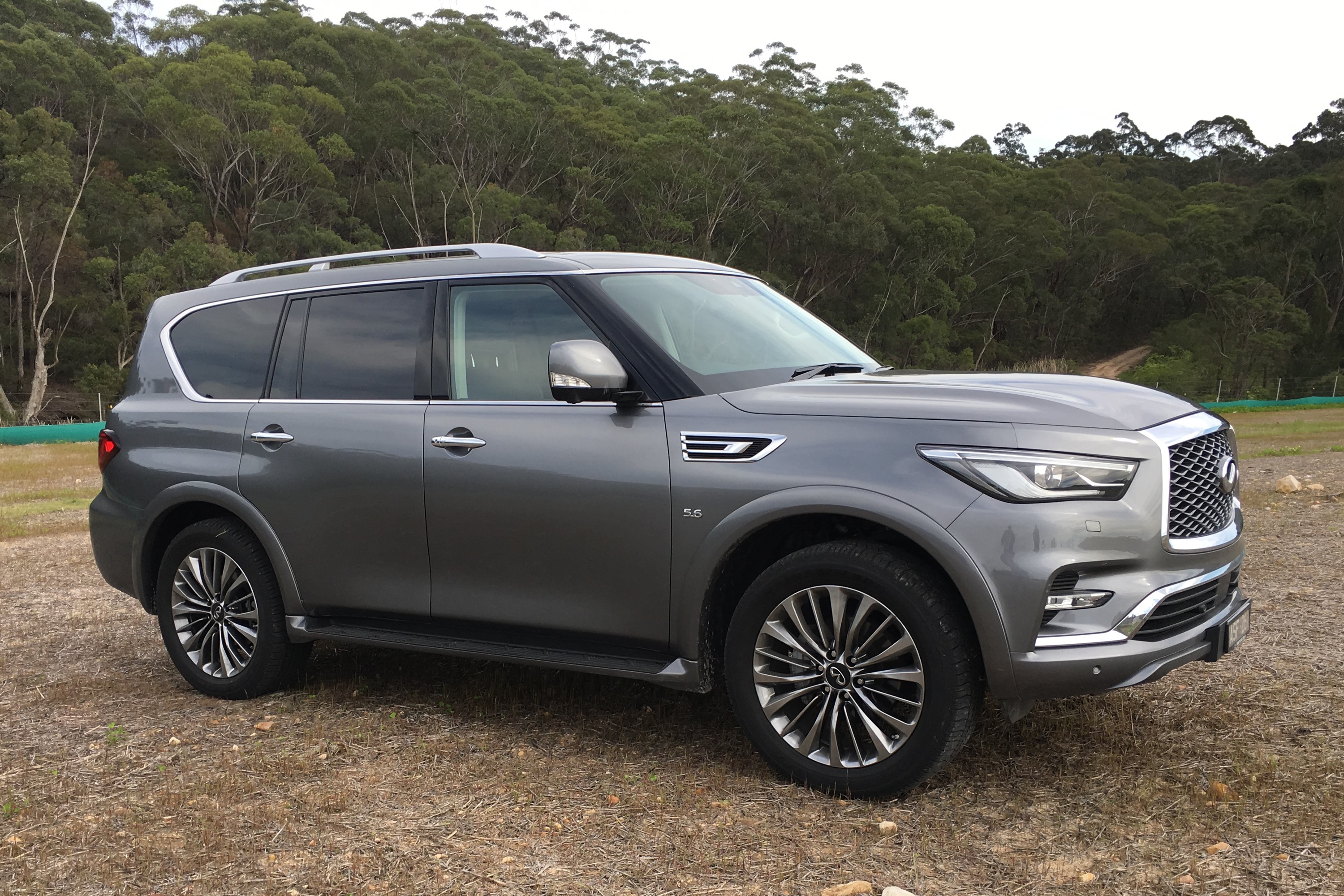 If transporting a family of seven in cavernous comfort and luxury, while being able to go off road or tow a horse float or boat for the family holiday is what you’re after the QX80 fits the bill perfectly. Just don’t look at the price of fuel.

The QX80 sits in a rare category, the luxury true 4WD. There are only a few there and it equips itself admirably. It will never have the dynamics of a Land Rover or the following of a Lexus, however it actually does most things pretty well.

It sells in ridiculously small numbers, say less than 100 a year, but is important as a flagship model. I’m actually glad that Infiniti has persevered with the vehicle, and encourage buyers to at least have a drive. When these vehicles eventually disappear under the PC world of EV my world will be a much sadder place.

Until then I delight in knowing that there is a beast of a 4WD that will carry my family in absolute luxury and comfort pretty much anywhere I choose to go, without breaking the bank. It remains an exceptionally capable 4WD vehicle and can tow almost anything you put behind it.

Amongst the standard wagons it is about the biggest there is, it is comfortable, spacious, luxurious and yet like its Nissan cousin, slightly misses the mark. Designed for the Middle East and North American markets, it doesn’t quite fit the Australian market. Also there is the enormous fuel appetite that is exacerbated by a willing V8 engine and a tendency to have a heavy right foot. 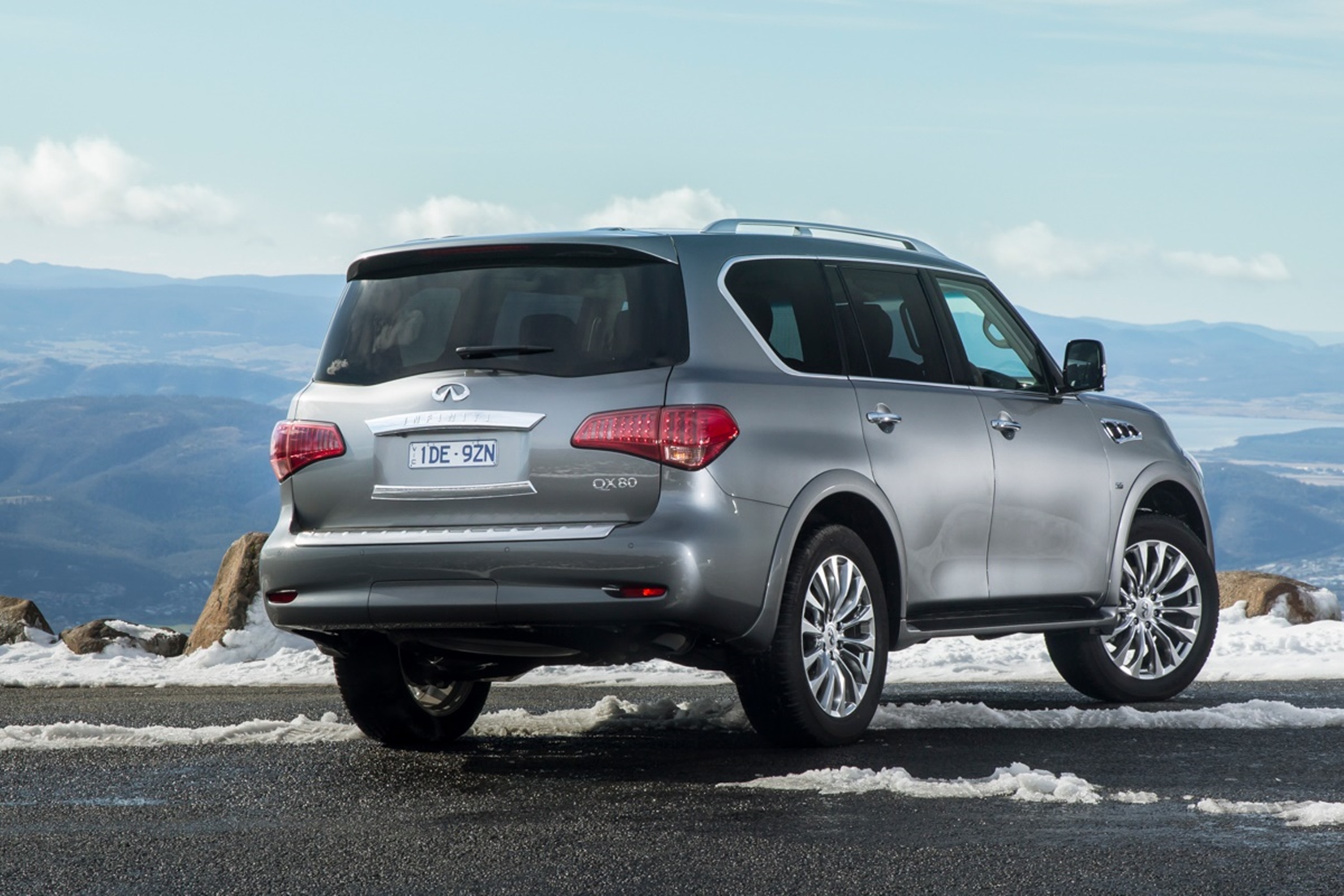 *Includes GST and LCT but excluding statutory charges, dealer costs and dealer delivery. See your dealer for RDAP. Does not include price of options. Some features mentioned in the article are options

The Infiniti QX80 looks big, and it is, like its Nissan cousin. It has that polarising look that people either like or look aghast at. To me it has a front end that only a mother could love and a rear end that Kim Kardashian would be proud of.

About Rob Fraser 954 Articles
Rob Fraser – General dogsbody & Director Rob is the founder of the business. He constantly mutters something about way too many red wines one evening being to blame. He first learned to drive on the farm in a left hand drive WW11 Jeep when he was 11, many years ago. He has maintained a strong interest in the industry ever since and was hooked on 4WDriving way back then. Having previously lived at the top of corporate life he retired in 2000 and hasn’t put a suit and tie on since. Cars are his passion so why not have a business doing what you love he figures. He has towed either a caravan or camper trailer to most parts of Australia, has run guided tours for camper trailers’ and instructed drivers in off road towing Often known for taking the 4WD in the driveway over the sports car, he has travelled pretty much everywhere in Australia and when he is bored goes for a drive.

We review the ubiquitous MAXTRAX as a recovery device on our recent Project Pajero trip. Bogged to the diffs in a sandy creek bed we found the MAXTRAX extremely easy to use and saved ourselves a heap of time and effort. MAXTRAX […]

Buying a full-size luxury SUV is an exercise reserved for those with very large expendable incomes, though the updated Infiniti QX80 will see you get away with a big and bold beast without […]

Mini Goes Glamping. Put a camping pod on the roof, and this Mini Countryman ALL4 AWD SUV will take any brave couple on a cheeky weekend camping trip, with no difficult set-up required. […]