Nissan Pro-4X Warrior – Nissan has just revealed its latest top of the range dual cab ute, now called the Navara Pro-4x Warrior. It clearly has a macho image, and name, but is it just a show pony or a credible off-roader? The power train is the same as the previous model (the N-Trek) but the suspension and design have had some work.

At the launch we talked to Nissan and their contracted engineering company PremCar on how they identify customer needs and go about developing the extra bits that turn the Navara into a Warrior.

And we drove it through on bush tracks, on the highway and all the roads in between. 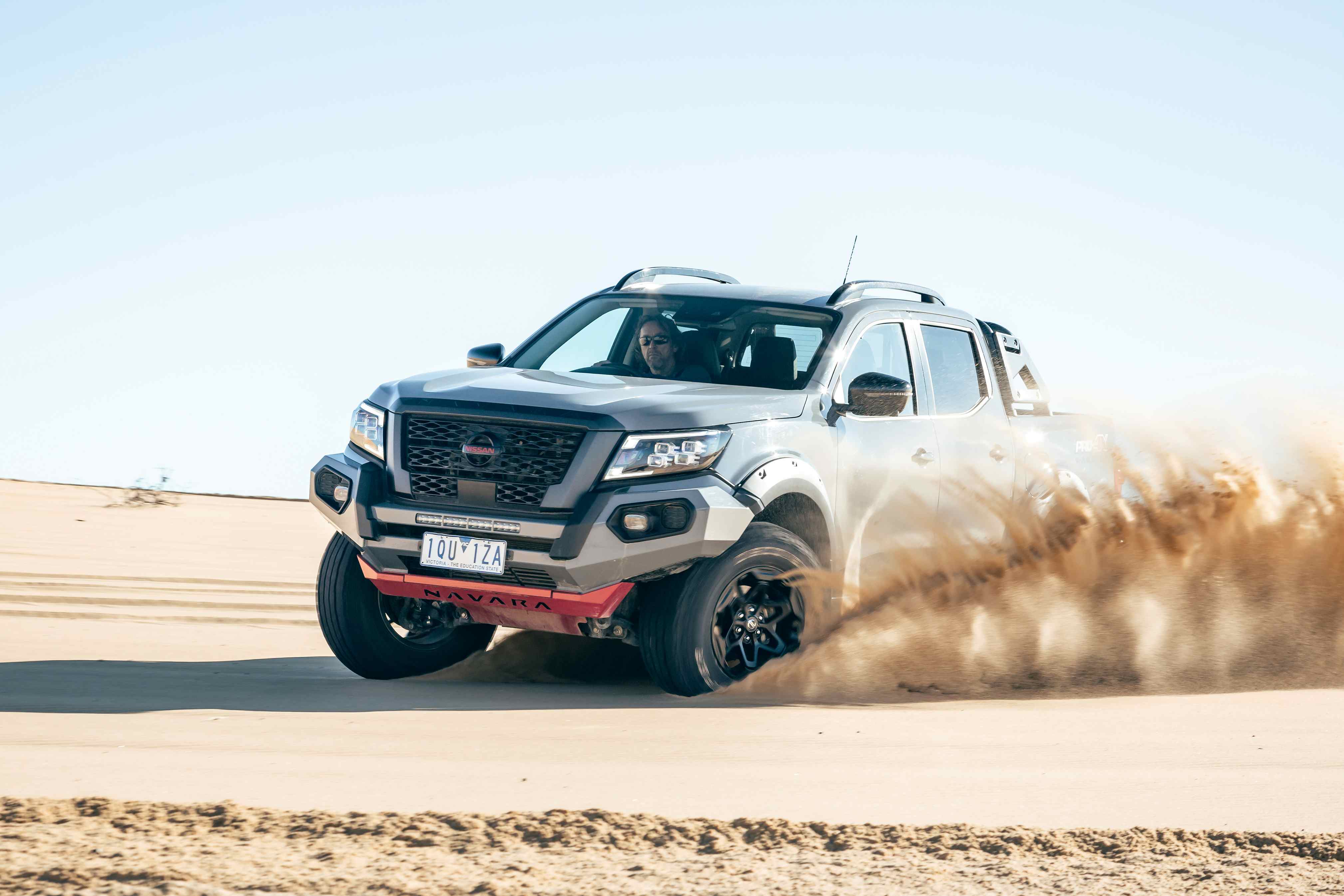 Why go with a manufacturer’s off-road package?

Many serious adventurers upgrade their utility in areas such as the suspension, tyres, winches and other equipment, at times spending tens of thousands of dollars.

Manufacturers such as Toyota, Ford and Nissan believe, with reasonable justification, that the customer is well served if they provide packages to met this part of the market.  In this way all the features are covered under the warranty, modifications have been tested and approved to ADR requirements, the modifications have been designed to ensure that there are no unintended consequences and you do not need to enter into any discussions with your insurance company (at the time of taking out the policy and/or after a claim) about the impact of the modifications. 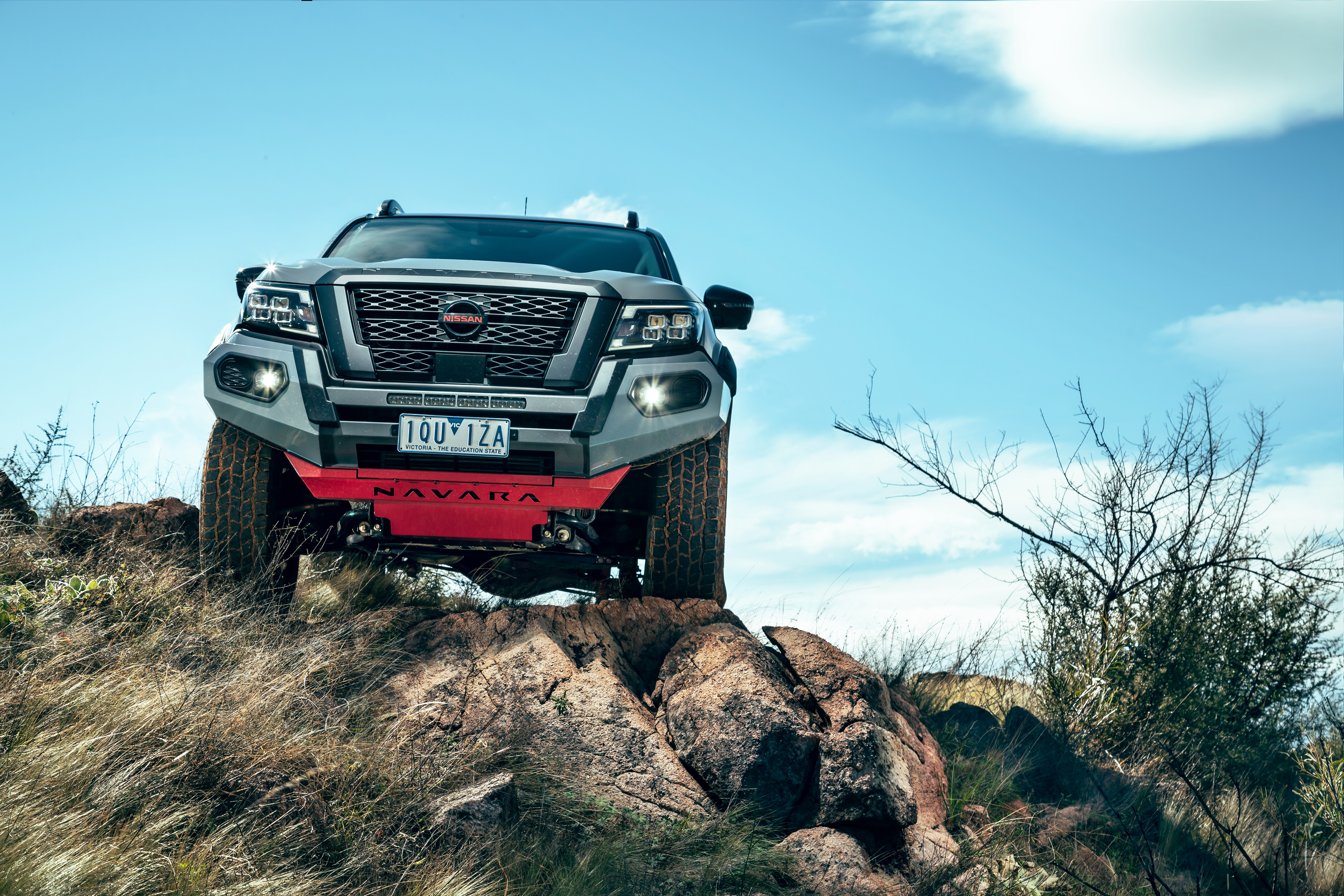 The Pro-4X Warrior makes a statement with its exterior looks. The front bumper bar is a bull bar that juts out like a Hollywood cowboy’s jaw.

It is winch capable but the actual winch in an optional extra.

The bull bar design which is standard on the vehicle does not have loop sections up around the headlights but this, again, is another option.

Under the front rollbar/bumper-bar is a new bright red bash plate with the name Navara boldly cut into its structure. The roll bar in the tray has more structural appearance, the flares over the guards and the large Pro-4X Warrior decals on the hindquarter of the side panel leave you in no doubt about the macho image of the car.

Ground clearance has increased from 220mm to 260mm. The approach angle has also improved from 32 degrees to 36 degrees while the departure angle has decreased but only by 0.8 of a degree down to 19 degrees. 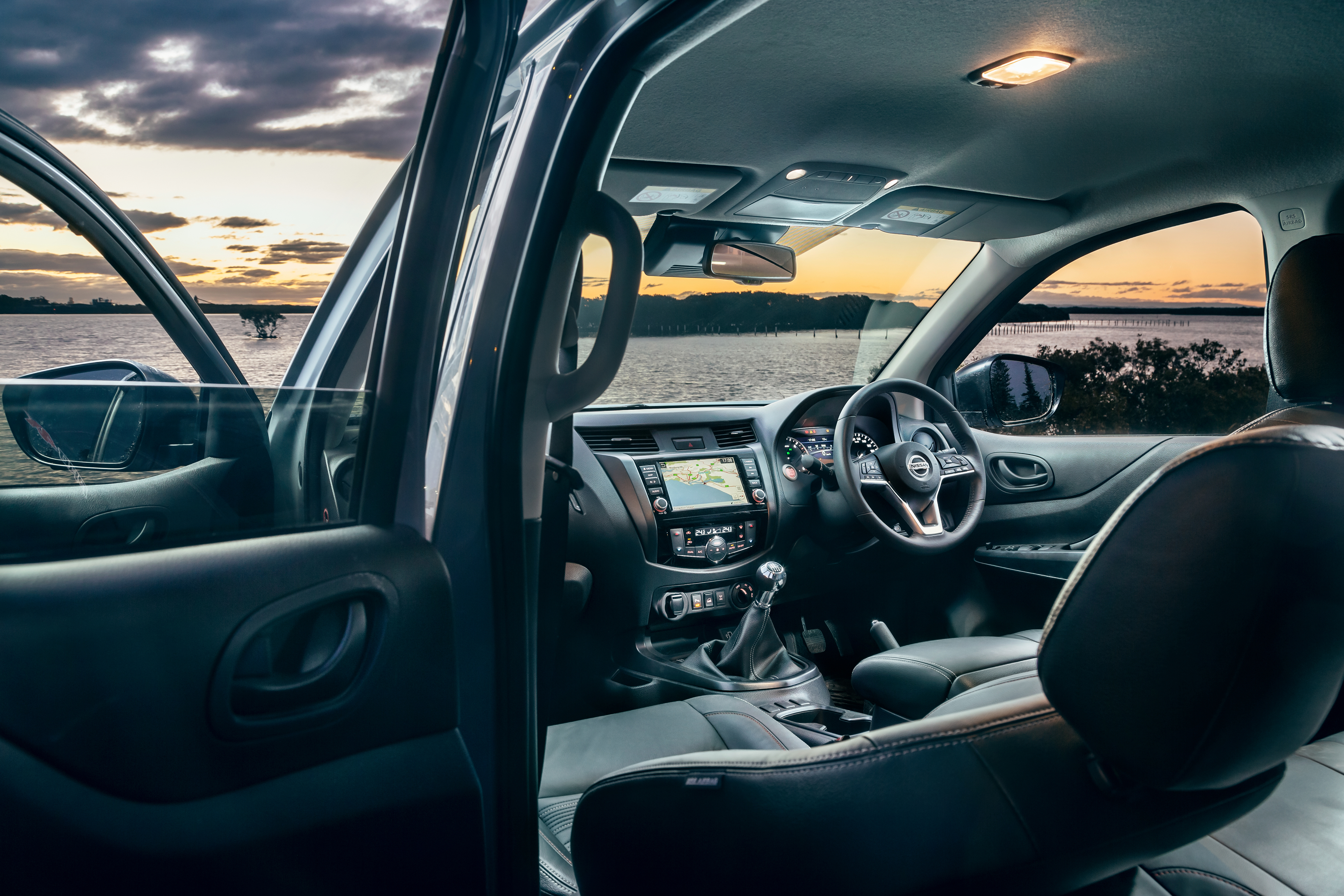 The interior remains pretty much as it was in the N-Trek, the first interaction of the Warrior model name.

The dial layout in front of the driver is traditional with a tacho on the left and speedo on the right and a large 7 inch screen in the middle for information.  Not fancy graphics but eminently readable.

There’s an 8-inch infotainment screen, which also shows around viewing monitoring with moving object detection and it takes able CarPlay and Android Auto.

The layout is similar to most dual cab utes although the Navara does have a small hatch window in the back window out to the tray, that you can electronically open and shut. 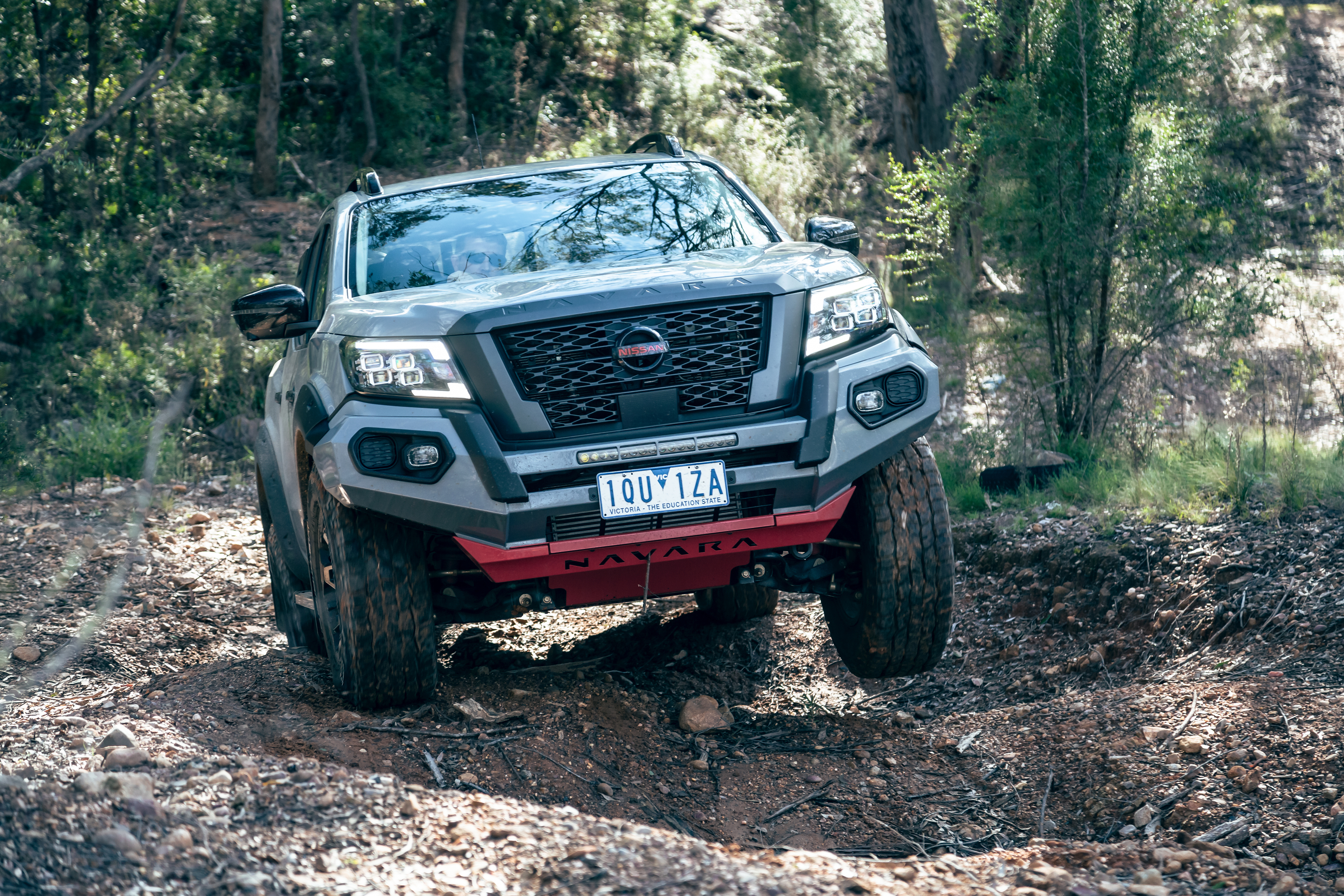 The engine remains the same: a 2.3 litre common-rail four-cylinder twin-turbo diesel which is a little bigger in capacity than the Ford Ranger, but smaller than the Toyota HiLux.

The Pro-4X Warrior has a combined fuel consumption is 8.1 litres per 100 kms but that comes from a good highway result of 7.0 l/100 km but struggling a bit with its urban figure of 10.1 l/100 which is not class leading. 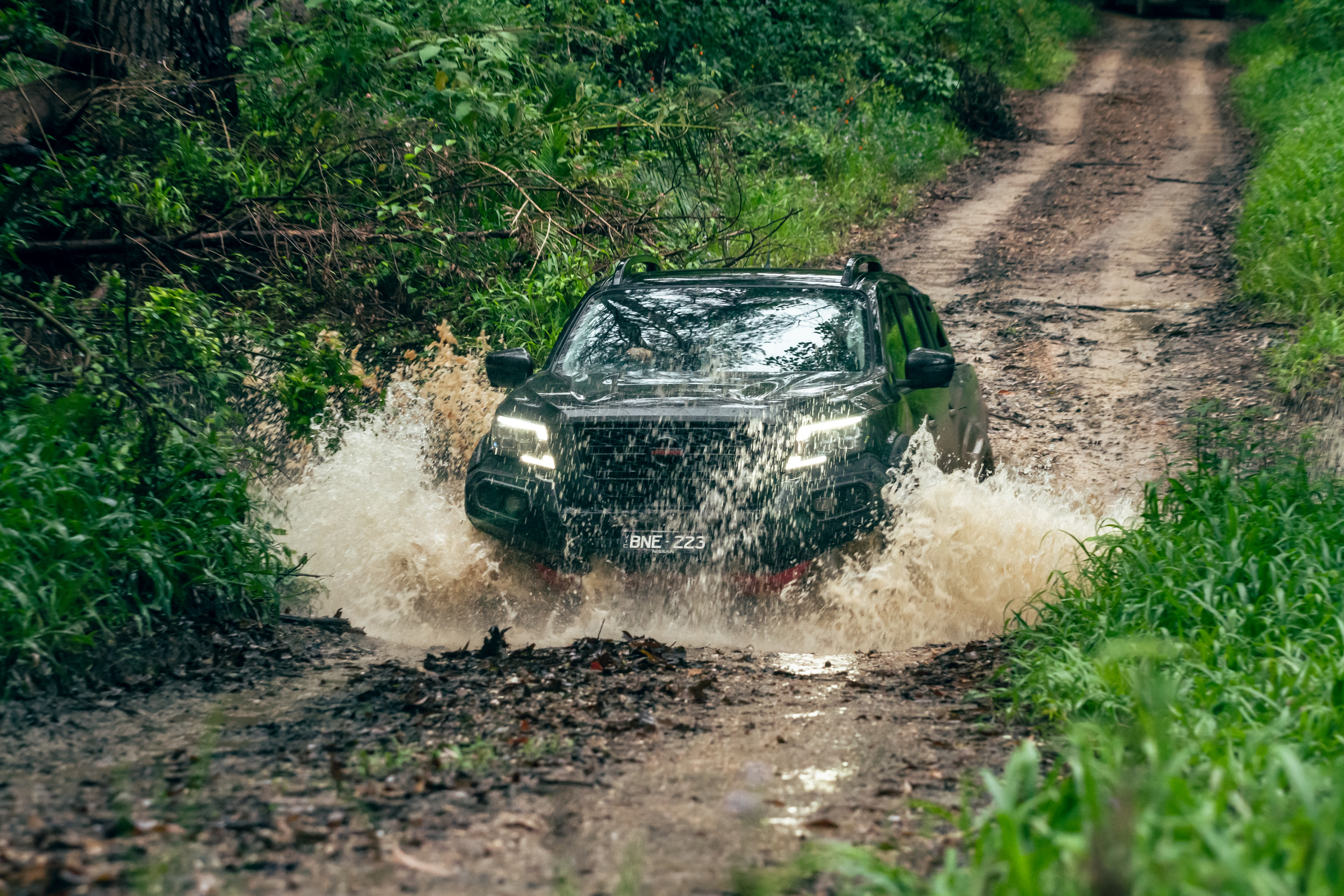 It is somewhat traditional to quickly jump to how an off-road capable vehicle like this handles the rough stuff.

The first impression, however, is on the highway because that is the way you get to the more remote locations.

For all its macho name, looks and talk of beefed-up suspension, it was really very good on the open highway.  It is shod with 275/70/R17 Cooper Discoverer All Terrain AT3 tyres. They have good tread depth but they are not the absolute chunky off-roaders that you can hear coming on bitumen from a kilometre away and make you think about ear plugs when you are inside the vehicle.

For large dual cab ute, the Warrior is really a comfortable touring vehicle that does not wear you out just getting to the start of the adventurous roads.

We also drove it through the hinterland west of Coffs Harbour in the northern part of NSW, with a mixture of moderately graded dirt roads, down to very narrow and slippery bush tracks and creek crossings.  There had been and continued to be some heavy rain.

The cars ahead of us showed good suspension travel.  When the mud was thick the vehicle might have been a bit better with more chunky tyres but it was not a problem. It was easy to get into a comfortable approach at the right speed that, when the car was slipping in an unexpected direction the best think was not to try and correct it as though you were opposite locking on a race track, frantic yanking at the wheel, but to apply enough steering and let the car pull its self out.

We drove the automatic models and you were hardly aware of the effort of the powertrain.

The Warrior has a good range of vehicle control systems, including

It was good to see that it also had a driver’s knee airbag.

But you cannot option up some features that are available on the luxury Navaras such as seat warmers. 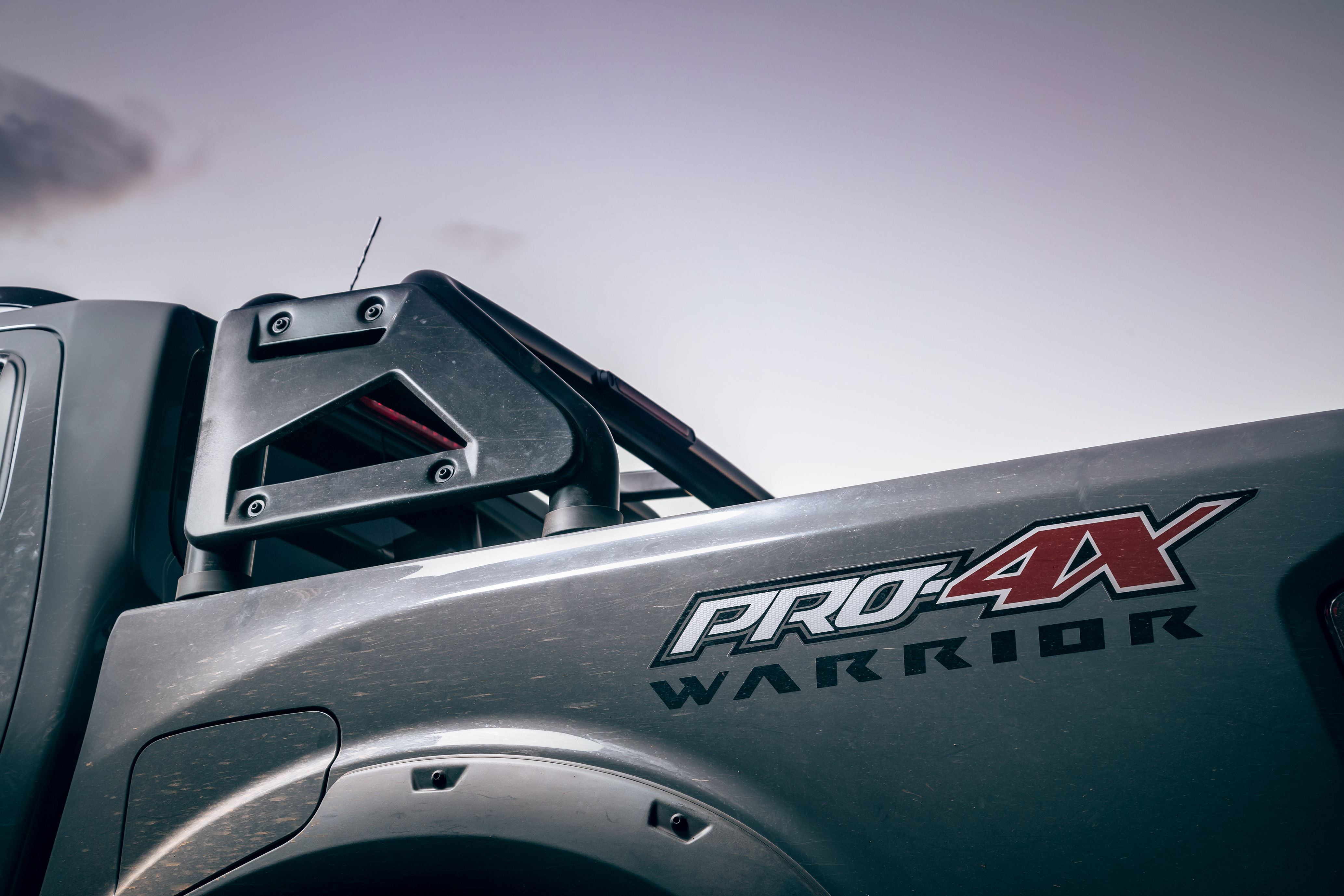 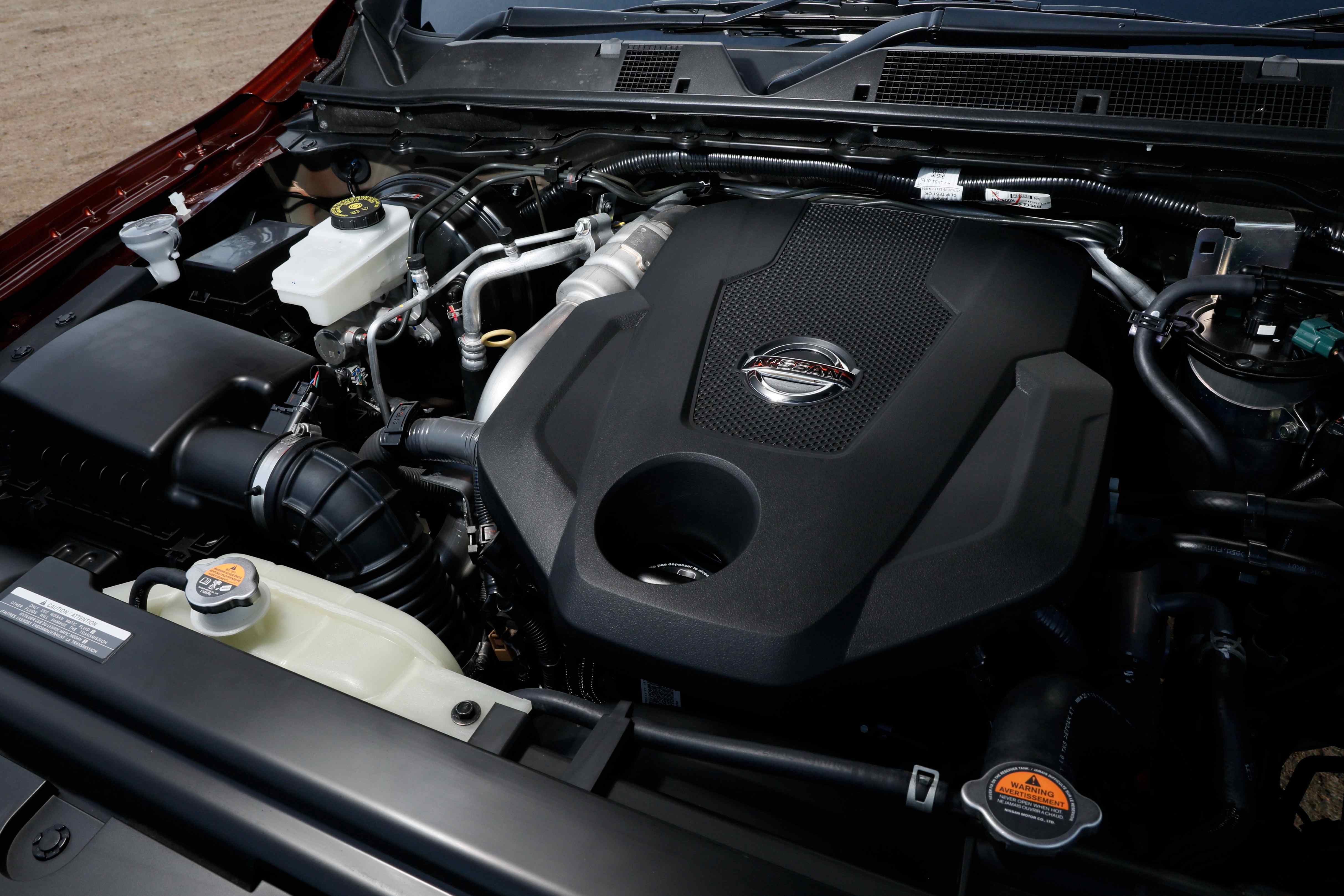 Road Side Assist:     5 Yr. conditional roadside assist (part of a package you can purchase)

About David Brown 10 Articles
David’s boyhood passion for motor cars did not immediately lead to a professional role in the motor industry but rather first he worked in the fields of why we travel and how we move about. A qualified Civil Engineer he specialized in traffic engineering and transport planning. What followed were various positions including being seconded to a government think-tank for the planning of transport firstly in Sydney and then for the whole of NSW. After working with the NRMA and as a consultant he has moved to being an independent writer and commentator on the broader areas of transport and the more specific areas of the cars we drive. His half hour motoring program “Overdrive” has been described as an “informed, humorous and irreverent look at motoring and transport from Australia and overseas”. It is heard on 22 stations across Australia. He does weekly interviews with several ABC radio stations and is also heard on commercial radio in Sydney. David has written for metropolitan and regional newspapers and has presented regular segments on metropolitan and regional television stations. He has been an important part of the COTY awards for OzRoamer

The Isuzu LS Terrain D Max dual cab ute is at the top of our wish list for a robust, heavy duty, responsive, long living, capable 4wd and tow vehicle. We loved it and it very nearly won our Dual Cab Ute of the year award last year. You won’t find better at the price […]

Significant upgrades to the 2015 Holden Colorado range include the introduction of ‘Comfort Suspension’, a premium interior upgrade and a new acoustic package to improve noise and vibration, all whilst remaining at current 2014 pricing. […]

2012/13 OzRoamer 4×4 Dual Cab of the Year Award Introducing the best Dual Cab utes in a no holds barred shootout. […]