Toyota’s legendary LandCruiser turns 70 today – an historic milestone being celebrated in Australia with the release of special-edition versions of the rugged LandCruiser 70 Series off-roader. 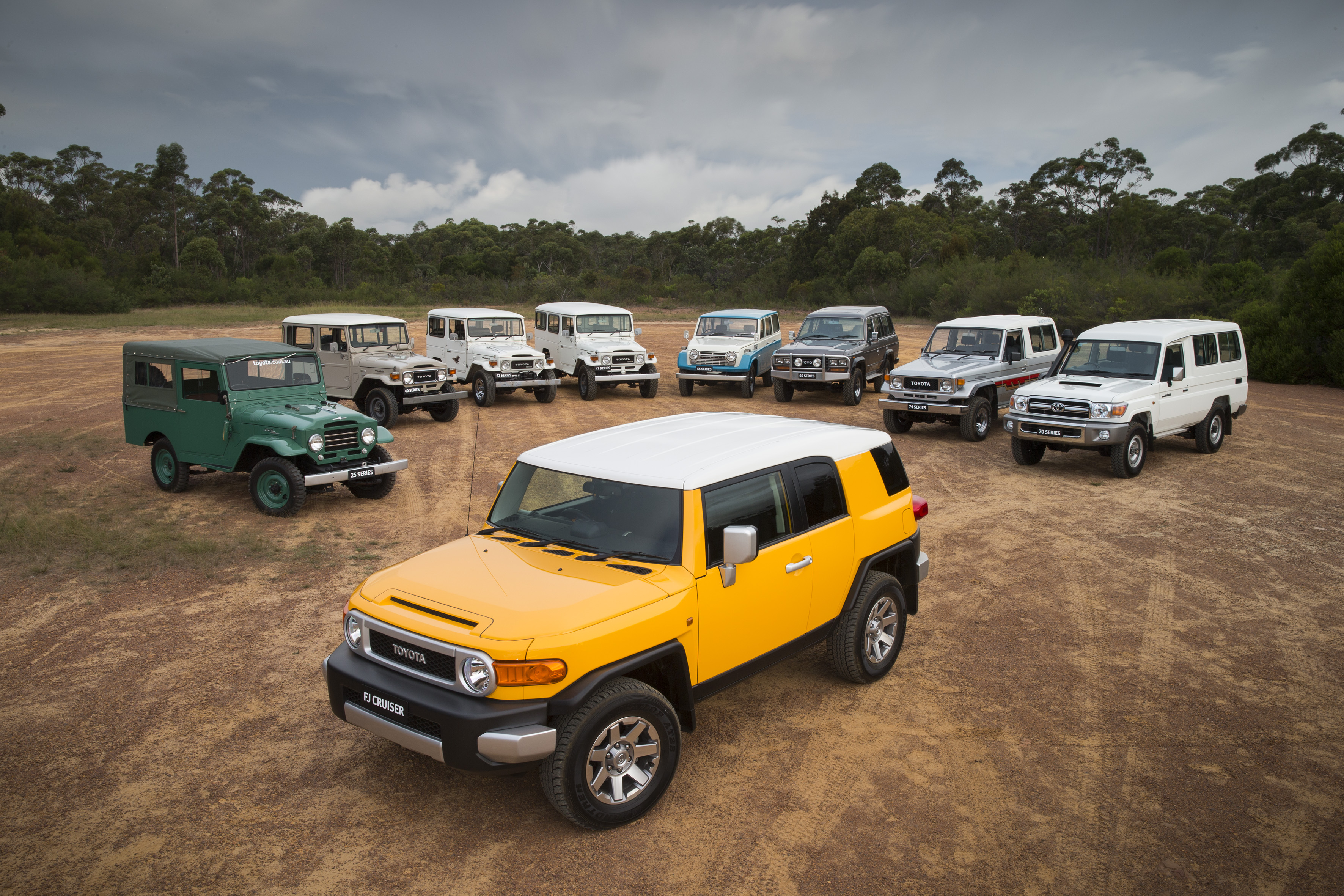 The platinum anniversary marks the 1951 Japanese debut of the Toyota BJ, which three years later was renamed LandCruiser – a brand that has been proudly displayed on more than 10 million vehicles sold worldwide.

The special-edition model – available in single-cab, double-cab and wagon variants – features bold styling enhancements that complement LandCruiser’s rock-solid off-road reputation and ability to conquer some of the harshest terrain on the planet.

Toyota Australia Vice President of Sales, Marketing and Franchise Operations Sean Hanley said Australian customers had made LandCruiser the icon it is today with 1.14 million having been sold locally.

“The LandCruiser nameplate has earned legendary status in Australia, with a decades-long track record of durability and reliability in the toughest conditions our country has to offer,” Mr Hanley said.

“The 70th Anniversary special-edition is a tribute to the many LandCruisers that came before it, helping Australians navigate our harsh and rugged environment, whether that’s through the desert, across the mountains or deep in the forest.

“The icing on the cake as we celebrate 70 years of LandCruiser will be the all-new 300 Series that we will launch later this year with the capability, performance and comfort to take Australians further than ever before,” he said. 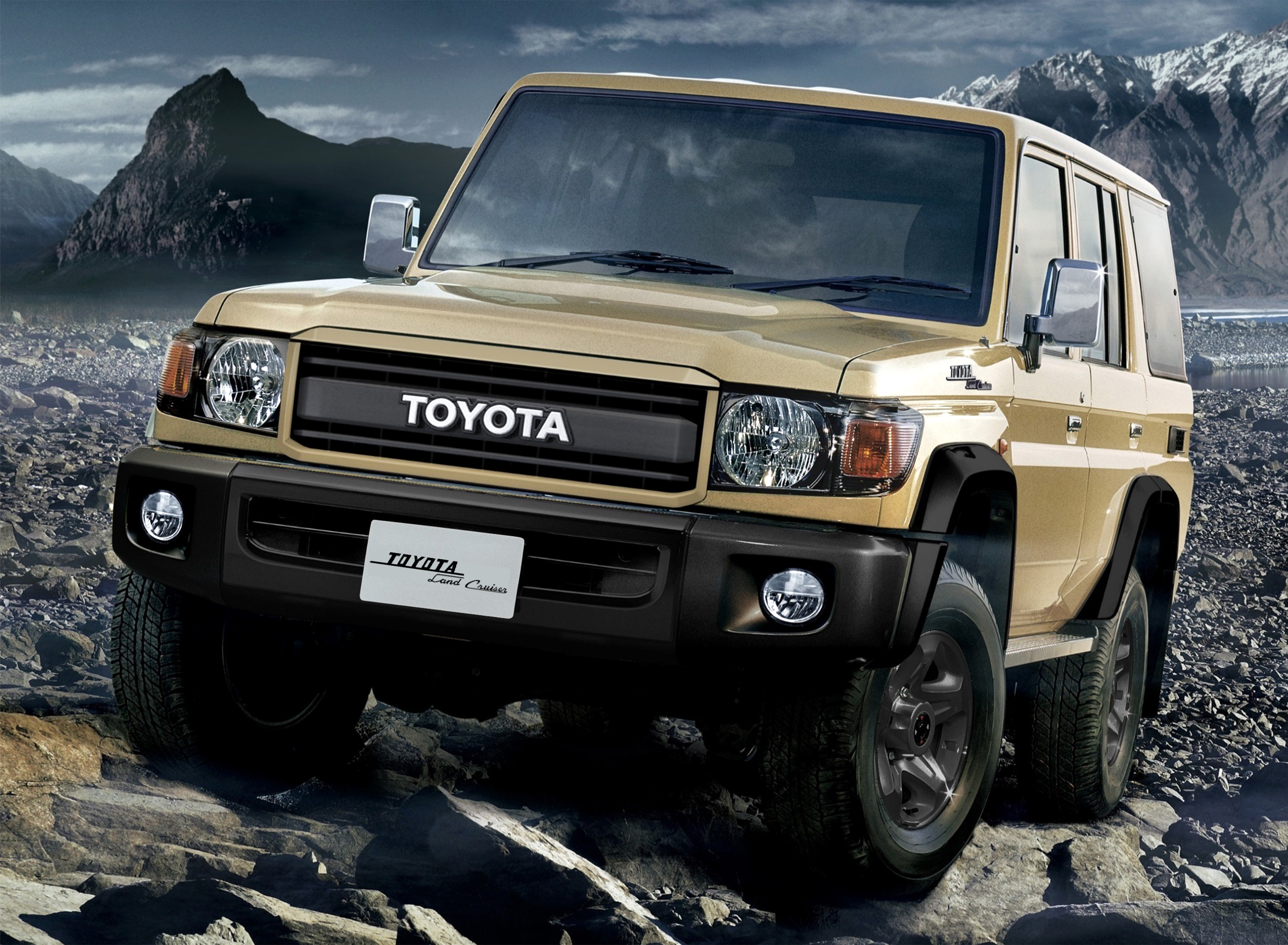 The LandCruiser 70th Anniversary special-edition is based on the flagship GXL grade and will be offered as a 76 Series wagon and 79 Series single and double cab chassis pick-up.

Externally, it is distinguished by the black heritage grille with ‘TOYOTA’ lettering, matching the black front bumper and wheelarch flares.

The stealthy treatment continues with darkened 16-inch alloy wheels and headlamp bezels, while the front foglamps and daytime running lights have been upgraded to LED units.

Marking the anniversary is a ‘Heritage’ LandCruiser badge above the front wheelarch, as well as a ’70th Anniversary’ emblem.

The seats are clad in premium black upholstery, while black leather-accented trim has also been applied to the steering wheel and gear shifter. 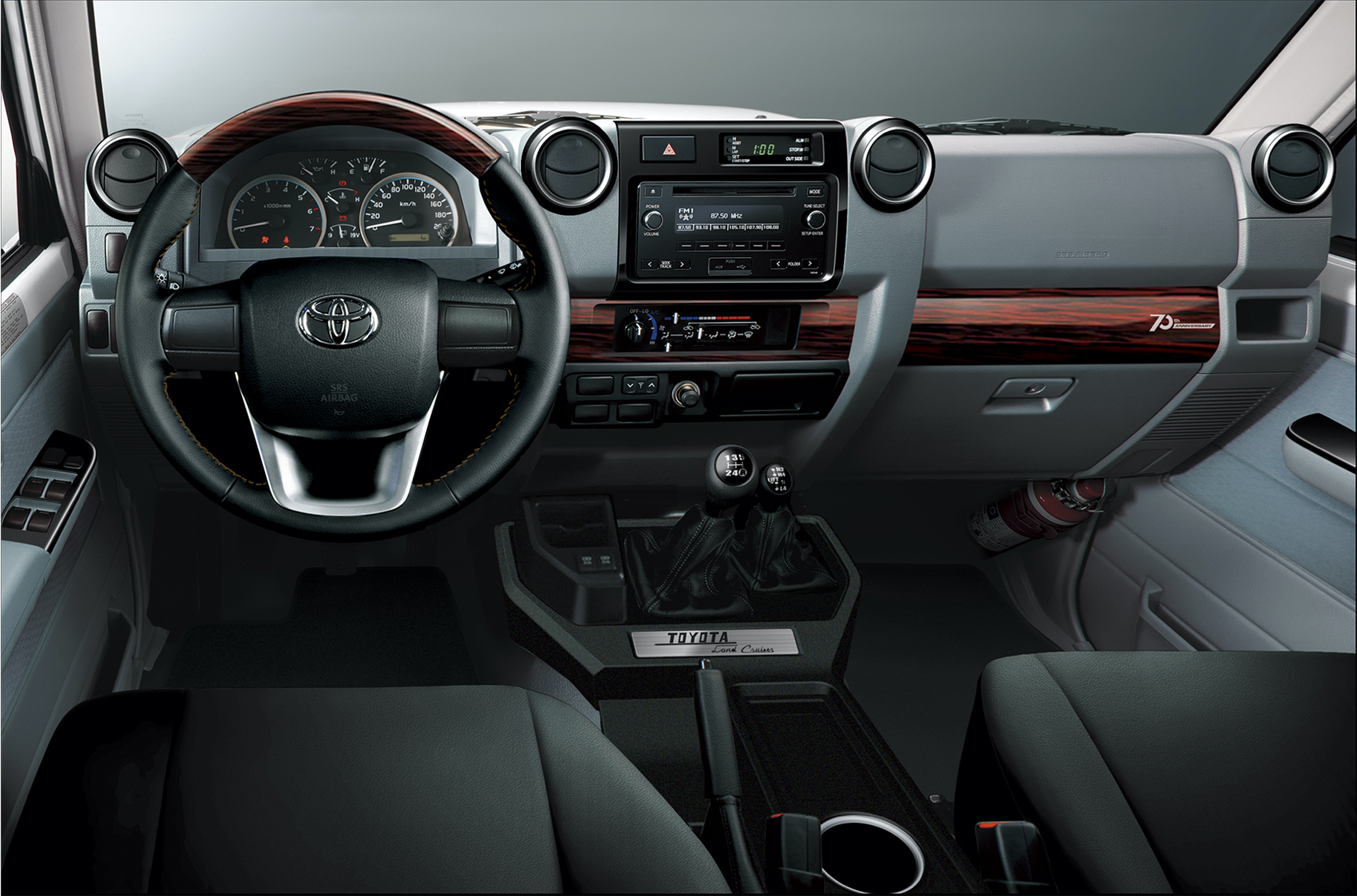 The interior’s ambience has been further enhanced with a woodgrain-look trim and instrument panel, silver accents for the air vents and black treatment for the switch trims on the doors.

A newly designed black centre console has also been fitted, complete with two additional 2.1-amp Type A USB chargers and a pair of cupholders.

All versions are powered by the strong and durable 4.5-litre turbo-diesel V8, producing 151kW/430Nm and teamed to a five-speed manual transmission. 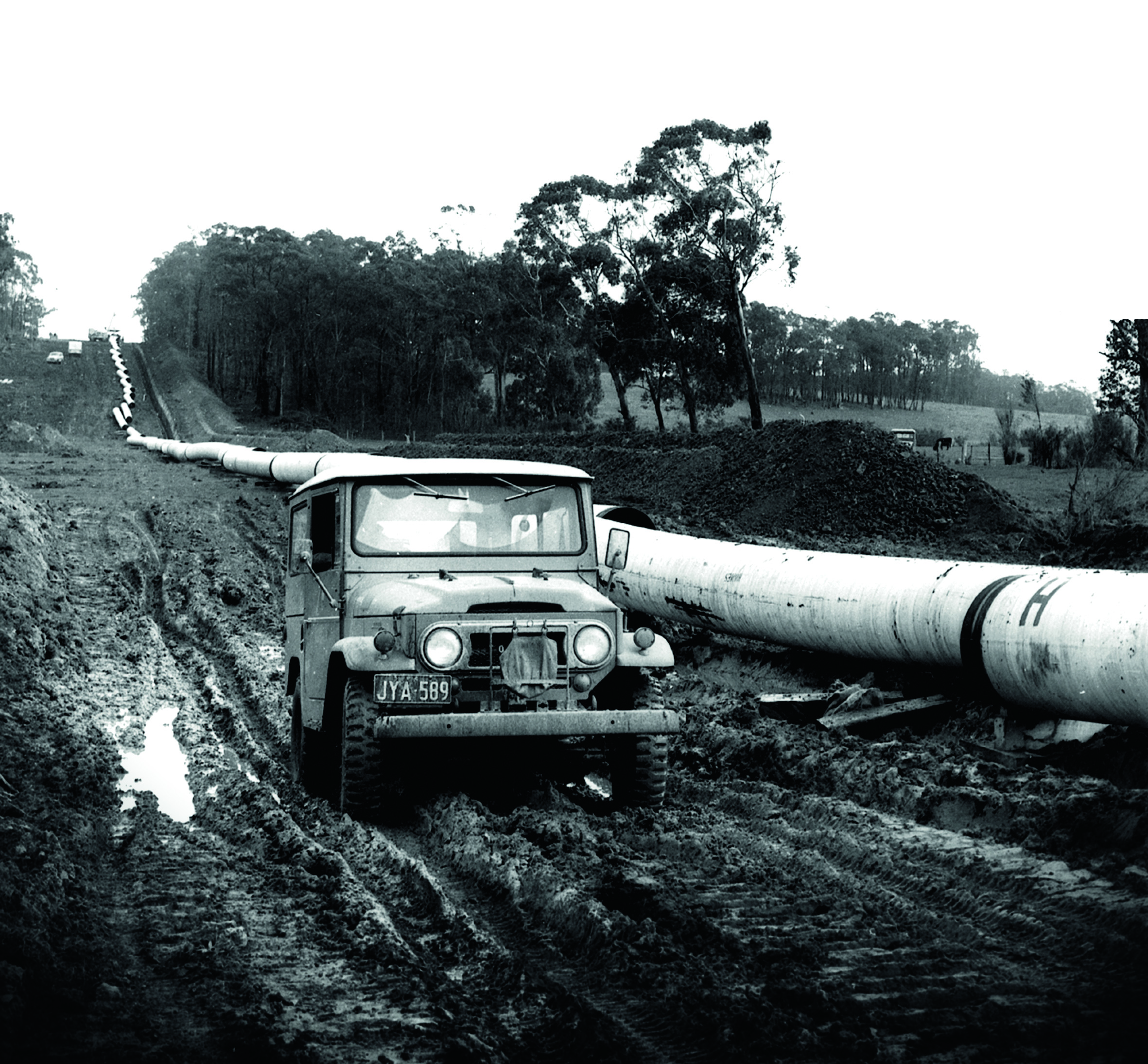 A look back at LandCruiser

The LandCruiser story began in 1951, when Toyota originally developed the BJ four-wheel drive for use by Japan’s National Police Reserve.

Powered by a 3.4-litre six-cylinder petrol engine, the military-style 4×4 featured few creature comforts: it had open sides and a folding fabric roof.

Its capability was proven when Toyota test driver Ichiro Taira drove a prototype to the sixth of 10 checkpoints on the 3,775m Mt Fuji – higher than anybody had thought possible in a four-wheel-drive vehicle. 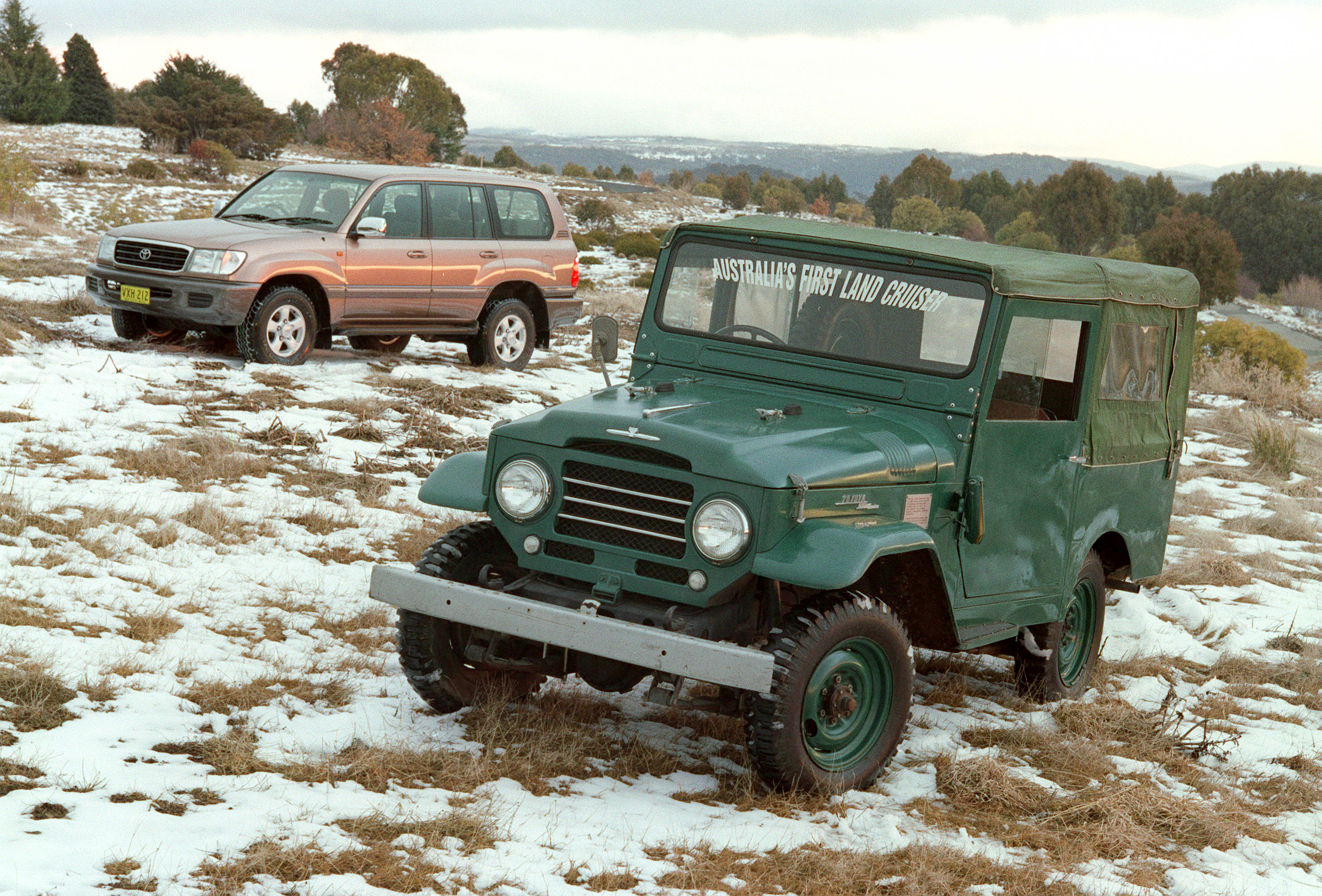 In 1954, the name was changed to LandCruiser. The following year, the second-generation was launched with a redesigned look better suited for civilian use.

Greater choice was offered with three wheelbase lengths and configurations including a soft-top, pick-up, two-and four-door vans and even a fire engine.

With this generation, Toyota started to eye potential export markets, notably Australia where its extreme off-road capability and legendary durability and reliability have made LandCruiser the vehicle of choice for miners, explorers and farmers.

But the vehicle’s fame in Australia came when construction magnate Leslie Thiess imported several LandCruisers for use on the rugged construction-site trails of the Snowy Mountains Hydro-Electric Scheme. 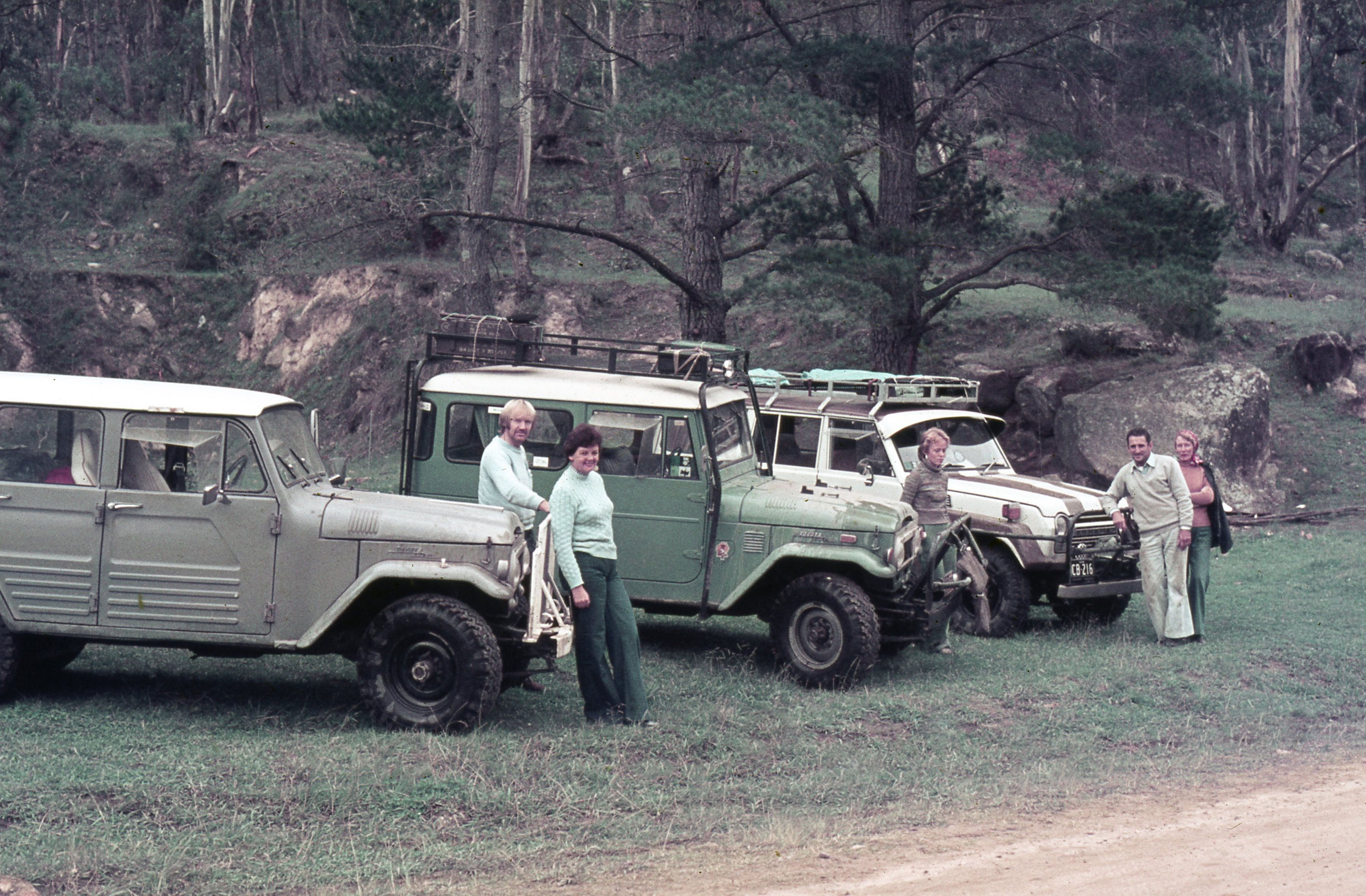 The arrival of the 40 Series in 1962 helped propel the LandCruiser nameplate to legendary status in Australia as a rugged performer that perfectly suited the Australian environment.

With a 24-year production run, the 40 Series was also offered with a range of bodies and wheelbases, however its utilitarian nature spurred Toyota to develop a more family-friendly iteration, that landed in the form of the FJ55 station wagon in 1969.

With more space and comfort, the FJ55 was designed to be equally at home cruising a sealed highway as it was tackling an off-road track and it excited recreational drivers across the country.

The 40 and 55 Series ran alongside each other throughout the 1970s, while the arrival of the all-new 60 Series wagon in 1981, which introduced new technologies including electronic fuel injection, turbocharging, diff locks and automatic transmissions.

The beloved 40 Series was replaced in 1985 by the heavy-duty 70 Series, bringing improvements to styling, ride comfort and driveability, while building on the LandCruiser’s reputation for extreme durability and reliability. 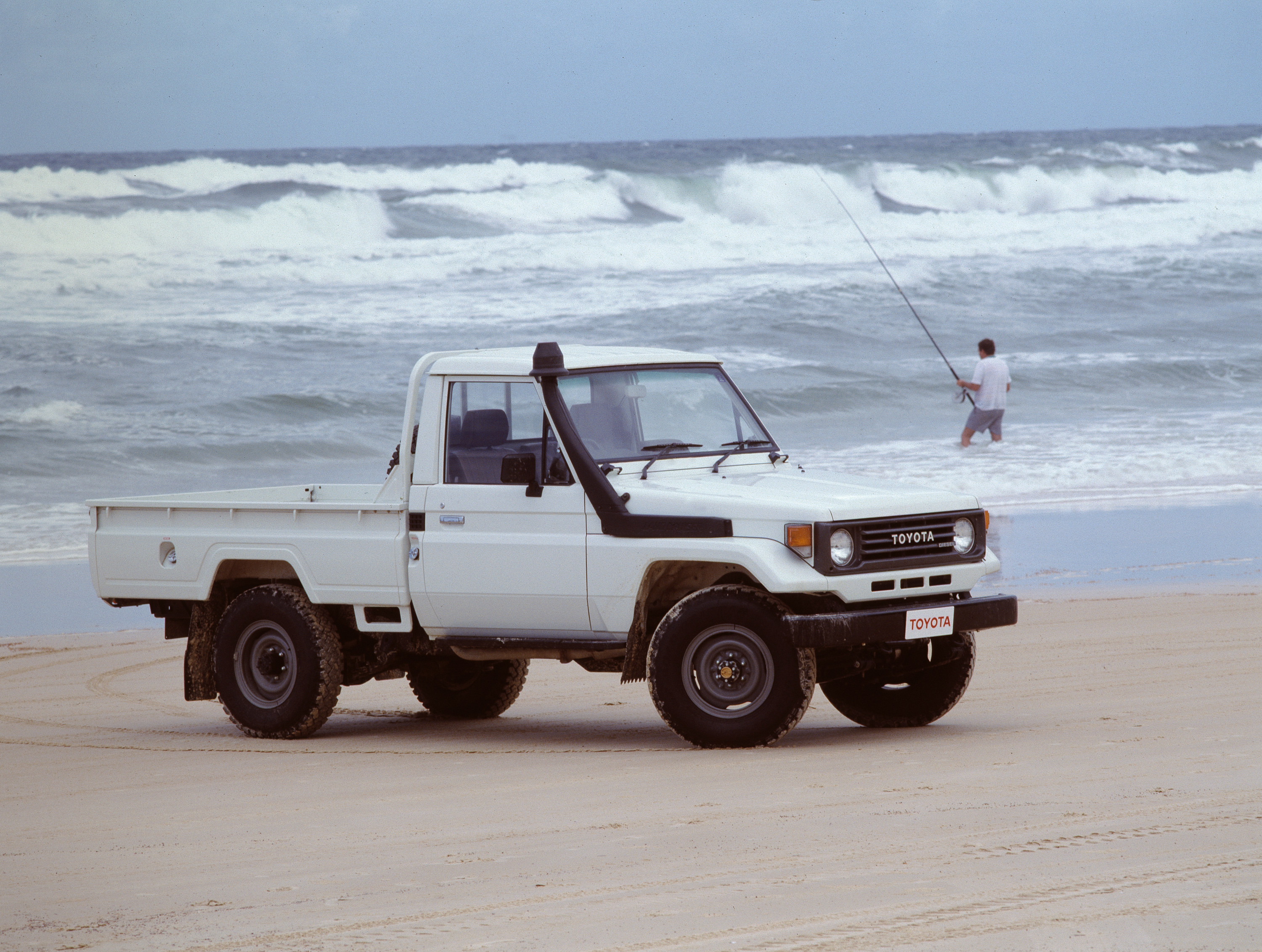 The following year, Toyota saw a growing recreational market that didn’t need a vehicle as large as a 60 Series but wanted the comfort and style more akin to a passenger car.

This model, with a coil sprung suspension and interior comforts, was sold in Australia as the Bundera – the start of a new line of LandCruisers that would become the LandCruiser Prado.

In 1990, the 80 Series LandCruiser arrived as a successor to the family-friendly 60 Series, bringing a raft of improvements and features.

With its optimal dimensions, coil springs, live axles and optional differential locks, the 80 Series delivered a new high-water mark for off-road ability in the LandCruiser family.

While the first-generation Prado launched internationally in 1990 was not sold here, Toyota Australia picked up the baton left after the Bundera was discontinued with the second generation LandCruiser Prado in 1996.

Offered with a 3.0-litre turbo-diesel four-cylinder and 3.4-litre petrol V6, the Prado offered a more affordable and passenger-oriented alternative for LandCruiser fans.

Its bigger brother, the LandCruiser 100 Series arrived in 1998 to replace the 80 Series, introducing independent front suspension to the flagship LandCruiser line-up for the first time, offering better on-road handling and comfort.

The 120 Series Prado landed in 2003 with a new platform and design, finding favour with more and more Australian buyers.

In 2007, the LandCruiser was overhauled with the introduction of the 200 Series. A major facelift for the 70 Series saw the inline six-cylinder engines swapped out for the now-familiar 1VD 4.5-litre turbo-diesel V8.

The 150 Series Prado was revealed in 2009 and has proven a hit with Australian families, often topping the sales tables in the hotly contested large SUV segment.

Regular upgrades include the 2015 introduction of a high-torque 2.8-litre four-cylinder turbo-diesel engine that now generates 150kW and 500Nm.

With the all-new 300 Series around the corner, the next chapter of the LandCruiser story will soon be written, building on the legacy of its forebears while making wholesale improvements to technology, performance and luxury.

About Rob Fraser 1024 Articles
Rob Fraser – General dogsbody & Director Rob is the founder of the business. He constantly mutters something about way too many red wines one evening being to blame. He first learned to drive on the farm in a left hand drive WW11 Jeep when he was 11, many years ago. He has maintained a strong interest in the industry ever since and was hooked on 4WDriving way back then. Having previously lived at the top of corporate life he retired in 2000 and hasn’t put a suit and tie on since. Cars are his passion so why not have a business doing what you love he figures. He has towed either a caravan or camper trailer to most parts of Australia, has run guided tours for camper trailers’ and instructed drivers in off road towing Often known for taking the 4WD in the driveway over the sports car, he has travelled pretty much everywhere in Australia and when he is bored goes for a drive.

Toyota LandCruiser 300 Series has six models, with two new models added to the range. The Sahara ZX for buyers wanting even more luxury and the GR Sport, for buyers that want even more off road capability. […]

The Toyota LandCruiser 300 Series has been a much-anticipated release with speculation running wild as to whether it could live up to the precedent set by the 200 Series. […]