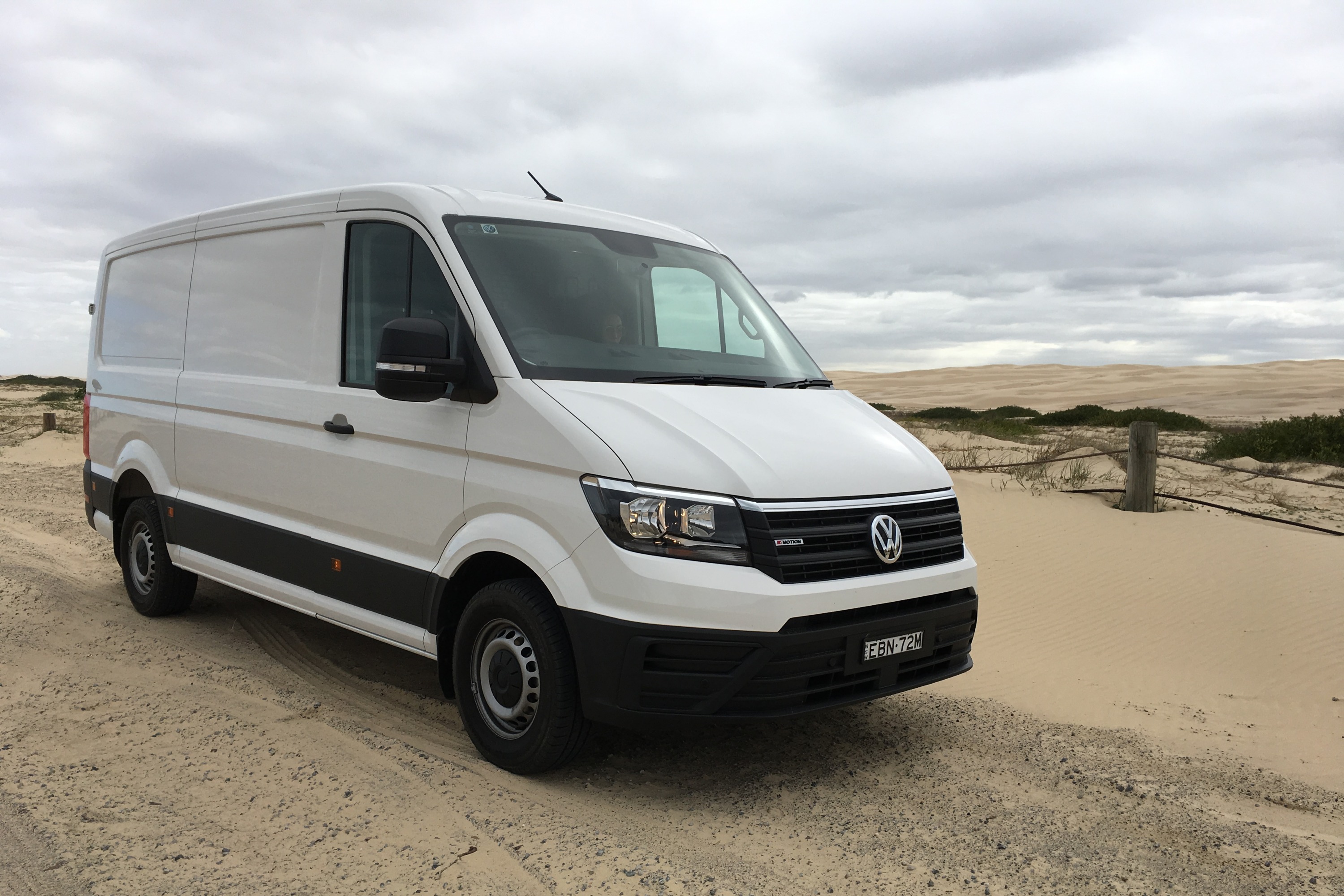 Whether it’s for a delivery van or a campervan base, the VW Crafter has always been a popular choice, but now they have added something extra to make it even more special. Rob Fraser and David Brown tell us what.

Volkswagen have added their 4MOTION capability to the popular Crafter van and for the reasonable price of around $4500 instead of $10,000 plus for some of its competitors.

Living the motoring and touring lifestyle with Rob Fraser and David Brown from ozroamer.com.au

DB Rob, what have you been testing?

RF I just recently drove the latest VW Crafter van where they’ve actually added their 4motion system to it to make it an all-wheel drive van.

DB Is this a bit like the old Kombie but modern?

RF It’s a size above the Kombi. 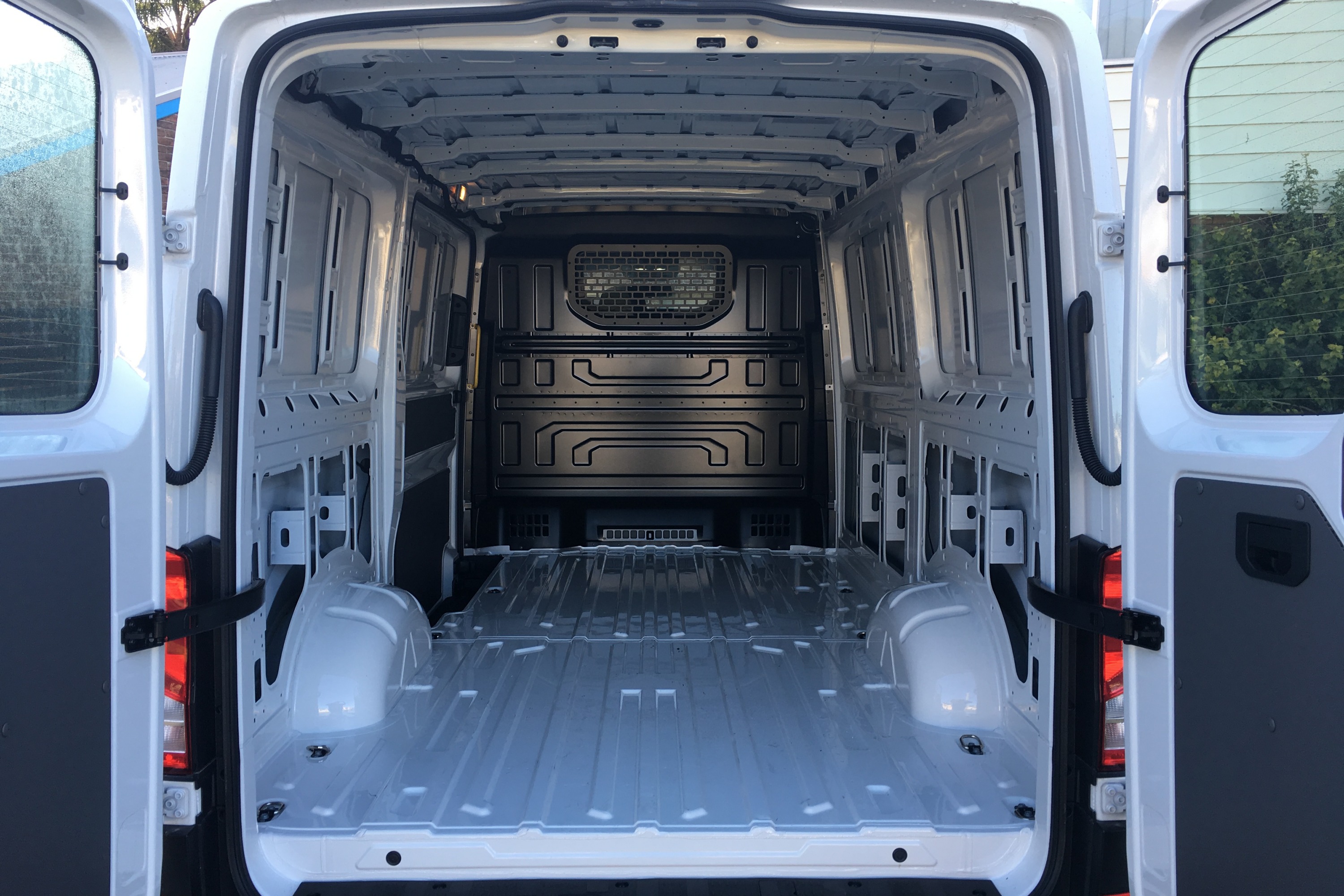 DB So it has a campervan out in the back. Does it have a stove and things?

RF The particular one I drove was a shell, but they use them and a lot of people use them for do it yourself type camper vans. And there are a number of manufacturers who also use them for the camper vans as well.

DB Could I specify what I want? I could personalise it with an aftermarket manufacturer.

RF Look, it’s possible. What you tend to find with the likes of those manufacturers is they get the van and they come up with two or three different designs and now they’ll build those because it gives them economy of scale.

And for the most part, they’re pretty good at designing the interior to get the maximum effectiveness out of it, although there is a strong element of the market that likes to do it themselves. There’s certainly an option for people to do that, to build it themselves. 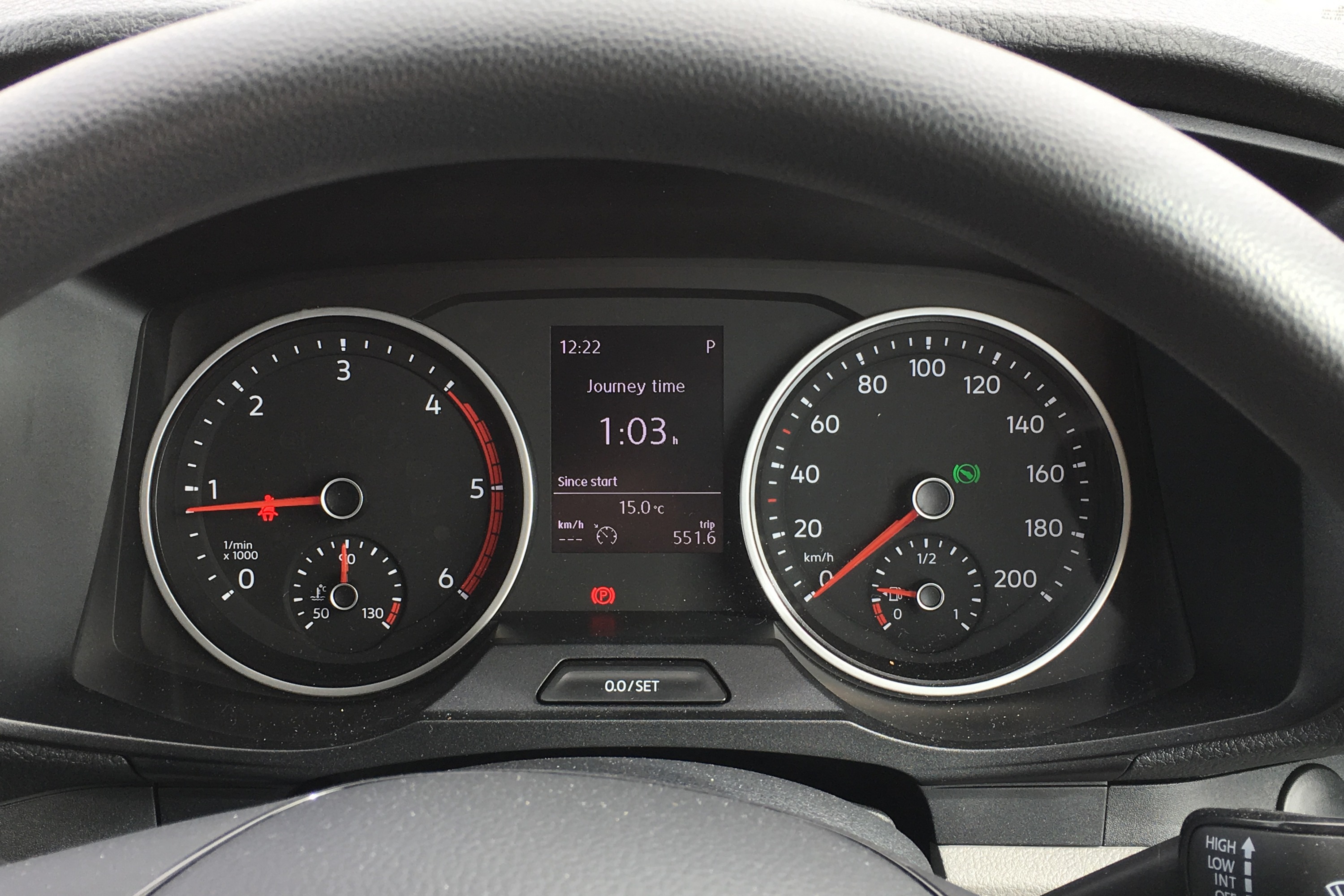 RF The thing I liked about the crafter is when you’re driving a number of these sort of vans, you realise how different it is. I drove the Crafter for a week. I did a lot of kilometres in it because I was up and back down to Sydney quite a few times.

And apart from the minor aspect of me having exceptionally long legs and therefore a slightly different angle onto the accelerator, it was unbelievably comfortable, drove like a larger car and it just cruised along. I really enjoyed it. I could see myself sitting in this and driving for days and days and days touring around Australia. 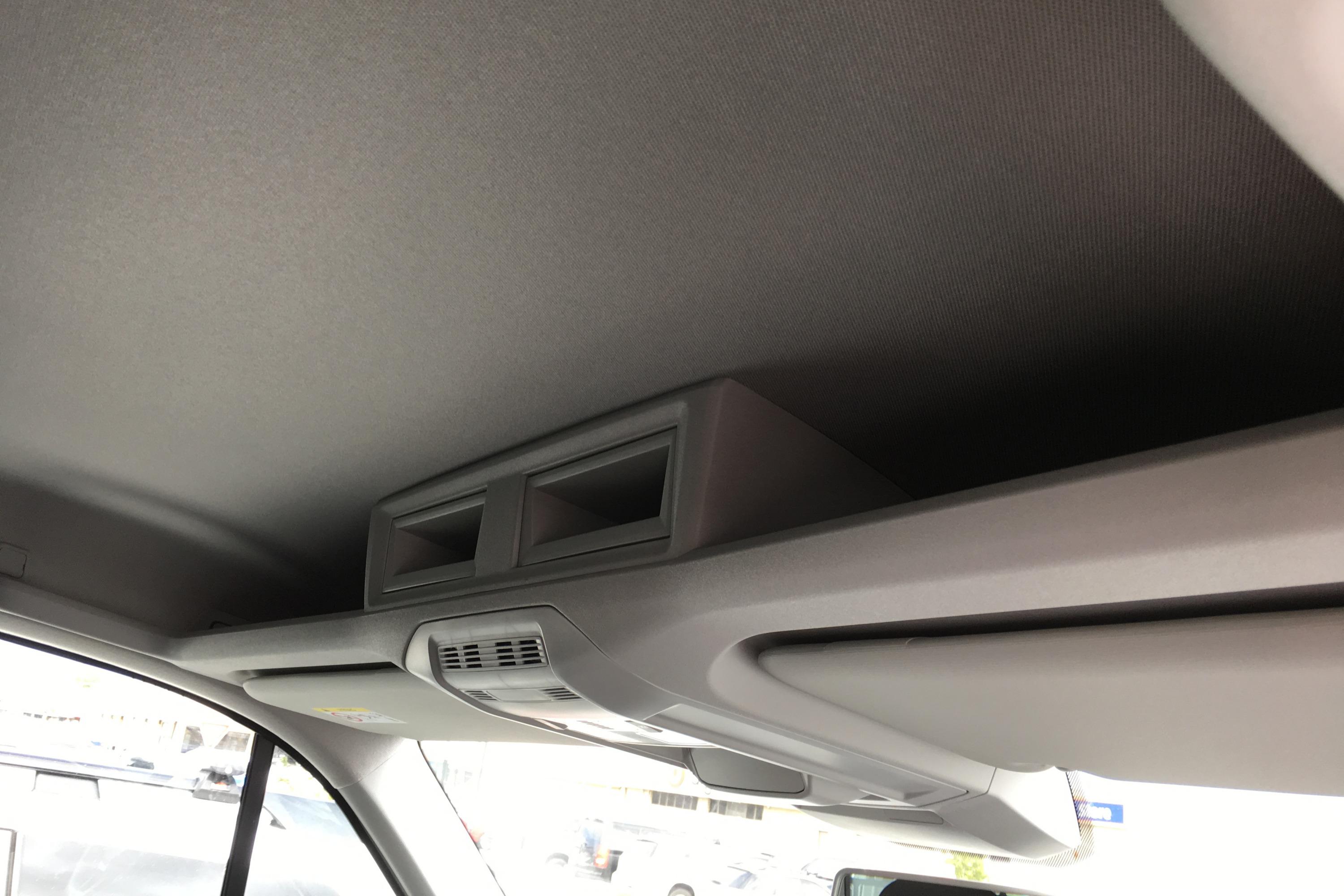 RF Well, you’re sitting more upright than you are in a car, but you’re not sitting up like a truck. No, I mean, you climb up into it. 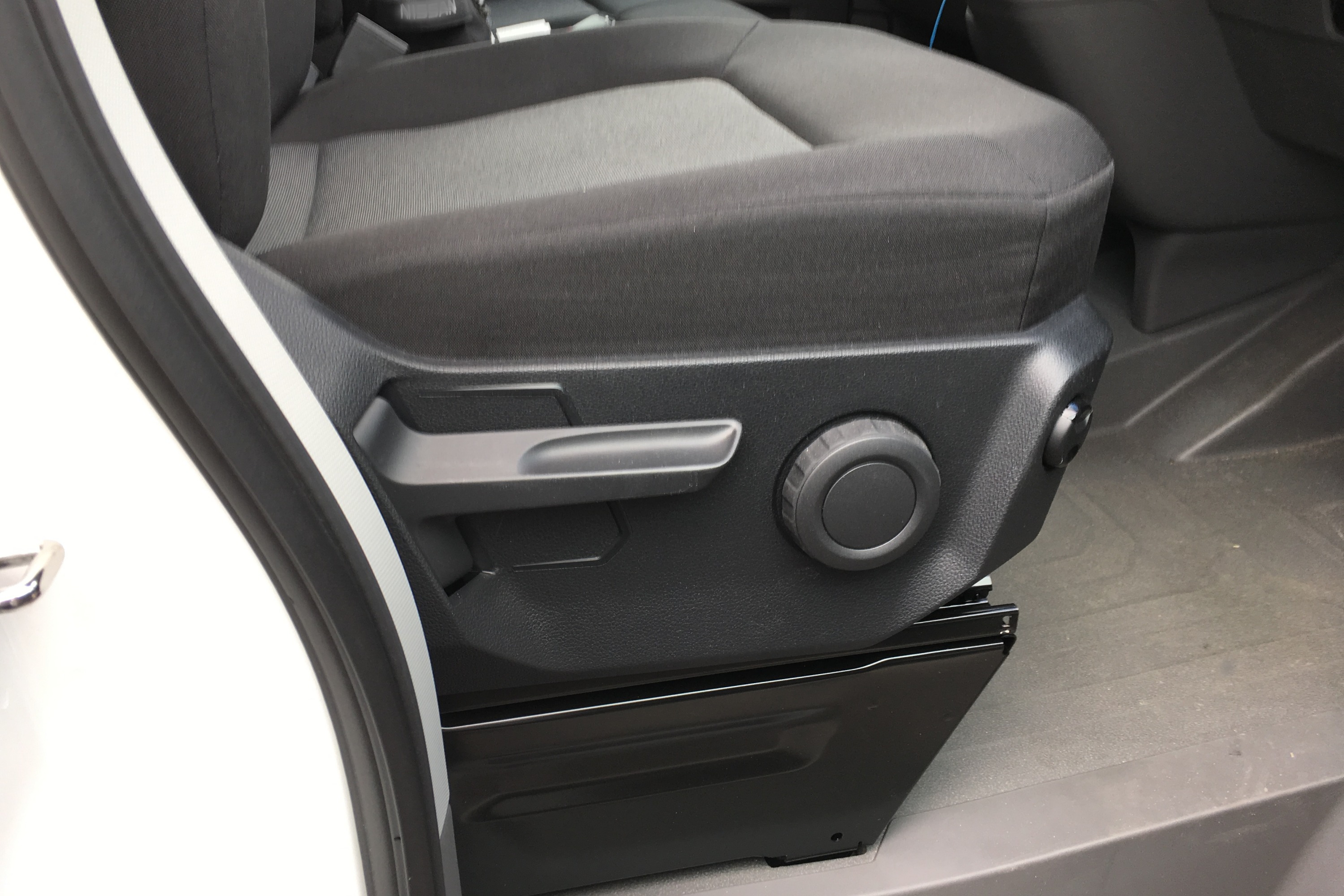 So it’s it’s more than a kombi van or a Hi-Ace van or an iLoad or something like that. So it is that next level up. You do climb up into it, but you don’t hit your head, which you do on a lot of vehicles. There’s plenty of headroom, plenty of leg room. And there is an enormous amount of individual little storage areas that are already built into the van itself. 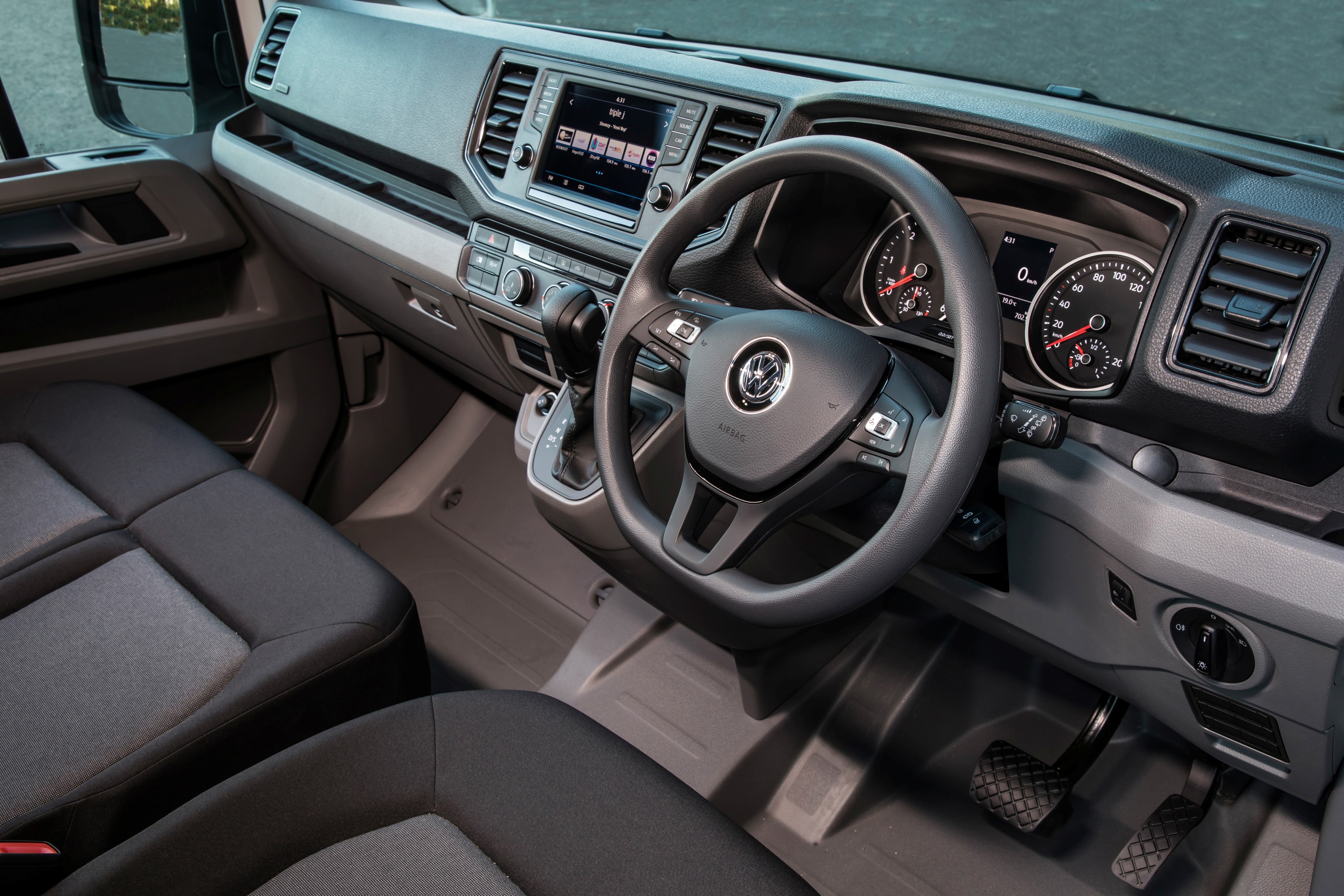 If you wanting to have a clipboard so that you’ve got the map where you’re going through to any anything you want to be carrying in a number of bottle holders, etc.. The interior layout is really well done. And importantly, there’s a couple of hidden storage areas underneath the front seats. 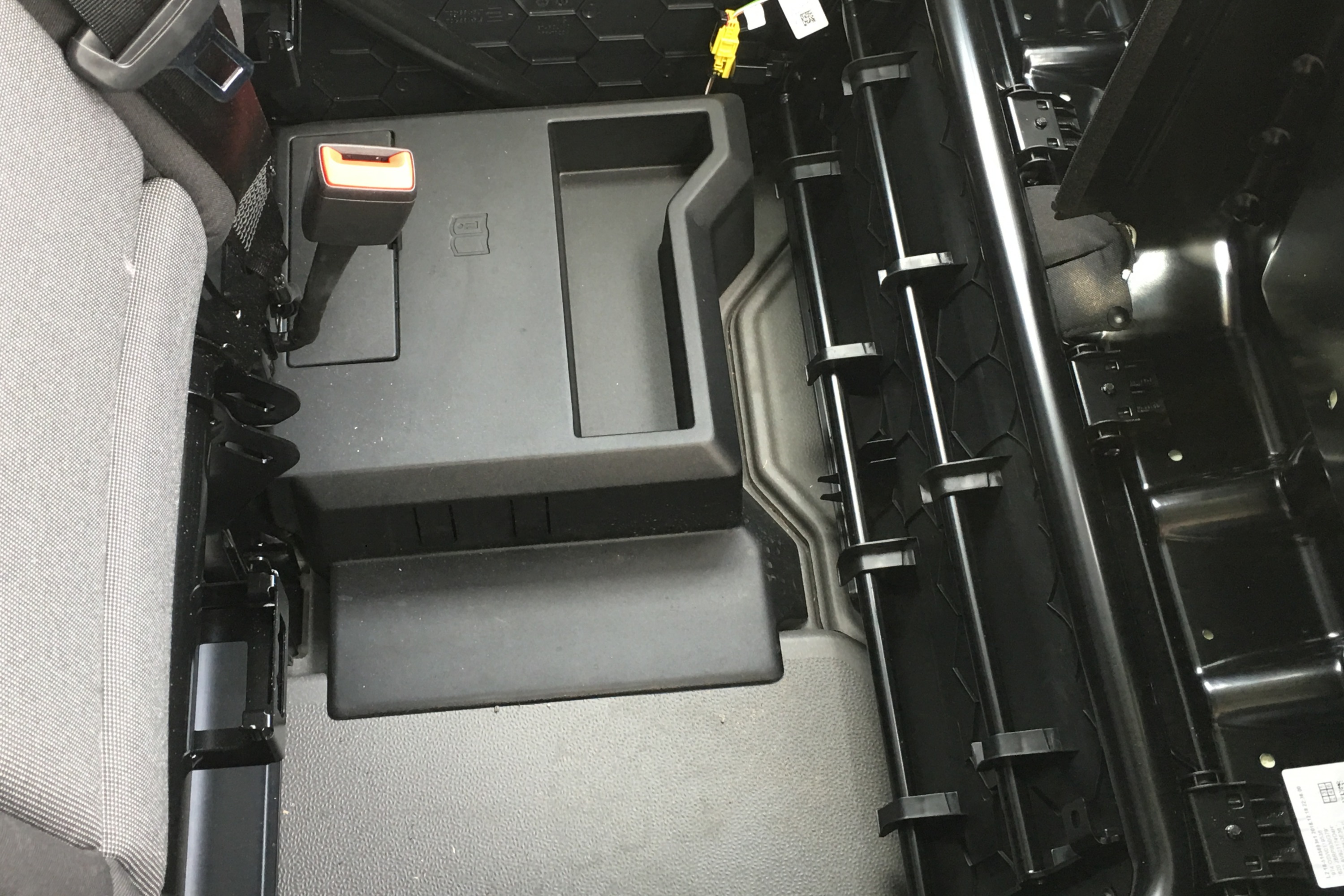 RF Absolutely. Yeah, great idea. People put a lot of the things in those and it hides things away from prying eyes.

DB Is it actually divided between the passenger and the driver and the back of the van?

RF Yeah. The particular variant I had what I call a cargo barrier. There was a full height barrier in there between the front and back. But if you’re doing it as a camper van, you remove that so you could literally walk through into the back area. 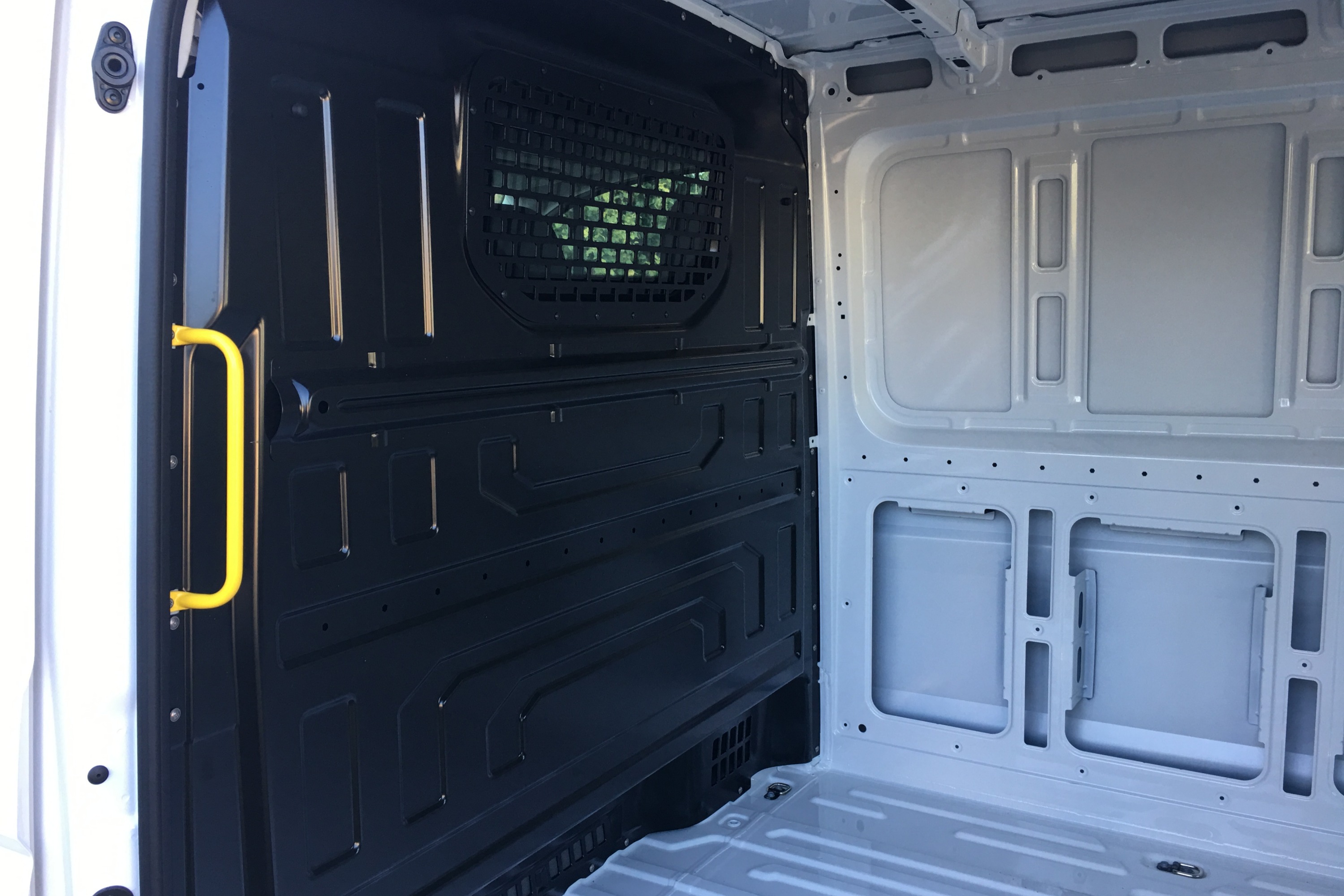 DB The type of improvements that you can get to it, does that include a bed and things like that?

RF Volkswagen supplies it purely as a base vehicle. That’s really just a shell. But the good thing about this particular shell is a lot of internal infrastructure that you can attach walls and cupboards and anything to that you want to do.

And that’s why the likes of a lot of manufacturers such as Tracker and those they really like these type of vans because a lot of the work is already done for them in being able to secure what they’re going to put in there.

So you can’t order from Volkswagen with camper van option. People can buy and do it themselves or they can go to one of the manufacturers and say, look, this is the vehicle I want it to be built on. Can you do that for me? 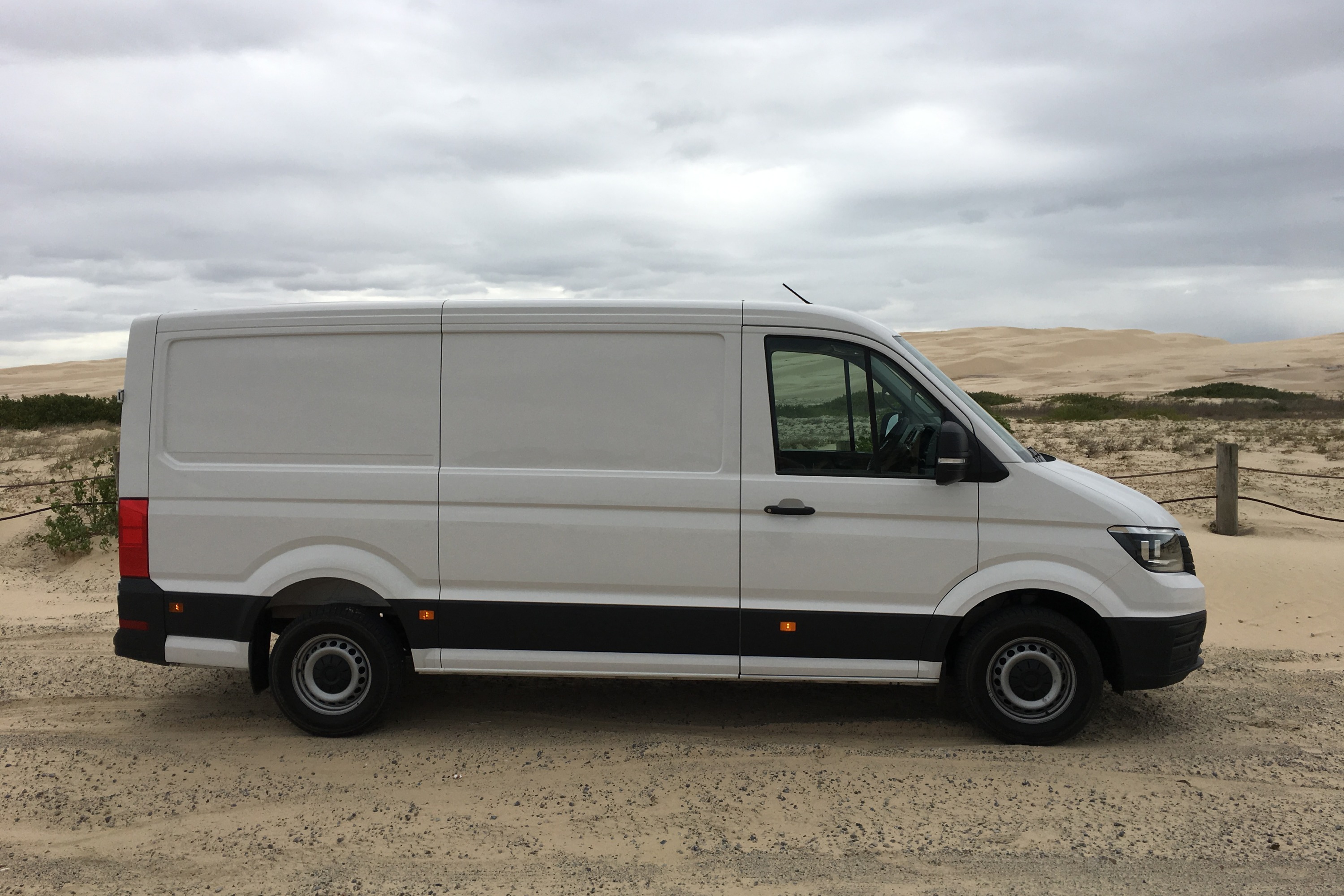 DB Is it then a complete camper? Can I stop, sleep and eat in the thing? Once I get Tracker and that to do something with the interior.

RF Absolutely. You’ve got a bed, fridge, kitchen, stoves, cupboards. Some even have showers and toilets in them. It’s amazing what they can fit into these small areas or they’ll have it attached to the outside. So you can literally travel in his camper there for 12 months around Australia. 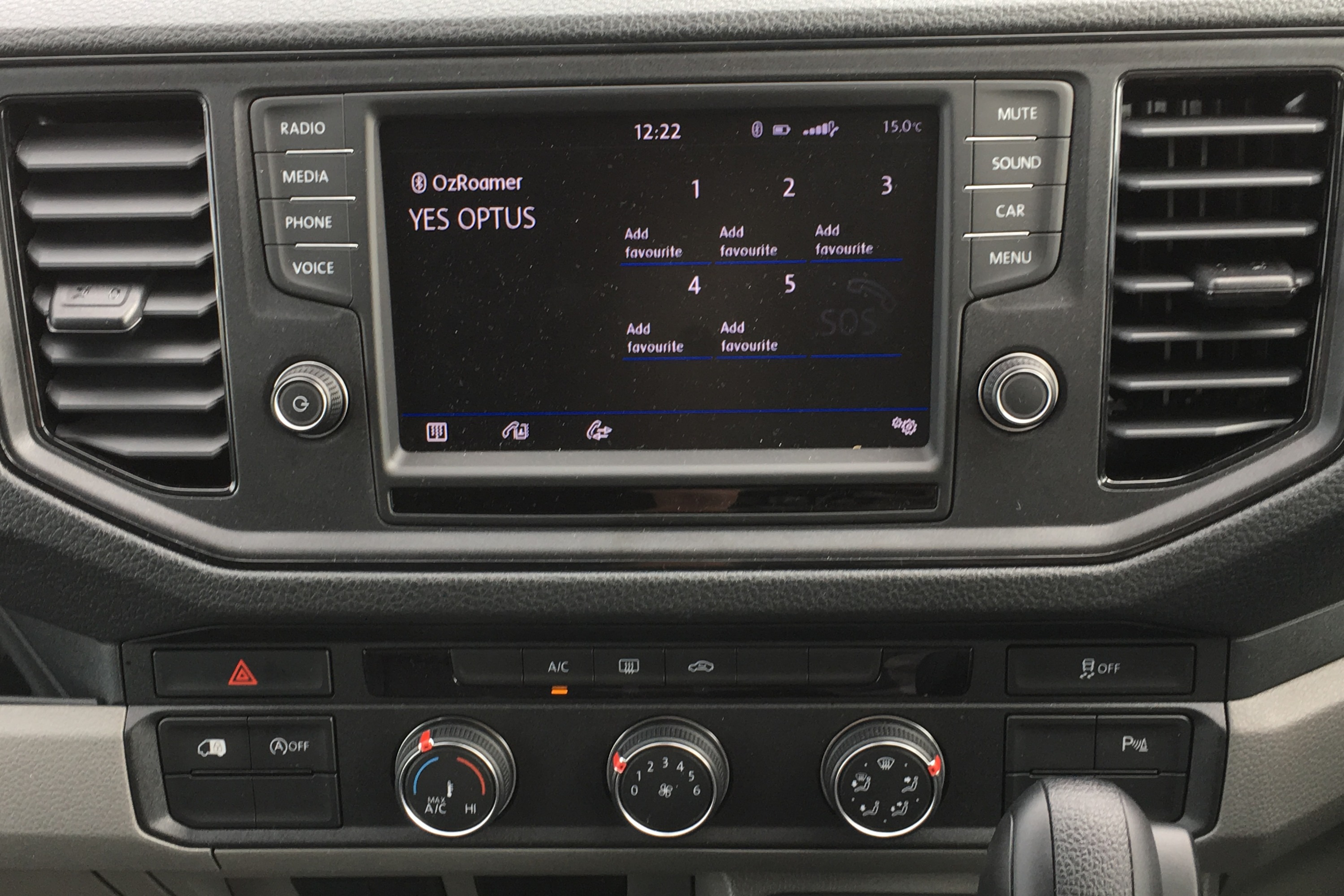 DB What are they worth ranging from about $45,000 and up and the 4rmotion system adds about $4500 to the price of it, which is cheap compared to a lot of the competitors and there’s a lot of different variants. So you’d really need to decide which one you want, but they want a long-wheelbase where they want a high roof variant or that type of stuff, but they’re actually reasonable value.

DB And what would it cost me to deck it out in a fairly standard package?

RF Look, you would be looking anywhere between eighty thousand dollars plus depending upon the quality of what you’re going to put in there.

DB So you’re talking hundred thirty plus to sort of get one on the road,.

And if you want to see, hear and read more from Robin, David, go to www.ozroamer.com.au

VW Amarok is best for the active weekender, tradie, or anyone with a bunch of stuff to tote around. It’s not really for towing or solid off road work. […]

Avida Escape is a unique campervan

Escape to the far reaches of Australia after the Covid-19 lockdown with the latest Avida Escape Campervan. […]

VW has launched a new addition to its campervan range. The Caddy Beach. The Caddy Beach is equipped with advanced safety technology and is priced from $49,990 drive away  […]