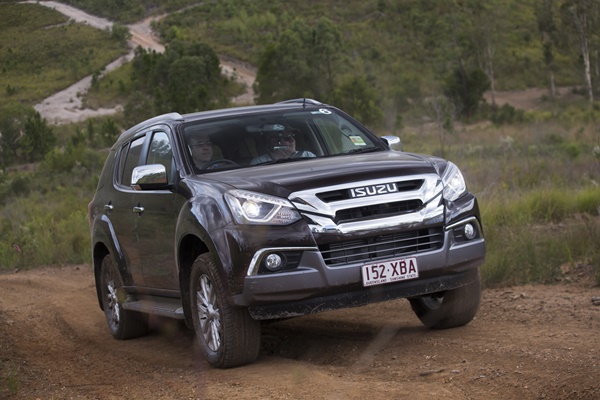 The Isuzu MU-X has long been a favourite here at OzRoamer, having won the coveted ‘7 Seat 4WD Under $60,000’ three times since it was originally launched. It has always been a well-balanced 4WD that had outstanding ride and handling considering it is Ute based. The problem is that over the ensuing years the competition has moved forward and the Isuzu has stayed the same.

The competitive advantage that the Isuzu MU-X has always had is its stylish good looks, exemplary road manners, rugged off road capability, outstanding reliability, durability, longevity and renowned value for money. There have been some shortcomings but overall it has been extremely successful and rightly so. We have reviewed the MU-X numerous times over the years.

Enter the revised 2017 model update that addresses many of the shortcomings of the present model. I had the opportunity to drive the latest update at the launch last week and left impressed, but with all the improvements there are still some areas that need attention. More on that later. 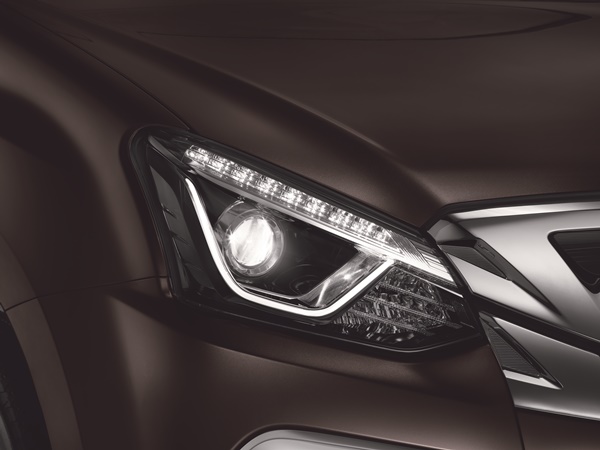 Externally there is a redesigned grille and headlight assembly that has a more assertive appearance and houses the new Bi-LED projector headlights (which are much brighter than the previous model’s projector headlights), provide increased visibility for night driving.

One impressive feature, especially given that the MU-X is often used as a tow vehicle, is the fact that the new Bi-LED projector headlights are also equipped with an auto-levelling feature, which automatically adjust the headlight beam to the appropriate angle whenever the MU-X is loaded with a complete complement of passengers, heavy cargo and towing.

Complementing the fresh exterior look, is a stylish new design 18-inch alloy wheel with All-Terrain (AT) tyres for all LS-U and LS-T variants, with LS-M spec MU-X riding on new design 16-inch alloys with AT tyres. There are no 17 inch alloys anymore. 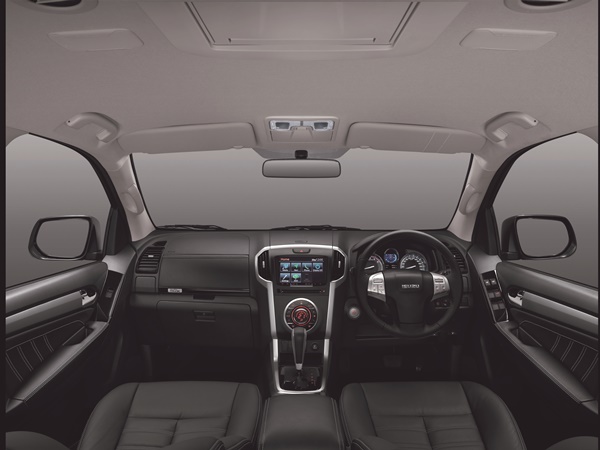 One area where the previous MU-X needed improved was internal styling. The interior was a little basic previously with hard plastic surfaces everywhere. The MU-X’s interior styling has been extensively refined, with the passenger cabin now featuring a dual-tone dashboard with some soft touch finishes, new chrome and piano-black trimming, and new soft touch armrests and console coverings providing a more refined ambience.

In addition, new quilted design leather-accented seats feature in LS-T variants. These seats are a vast improvement over the previous model that were a little hard and flat and left you with a numb bum after a full days driving.  Unfortunately, there is still no lumbar adjustment nor tilt feature for the seat squab. The long leg drivers will need to stretch for the steering wheel as there is no reach adjustment for the steering wheel. 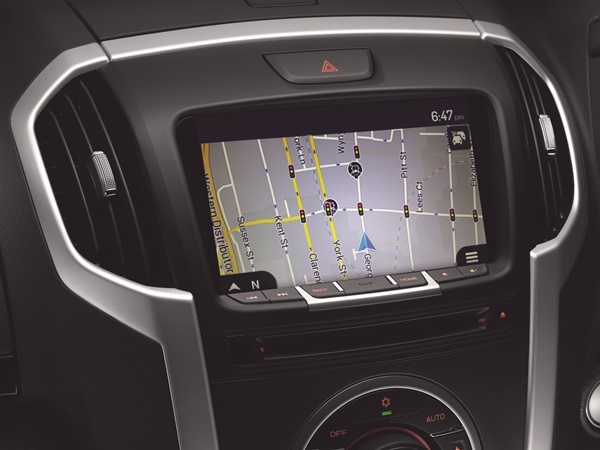 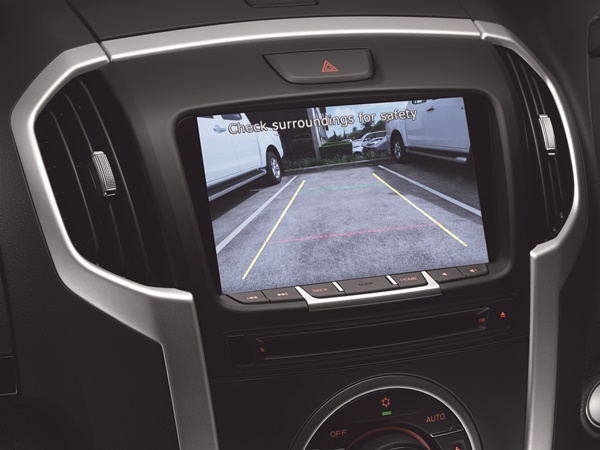 For those audiophiles amongst buyers, all 17MY MU-X cabins now house eight speakers delivering crisp, clear audio for all occupants: two roof mounted speakers in addition to the two front door mounted speakers, two dash mounted tweeters and two rear door mounted speakers. LS-T variants also boast a fold-down roof-mounted 10-inch DVD screen which can be easily viewed by both the second and third row occupants. The remote control unit allows both the DVD and audio functions to be conveniently controlled from anywhere in the vehicle.

For the plug in people there are three USB ports, two are located in the front dash and one in the rear, providing convenient charge points for mobile phones and other portable devices with USB charge ports. The covers are a little finicky to remove and if I owned the MU-X, I would probably just remove them altogether. For heavier-duty power requirements, there are three 12 Volt power outlets, located in the centre dash console, glove-box and rear cargo area.

Storage is another highlight with 12 cup holders and 18 storage solutions! I am so glad that Isuzu kept the clever slide out cup holders in front of the side air vents. Unfortunately Holden has removed them, which in my opinion is daft.  There are cup holders everywhere, plenty of good storage bins and no shortage of places to put things. It is really well laid out. 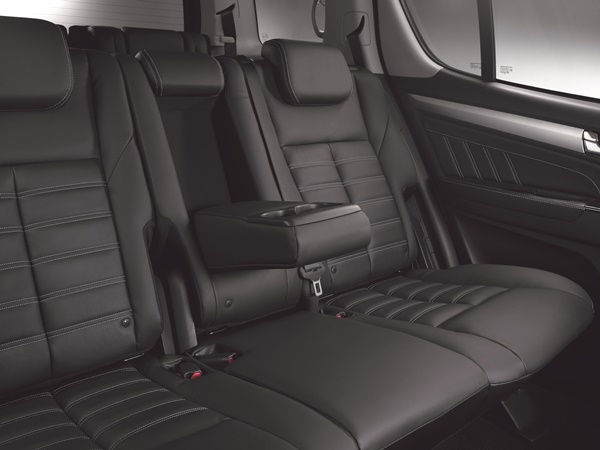 Front seat occupants are well catered for with comfortable seats and plenty of room. Middle row passengers have adequate leg, head and shoulder room, however if the front seats are all the way back the knee room is restricted. For access to the rear seats there is a clever folding-rolling second row seat arrangement that makes passenger access to the third row seating a breeze. 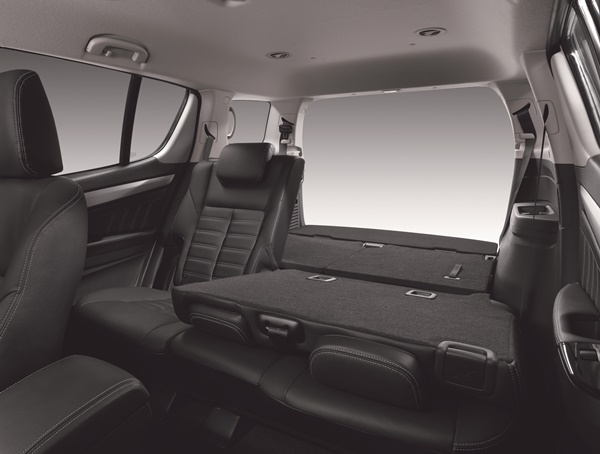 The third row seats are okay for taller passengers but more for children or early teens. I just can’t help the feeling that the third row of seats in all the Ute based wagons are an afterthought, although these do fold flat to provide a long and spacious storage area. The storage bin behind the seats just seems like it doesn’t fit. Isuzu aren’t alone in this. The Toyota Fortuner has those ridiculous fold up rear seats, the Mitsubishi Pajero Sport rear seats simply don’t work well and the Trailblazer and Everest all have issues.

One of the big features on the MY17 MU-X is the significant improvement in NVH (Noise, Vibration and Harshness) comfort levels that have been achieved. This, in large, is thanks to the addition of new sound and vibration insulation across the vehicle, including to the dash console, floor transmission tunnel, windscreen seal, firewall and floorplan. Road noise is noticeably quieter, less overall wind noise (although still a little around the rear view mirrors) and less noticeable engine rumble, although still enough to be pleasant if you like diesel rumble as I do. 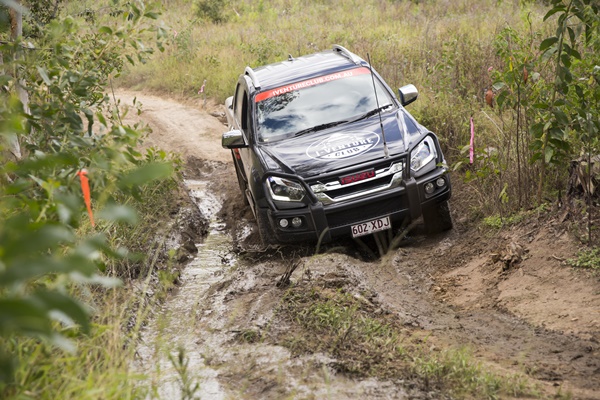 The other big news item is the improved engine capability. The new Euro 5 compliant engine was introduced when the revised D-Max was launched earlier this year. Although the Isuzu engine was rarely found lacking, it was lagging behind competitors.

We should be extremely thankful to the Isuzu staff here in Australia because they fought hard to retain the 3.0L engine and make the improvements needed. It will prove to be a very clever business decision I’m sure as we Aussies like our capacity in our engines. 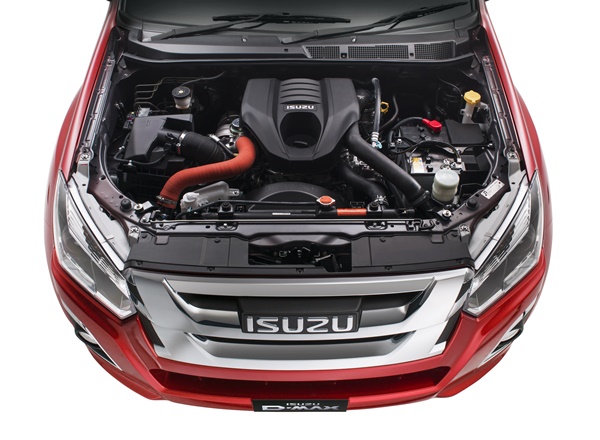 The new Euro5 emission compliant 3.0 litre 4JJ1-TC Hi-Power turbo-diesel power plant is a world first for Isuzu. It was developed exclusively for the Australian market after exhaustive local research and testing into the use and demands of existing Australian Isuzu owners, and no other market currently features an Isuzu 3.0 litre Euro5 compliant engine.

The key feature is that maximum torque output has been increased to 430Nm from the previous engine’s output of 380Nm to meet the demands of Australian operating conditions and customer’s expectations.

In comparison to the previous engine, 380Nm of torque (previous maximum) is now on tap from 1,700 – 3,500 rpm – which is 100 rpm lower and continues 700 rpm higher – meaning the same engine rpm provides more power and the same torque can be generated at lower engine rpm. 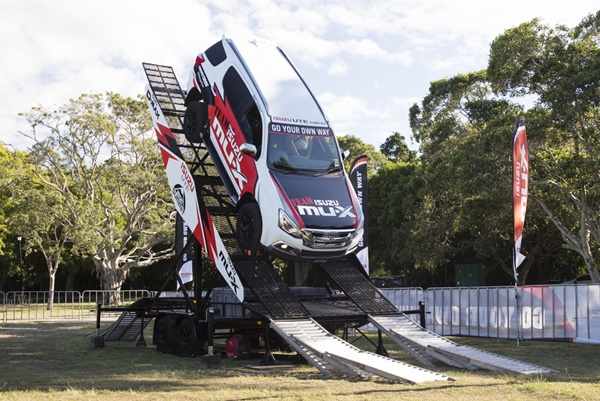 To cope with the increased torque Isuzu has introduced a new Aisin AWR6B45 6-Speed Automatic Transmission with “lock-up” torque converter. This ensures that drivers of the MU-X are provided the most efficient gear selection to suit a wide variety of driving conditions – further improving fuel efficiency and lowering CO2 emissions 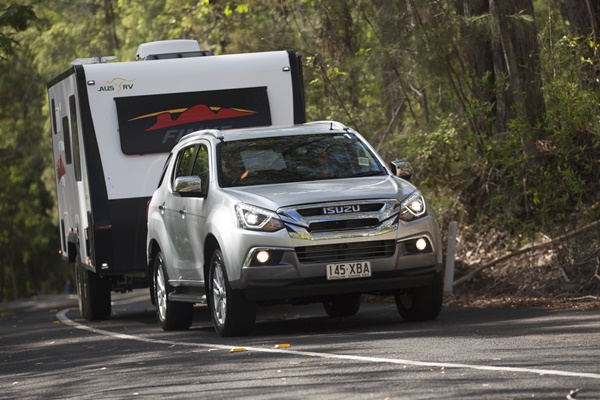 What all this means in real terms is that the Isuzu MU-X is now an even better 4WD and tow vehicle.

There are height adjustable head restraints for all occupants and dual pre-tensioners with load limiters for the front seatbelts, along with ISO-FIX child restraint points in the second row.

What the MU-X is lacking are some of the more recent additions to competitors like the Holden Trailblazer, with Blind Spot Indicators, Forward Collision Warning etc. 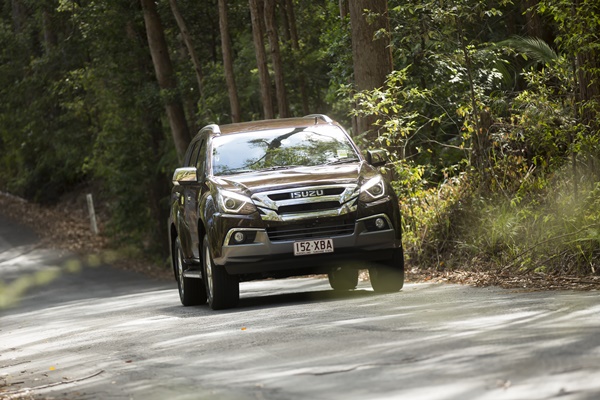 All 4×4 variants of the MU-X offer a reasonable level of ground clearance, for true off-road capability. For added protection, 4×4 models are also equipped with a 2mm steel front skid plate, steel sump and transfer case guards plus protection for the leading edge of the fuel tank when travelling off-road.

We tried this on the launch on two occasions, once descending the 45 degree ramp that was set up and another time on a fairly steep rugged trail descent. Both times the HDC performed effortlessly and without much noise or fuss.

There is however no real diff lock option that seems to be prevalent on the MU-X competitors.

So overall the MY 17 updates are a significant improvement over the outgoing model with more torque from the Euro 5 engine and a better delivery spread, better NVH comfort levels, redesigned interior, upgrades to the headlights, a new 6 speed AT and MT transmission and improvements to the audio and Sat Nav systems.

There are however some shortcomings that remain, especially as the market place expects more from its vehicles every year. Simple things like reach adjustable steering wheel, lumbar support, blind spot indicators and forward collision warning, rear diff lock, auto headlights and wipers, heated front seats etc. These are features that seem to be becoming standard on this class of vehicle now and hopefully can be introduced on the MU-X before too long.

If you are looking for a robust, honest, durable, reliable 4WD or tow vehicle you would find it hard to pass the MU-X over. The Isuzu MU-X remains a firm favourite here at OzRoamer, simply because of its capabilities and no fuss attitude to delivering a relaxed driving experience. 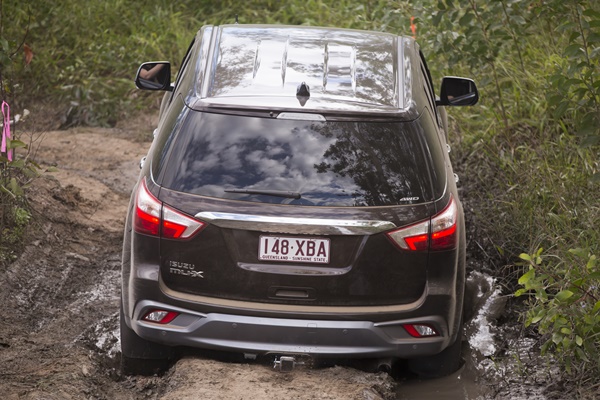 All Isuzu vehicles now come with the Isuzu Service Plus 555. This includes a 5 year warranty, 5 years Roadside Assistance and 5 year/50,000 kilometre Capped Price Servicing program – which adds further peace of mind when it comes to protecting your investment and your wallet.

The C-HR is designed for the tough streets of Surry Hills with weekend excursions to the Hunter Valley . While definitely not the target market it is fun to see what the two old guys think about the C-HR in the video. […]

We got up a tad earlier than the day before being a Saturday morning to ensure we got ourselves a car spot as Thredbo on a weekend is very busy and more often than not the carpark fills up by 9am! […]