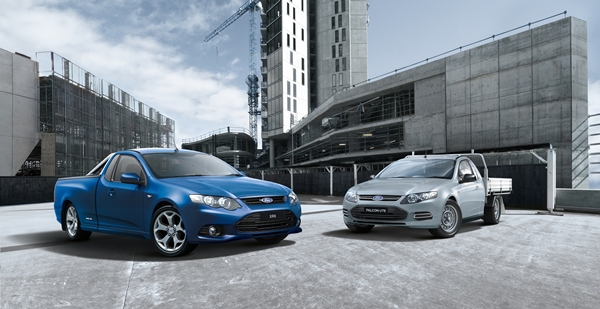 Luxury performance buyers now have an even bigger reason to put the 2014 Falcon G6E Turbo and performance XR Series sedans on their shopping lists.

Ford has announced across-the-range price realignments for the 2014 Falcon range, with the luxury performance G6E Turbo receiving a $9,685 cut to its Manufacturers’ List Price (MLP). The 2014 G6E Turbo will have an MLP of $46,550*, when it goes on sale later this year.

Performance buyers for both the six-speed manual and six-speed automatic XR Series also benefit from the price realignment, with MLP reductions of between $3,045 and $4,400 for normally aspirated XR and XR Turbo models.

The reductions don’t stop at the Falcon G6E Turbo and XR Series either, with customer savings spread across the entire Falcon range. Depending on the model, MLPs have been trimmed between $1,335 and $6,625, while equipment levels and features have been improved.

Apart from the proven in-line six cylinder petrol and EcoLPi engines, Ford’s acclaimed EcoBoost engine technology is a no-cost option on the Falcon and Falcon G6E sedan, mated to a six-speed ZF sequential gearbox. EcoBoost offers the power customers want with the fuel efficiency they desire.

The EcoLPi engine is available on Falcon sedan, Falcon XR6 sedan, adds $2,500 over the normally aspirated 4.0-litre petrol engine, while the six-speed ZF sequential automatic in the sporty XR6 and XR6 Turbo adds $2,200. Pricing for the 2014 Falcon XR8 sedan will be revealed early next month.

“We have had an overwhelmingly positive response to the styling and technology of the 2014 Falcon. Now we bring a very compelling price for customers looking for a large sedan, particularly the G6E Turbo and our XR Series,” Ford General Marketing Manager, David Katic said.

“Falcon is also the only Australian made large sedan that gives customers the choice of EcoBoost technology, six-cylinder performance or V8 sportiness. No other local carmaker can make that claim.” As well, customers are able to choose between EcoLPi and turbo variants, he said.

“This is the best-ever Falcon, introducing new smart technologies like SYNC2 with Emergency Assistance across the range,” Katic said.

Importantly too, the 2014 Falcon range will come with myFord Capped Price Servicing as standard for the entire Falcon range, which also includes the addition of auto club membership and roadside assistance.

Customers can check out in full myFord Capped Price Servicing terms and conditions at www.ford.com.au/myfordcps

• New graphics across all series

*This is the Manufacturer’s List Price for the vehicle only.  A number of other components, including a  dealer delivery fee, stamp duty, registration, compulsory third party insurance  and other statutory charges may be payable by a customer in relation to the  purchase of this vehicle.  The final  transaction price will be as negotiated by the customer with their chosen  Dealer. ** MLP includes Single Zone Climate control as  standard (option price on FG MKII $2,000) ^Recommended  Manufacturer’s List Prices only. Prices shown include GST. The actual selling  price for options and accessories (fitted or unfitted) is at the dealers’  discretion.

About Rob Fraser 1034 Articles
Rob Fraser – General dogsbody & Director Rob is the founder of the business. He constantly mutters something about way too many red wines one evening being to blame. He first learned to drive on the farm in a left hand drive WW11 Jeep when he was 11, many years ago. He has maintained a strong interest in the industry ever since and was hooked on 4WDriving way back then. Having previously lived at the top of corporate life he retired in 2000 and hasn’t put a suit and tie on since. Cars are his passion so why not have a business doing what you love he figures. He has towed either a caravan or camper trailer to most parts of Australia, has run guided tours for camper trailers’ and instructed drivers in off road towing Often known for taking the 4WD in the driveway over the sports car, he has travelled pretty much everywhere in Australia and when he is bored goes for a drive.

Isuzu updates the D-MAX range for 2022

Isuzu’s updated 2022 Isuzu D-MAX 1-tonne Ute range has officially arrived, welcoming a host of updates and refinements based on feedback over the past year. […]

With the continuing popularity of Dual Cab 4WD Utes, especially top spec models like the Isuzu X Terrain and Toyota HiLux Rugged X the humble origins of the Ute can be often overlooked. […]

Isuzu UTE Australia (IUA) is set to strengthen the Isuzu D-MAX 1-tonne Ute portfolio with new variants, a new engine option and customer-driven upgrades for the upcoming 2022 (22MY) range. […]