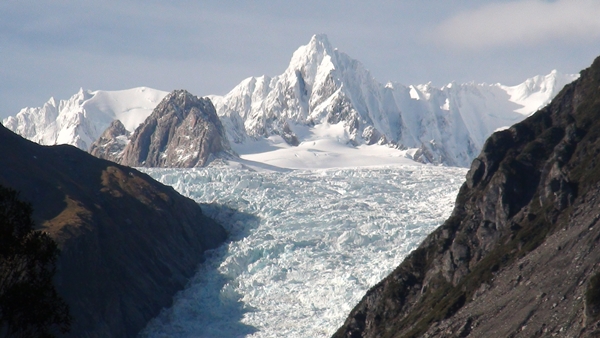 After a relaxing couple of days in Franz Josef we headed south towards Queenstown. The first stop was to be Fox Glacier about 30km down the road.

Let me start off by saying that I wasn’t expecting the drive we had. It was full of windy road that meandered alongside mountains and crossed numerous rivers. The drive was exhilarating and all the time I was thinking that I am going to come back and repeat the drive in something sportier like an 86 or Lexus ISF. It was just plain fun!! 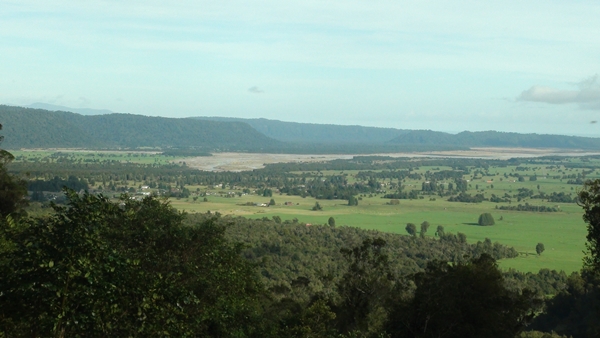 Then as the mountains passed you find yourself descending into a picturesque valley of farmland that houses the quaint township of Fox Glacier. We didn’t stop as we were on a time frame but it had the same charm and appeal as Franz Josef and an abundance of accommodation to chose from. 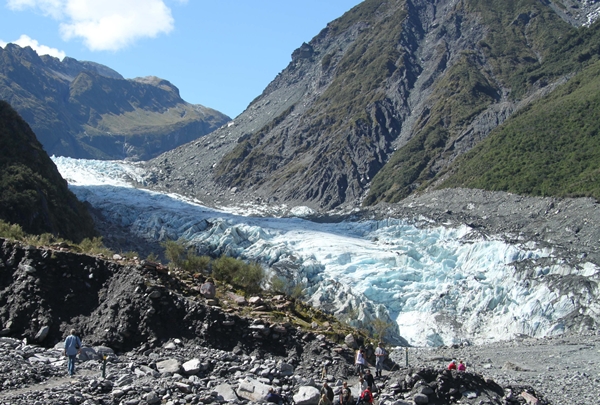 Just south of the township is the turnoff to the access point for Fox Glacier. Like its northern cousin it has been ravaged by time and has retreated a long way up the hill. On the road in there is a sign some 4-5 kilometres from the face that shows where the glacier was a couple of hundred years ago. Like Franz Josef it is melting at an alarmingly increasing rate. 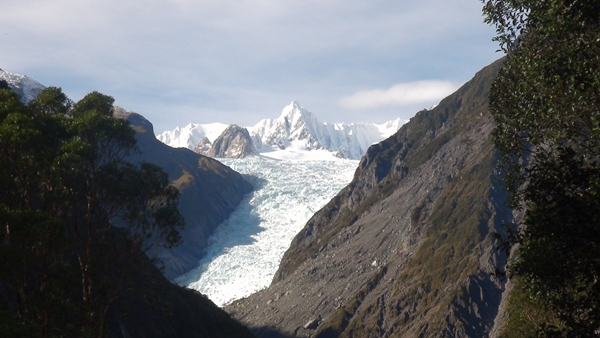 The walk to the face (about 500m short) is easy and rewarding. Fox Glacier is bigger than Franz Josef and magnificent in its own right. When you are back out on the main road just over the bridge is a turnoff to a viewing platform. 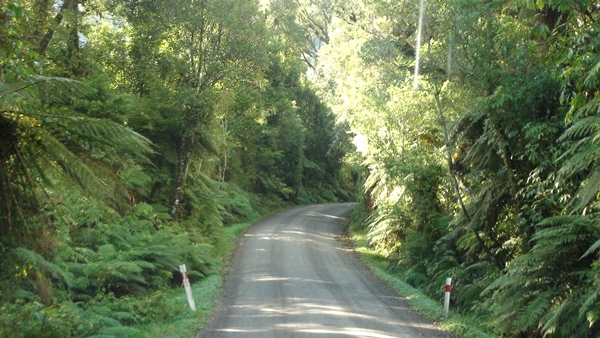 This allows you to see the glacier from a different angle, but beware the platform isn’t what you expect and you may miss it.

Heading south again we continued the trend of crossing a river every five minutes and alternating between unbelievably beautiful mountainous stretches and periodically popping out beside the ocean. Further south is Lake Paringa that like it northern cousins is peaceful, large and provided mirror images in the right settings. We stopped for lunch and while the setting was great the mood was spoilt by hundreds of little flying insects the size of a mosquito that swarmed and got into the car. It took us a couple of hours to get rid of the little pests.

Further south is the township of Haast. This is basically the last bastion of civilisation on the north west coast (there is a little outpost of Jackson Bay about 48km along a beachfront road south). There isn’t anything further south other than mountains and rivers. As you would expect when you leave Haast you head inland and the mountains are now on your right. It is here that you need to cross back over the Southern Alps through Haast Pass. 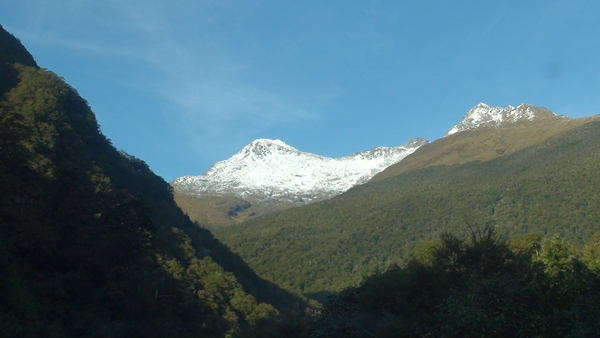 It is named for Julius von Haast, a 19th-century explorer who was also geologist for the Provincial government of Canterbury. It is one of the three passes where a road crosses over the Southern Alps, the other two being Lewis Pass and Arthur’s Pass, although the Homer Tunnel also passes under the Main Divide. The road through Haast Pass (State Highway 6) was converted from a rough track to a formed road in 1966 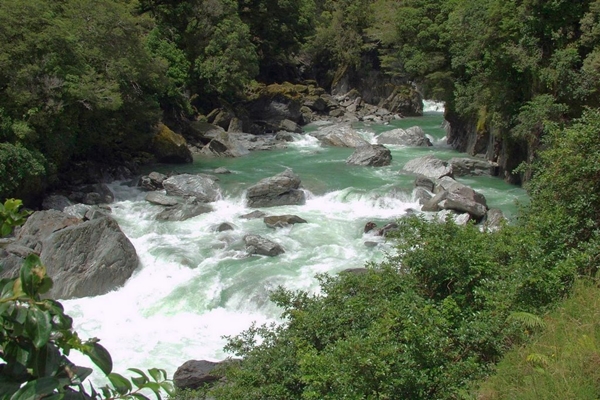 The Haast Pass rises to a height of 562 metres above sea level at the saddle between the valleys of the Haast and Makarora Rivers. As such, it is the lowest of the passes traversing the Southern Alps. The Haast Pass road is devoid of any settlements between Haast and Makarora. The road passes through predominantly unmodified beech forest and follows the river for kilometres. To try to describe the beauty would be doing it an injustice. Also it is impossible to capture the magnitude of the scenery on film. It is one of those moment that you need to take a pile of mind pictures.

The landscape on the north west coast up till now has been dominated by almost perfectly flat plains with mountains rising vertically behind them. Incredibly fertile with a huge rainfall and a river every five minutes. Stunning to say the least.

Once you traverse Haast Pass and onto Makarora the landscape changes. It converts to more rolling hills and more grazing and agricultural land. It is the more familiar landscape and less like a lost island. Still beautiful just very different. 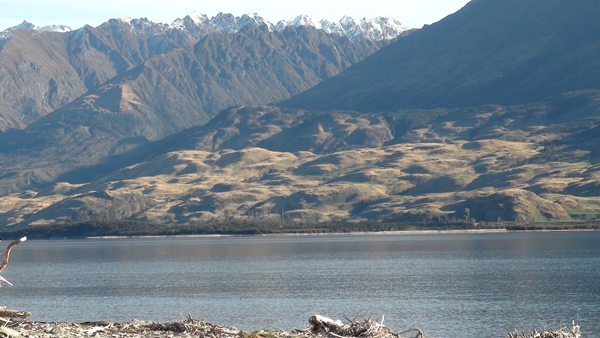 But this is New Zealand’s South Island and just around the corner is another view that just takes your breath away. I am talking about Lake Wanaka just south of Makarora. Lake Wanaka is at an altitude of 300 metres and covers an area of 192 km². It is huge and at 42km long keeps you entranced as the road hugs the shoreline. It is New Zealand’s fourth largest lake, and estimated to be more than 300m deep.

Again, just as your neck is becoming a little sore from looking right you crest a hill and to the left is another lake almost as big and long but just as beautiful. Lake Hāwea is located alongside Lake Wanaka at an altitude of 348 metres. It covers an area of some 141 km² and is, at its deepest, 392 metres deep and 35km long. 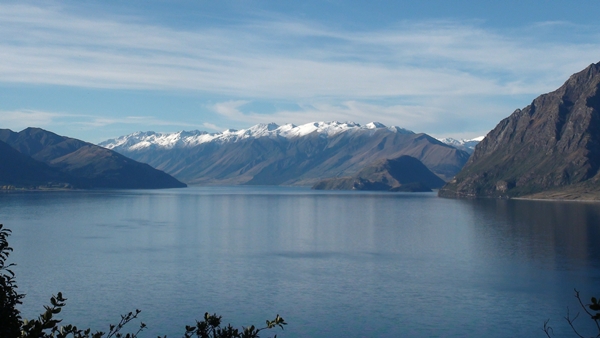 The water in both these lakes is fresh (very fresh) and crystal clear and again as someone coming from a dry continent such as Australia we just don’t experience anything like these lakes that are so accessible. We have manmade dams such as Warragamba and the Ord River but these in New Zealand are natural formations and seem to appear everywhere. Water is obviously not a problem anywhere on the south island.

Heading further south you again pick up Lake Wanaka near the township that bears the same name. From here the drive is a casual stroll towards Queenstown with a few more mountain drives following a river. One such passage is the world famous AJ Hackett bungee jump, where if you are of a mind to do so you can jump of a bridge and plummet towards a raging river below. This is where all the madness started years ago and is still recognised as a must for enthusiasts (not me however).

We arrived at Queenstown at our accommodation, BreakFree The Point, which are self contained apartments. These apartments are tucked into the hillside between the road and Lake Wakatipu. Every apartment has uninterrupted stunning views over the lake towards the Remarkable ski fields. This view would rival anything anywhere in the world as far as lake views go.

The apartments are a little older but very neat, clean and represent excellent value for couples or families alike. As you would expect the driveway is steep in places because it is literally built on the side of a hill. If you have a campervan or motorhome, its best to leave it up top as you may not get it back up if you drive it down, or worse may tip it over. You quickly get used to it though.

The two bedroom apartment is spacious with a queen bed and two separate single beds. The bathroom doubles as a laundry with a washing machine and dryer and the apartment has a well equipped and large kitchen. Like I said, ideal for families. They are a few kilometres north of town but it is an easy walk or drive into town and it is worth it for the value and view you get.

One gripe I have though is the internet. It is provided by Surf Spot NZ and after paying $45 for a week’s access we found that it simply refused to connect, when it did it performed at about dial up speed and for no reason it would just disconnect and refuse to connect again. The problem was a faulty router that was fixed however it still wasn’t like at home or work.

Once we settled in we headed to town to Winnies Pizza bar. This was recommended by Chloe who has frequented there before. The food is fantastic and value for money. So much in fact that I overindulged and paid for it later.

So how would I rate our drive from Franz Josef to Queenstown. As a driving enthusiast that would happily spend my entire life cruising the countryside (anywhere) in a car it was one of the top five pleasant experiences I have had to date. It was simply awesome to see the diversity of scenery, the engaging roads and experience so much of the difference of what makes the South Island of New Zealand so special all in one day. The Toyota Prado again proved just what an awesome family tourer it is with surefooted driving across all scenarios and economical to boot. How can we top that tomorrow?

May 14, 2014 Rob Fraser Activities & Things to Do, Places to Go and Stay, Travel Articles, Uncategorized 0

We left Queenstown relatively early as we wanted to stop along the way to Omarama. The scenery isn’t like the Alpine mountains we have experienced so far but nevertheless was spectacular, especially through Lindis Pass. […]

2014 NZ Trip Things to do in Queenstown

May 13, 2014 Rob Fraser Activities & Things to Do, Travel Articles, Uncategorized 0

Our stay in Queenstown is coming to an end unfortunately. Over the few days we have packed heaps in, including some of the main attractions. Here are a few of them for the not so action adrenalin seekers amongst us. […]