More than any other segment the family SUV’s have grown market share. Replacing normal station wagons, people movers and even 4WDs, these, usually seven seat, AWD SUVs are a phenomenon.

Extremely popular and available across a wide price range, it’s confusing for buyers. Especially when you move up through the model ranges that add more comfort and often more safety features. The reason for the wide price range is that many models have entry models that are relatively inexpensive and go through to the more pricey models.

Definitely on road focused, although you could include some true 4WDs as well, but most of these vehicles may see an annual trip to the snow or the occasional dirt road to a favourite picnic spot and that’s about the extent of the adventure side. Many are even offered in 2WD variants as well.

The Nissan Pathfinder, which would normally be included is in limbo, with the old model sold out and the new model not arriving yet.

The final nominees’ showcases just how much this category has moved in recent times as some models that normally would be a definite starter for the final list missed out simply because there are others that have stolen their place.

More than any other category this one was the most difficult to narrow down to three finalists and we were tempted to extend it to five, but decided against that. 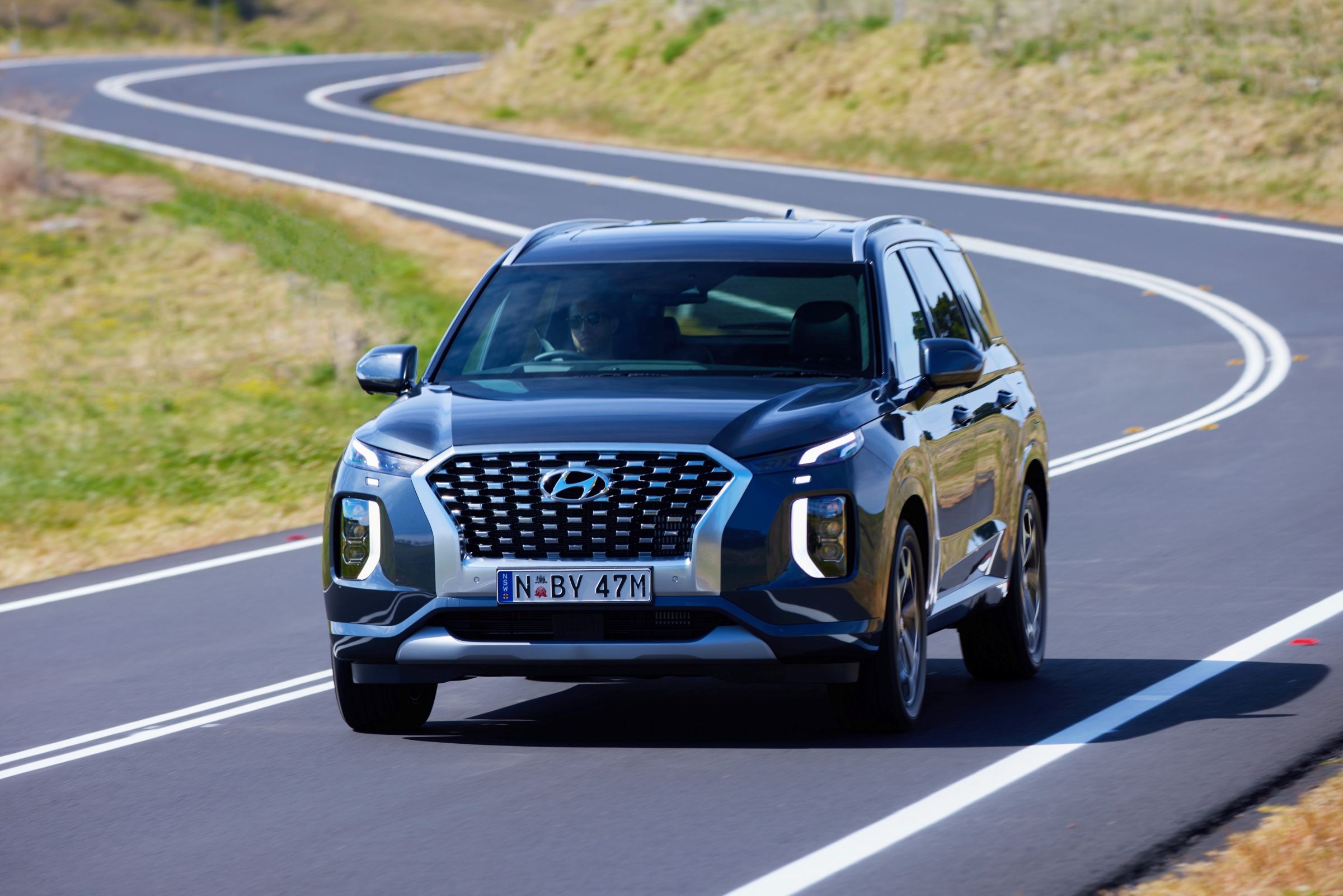 Palisade is a big, comfortable and luxurious SUV for the family

There is the Palisade, Palisade Elite and Palisade Highlander. The engines are a petrol and diesel choice and either 2WD or AWD. Only the diesel version comes in AWD. More details later.

You can get either a seven seat or eight seat option as well.

Pricing for the AWD versions is 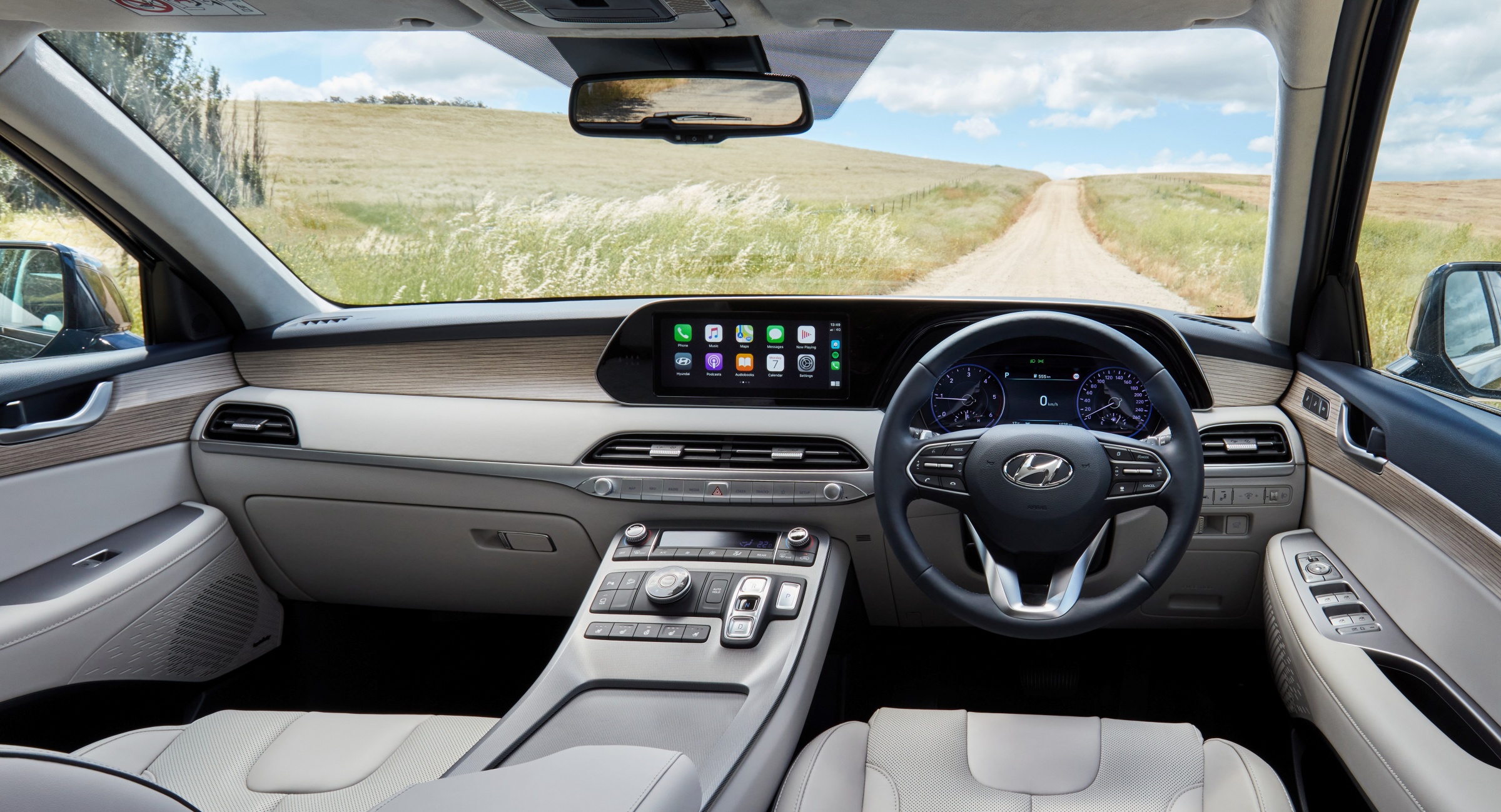 The familial styling is obvious, but looks more integrated than the Santa Fe.

Designed primarily for the Australian market with its big bold grill, compact Halogen headlights and LED DRL’s, as well as silver highlights. The profile is surprisingly sleek, with sculptured accents along the door sills. The rear is upright, which adds to the load capacity and practicality. Vertical LED tail lights add to the styling along with the LED High Mount Stop Light (HMSL)

Inside its spacious. Hyundai have done a great job with the ambience. Even the base model feels luxurious. There is acres of room.

The driver’s seat is very comfortable with multiple adjustments and you simply ease into the drive mode. Driver’s instruments are large and easy to use.

One feature is the camera that appears in the dials when you turn on an indicator. It’s clever and functional. It’s also found throughout many of the Kia/Hyundai models.

The integrated central screen houses the usual functions. The central transmission lever is a push button system and it works a treat. Next to that is the drive mode select. A huge central storage bin provides a perfect arm rest.

There is heaps of room for the front occupants, loads of room for the middle row seats, especially if you take the two seat option and the third row are best in class. Boot space is cavernous.

As you would expect it is packed with all the safety, comfort and luxury features that Hyundai can fit in there. Everyone can sit back, relax and enjoy the drive. 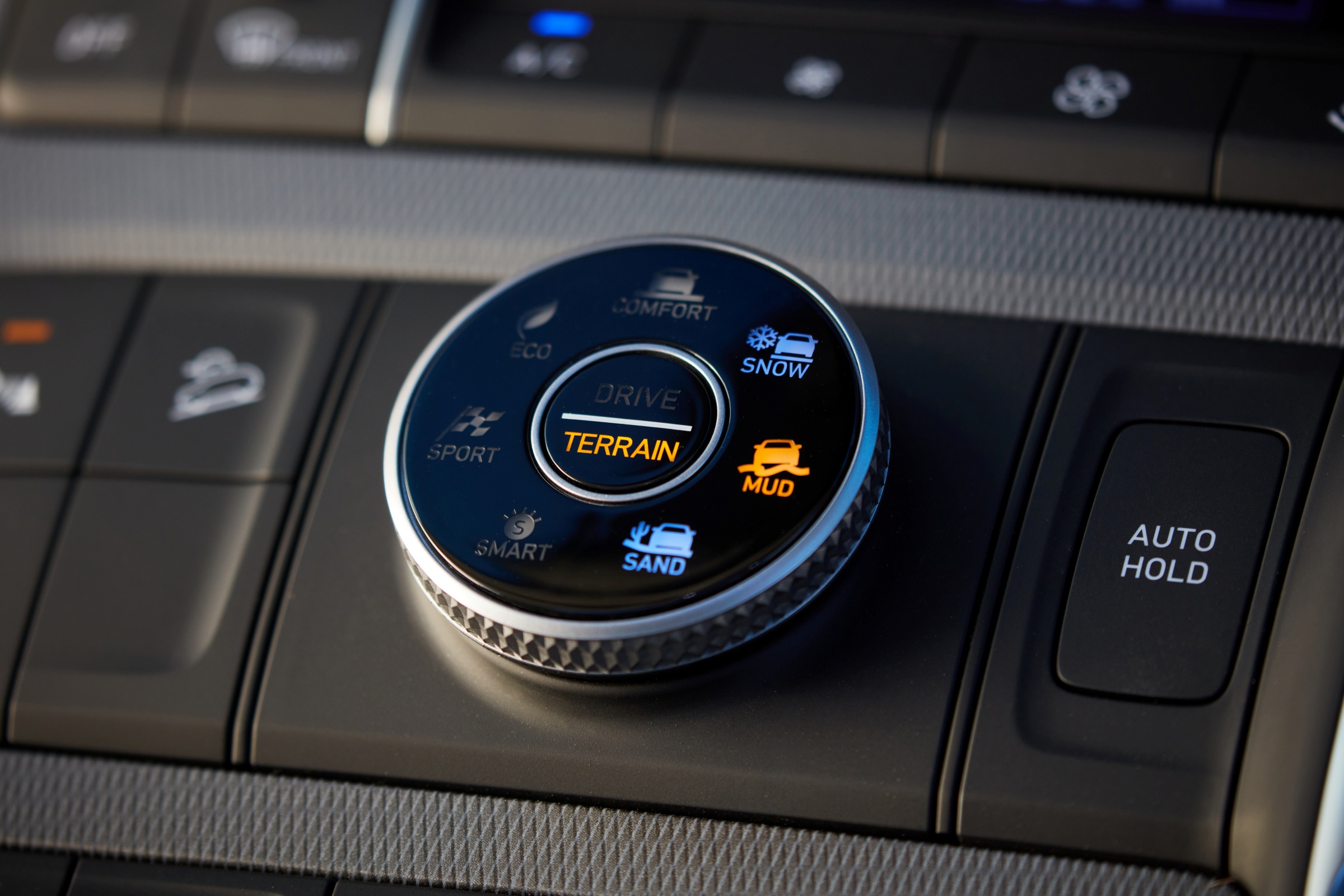 Palisade is powered by a 2.2L diesel engine that produces 147kW and 440Nm driving through a smooth 8 speed sports AT and AWD. 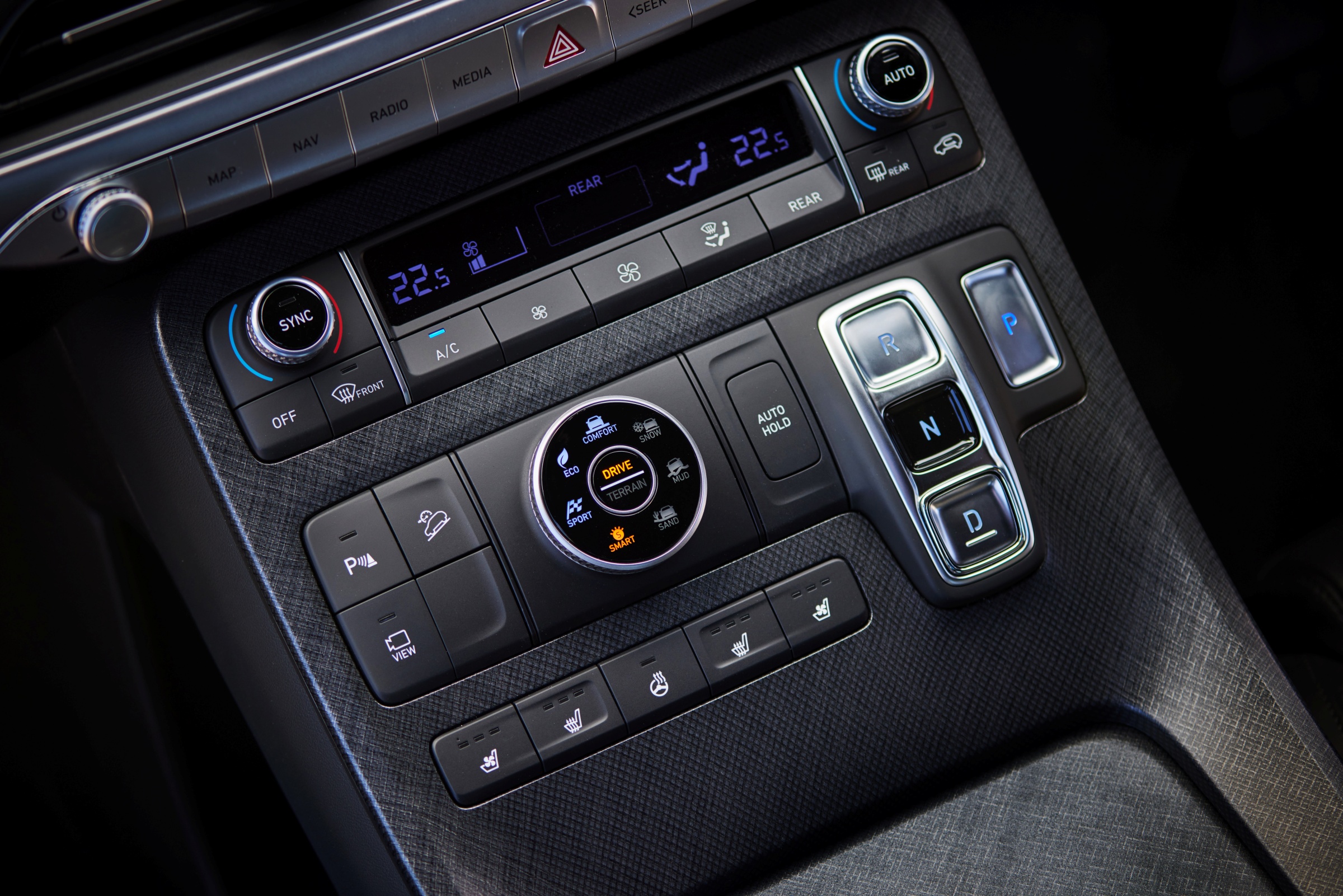 What is a pleasant surprise is the driving dynamics.

It drives like a smaller SUV with a level of dynamics and quietness that would sit comfortably on many a European SUV.

The ride is compliant, handling is good for a family wagon and you can easily drive for hours feeling quite relaxed. 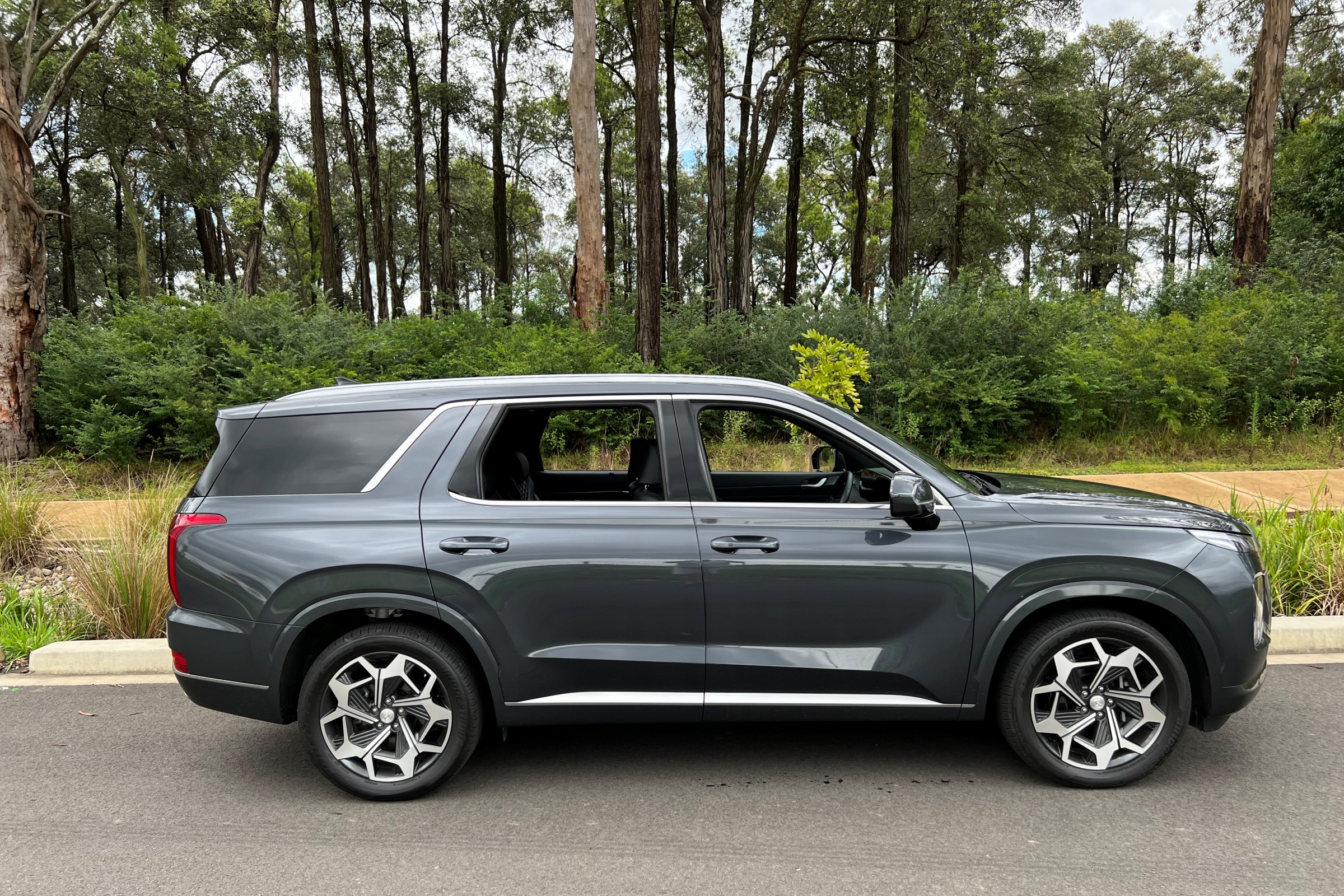 Palisade is a surprise.

Yes it’s big, but it doesn’t feel like it at any stage.

Its combination of on road dynamics, quietness and steering responsiveness belies its size. All in all it’s a pleasant driving experience.

As a family SUV its sits between segments almost in a class of its own due to its size. Palisade will comfortably fit the family and luggage for that holiday or trip to the snow,

If you want the most luxury take the 7 seat Highlander 2.2l. It’s the one I would buy if i was looking. 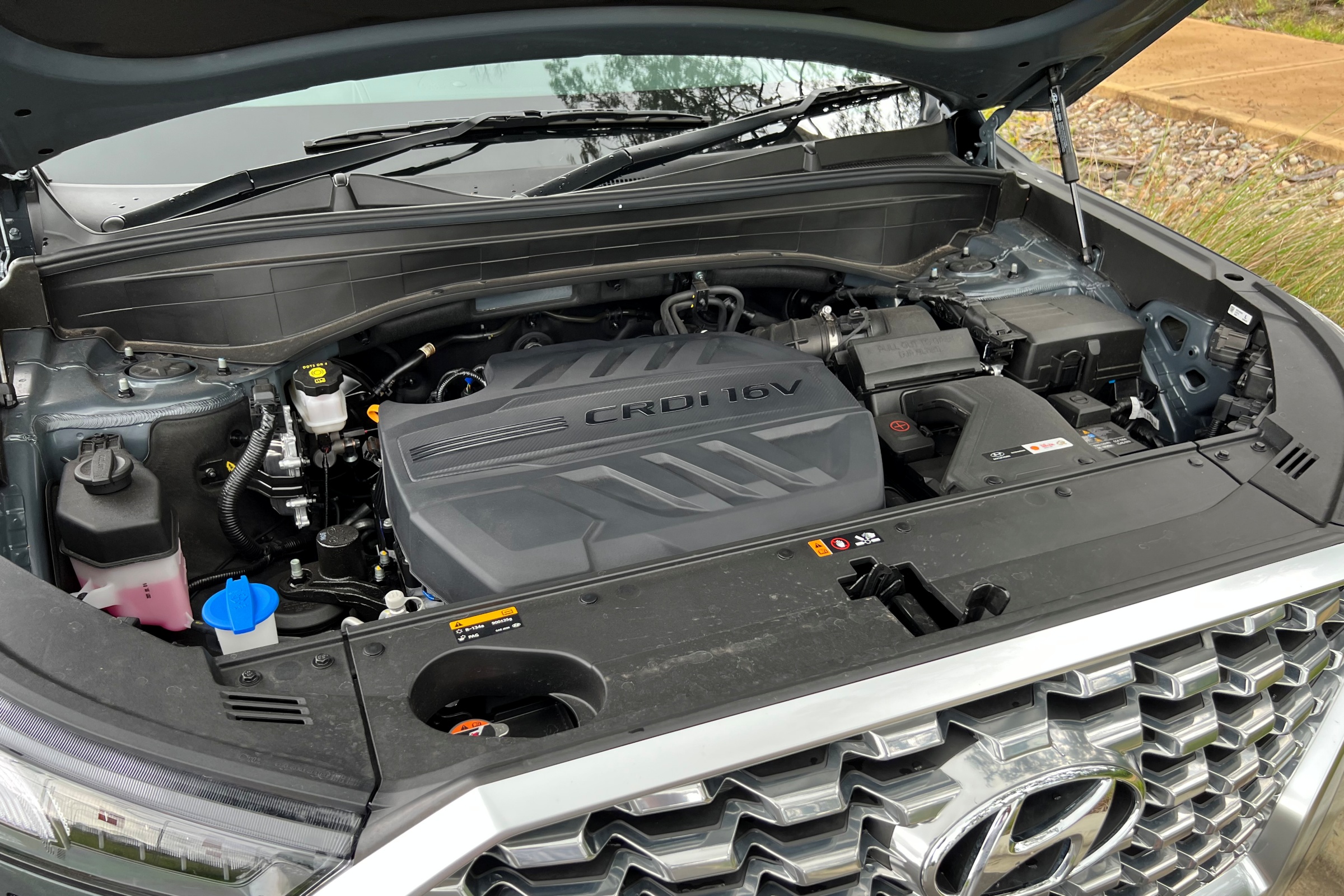 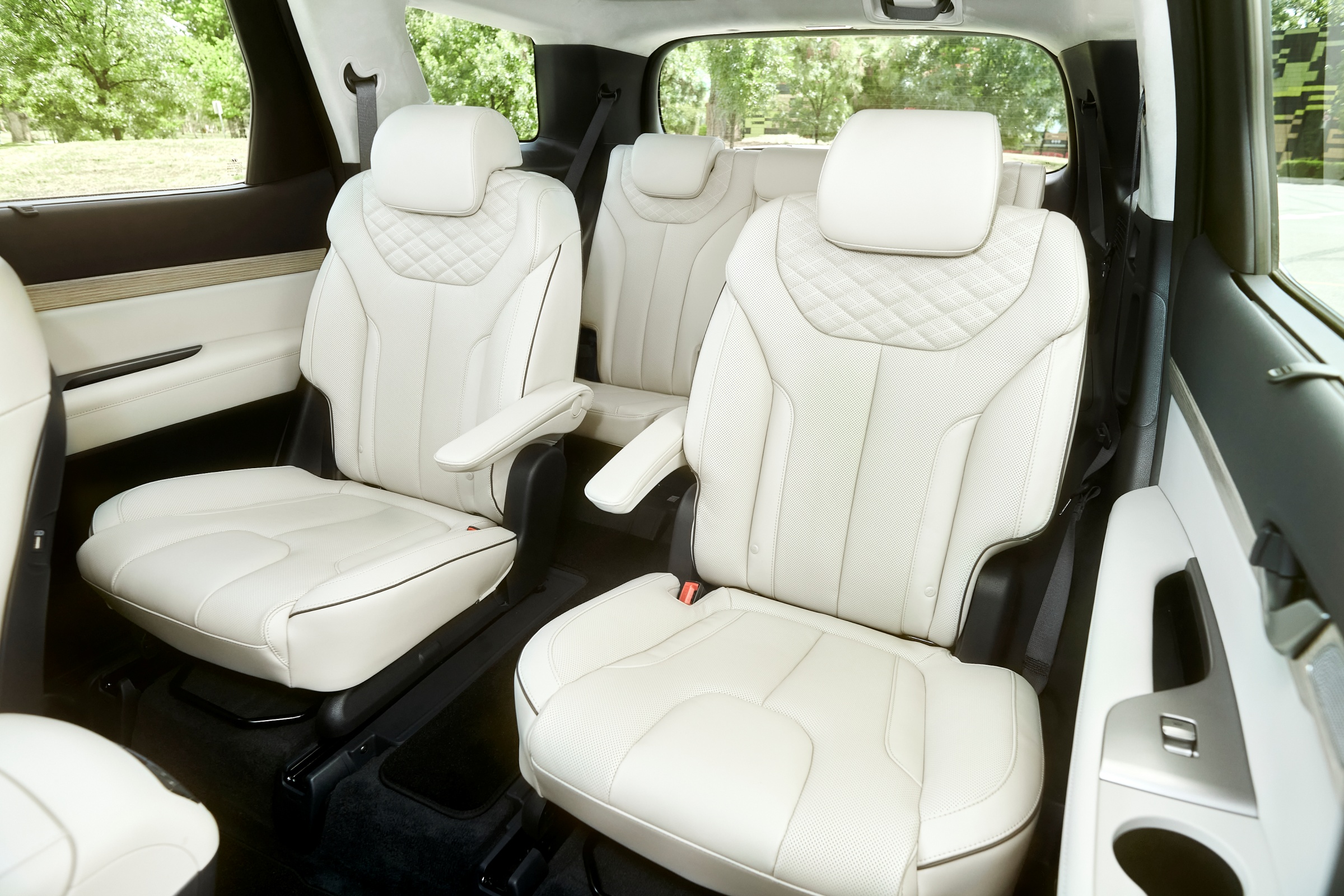 *Towing and AWD Capability is compared to other similar vehicles in the same class. 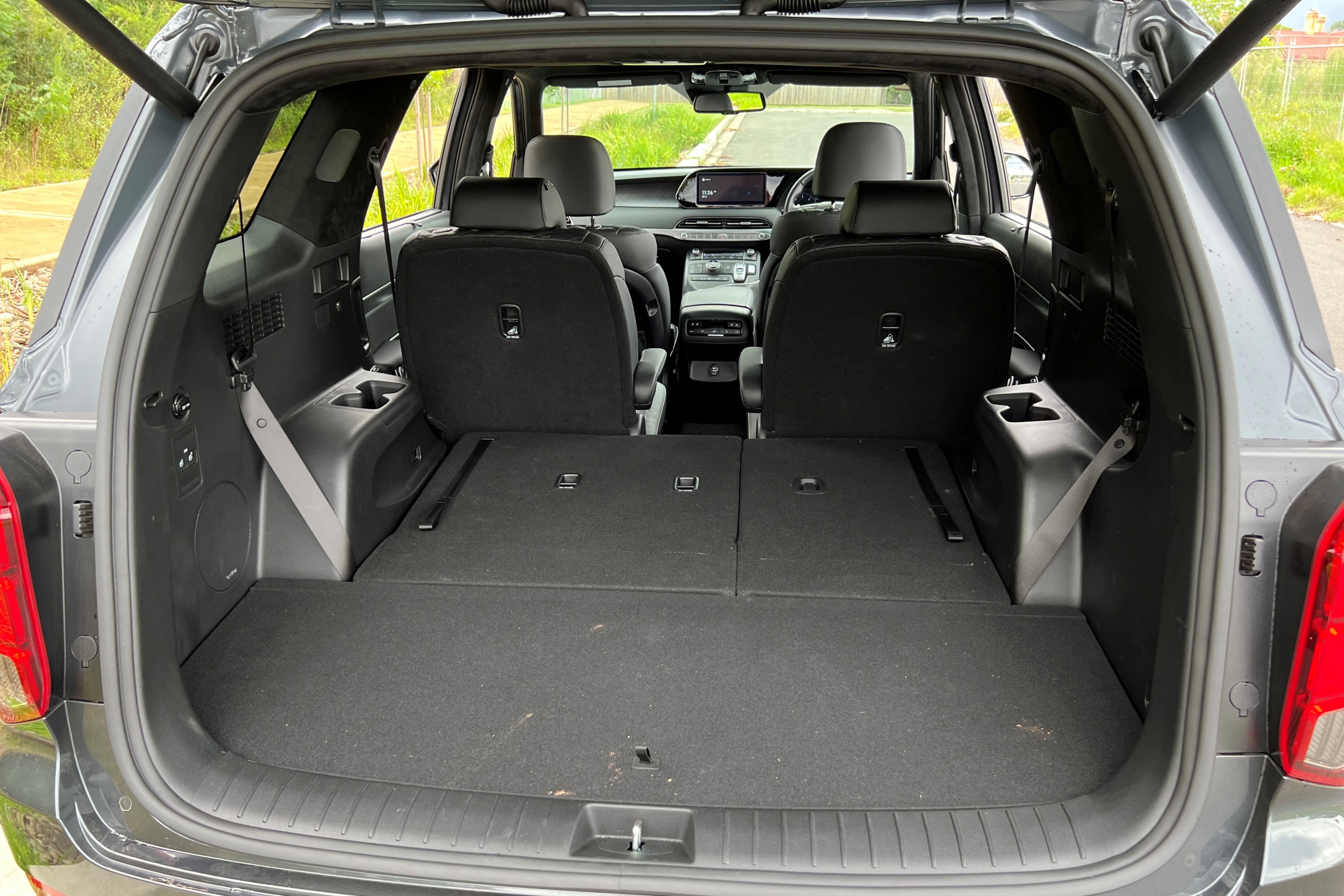 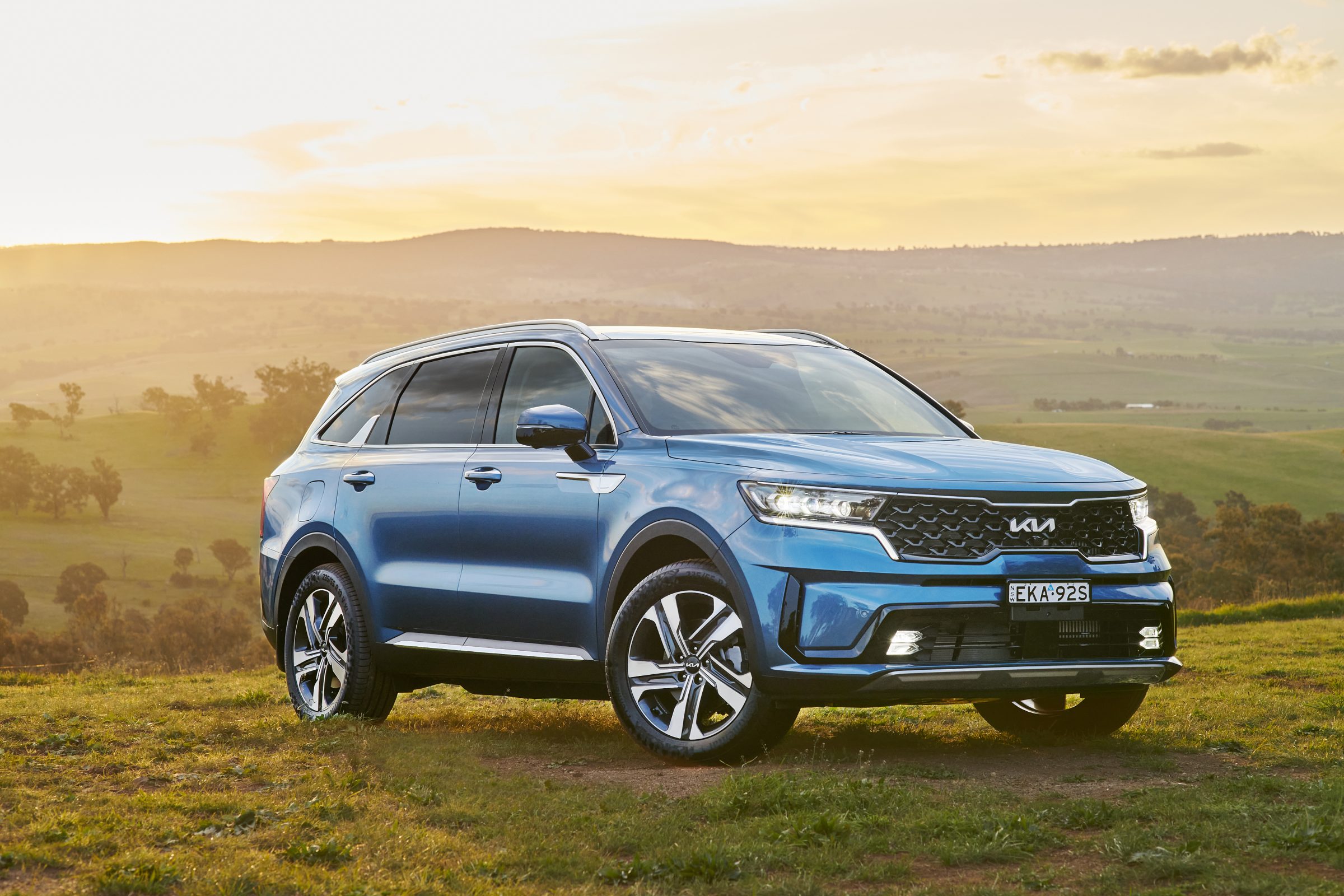 Kia released their fourth generation Sorento late in 2020 and it takes it to new levels. Kia Sorento has been at the top of its segment ever since it was first released in 2003.

In fact it has been a multiple winner of this category previously, only being knocked off by the Palisade this year.

They come with an Active AWD (Part-time with lock mode), Torque distribution display as well as an 8 speed DCT. PHEV comes with a six speed Sports AT.

Based on the luxurious GT Line the PHEV is the first electrified model in the Sorento line-up with its powertrain combining a turbocharged petrol engine with a battery pack and electric motor?

Sorento PHEV has a relatively modest 1.6-litre turbocharged engine added to which is a transmission mounted electric motor with a total of power of 195kW and 350Nm of torque.

The efficiency of this PHEV vehicle is that it can, with a full charge, travel 68 kilometres on battery power alone which suits many urban based vehicles. On long trips you can rely on the petrol engine alone.

The Sorento is a well-proportioned, stylish SUV that has continued to get better every model update.

The interior is very comfortable with leather seats, (GT LINE) well laid out driver instruments and central screen, plenty of storage and electronic adjustment for the driver’s seat.

Rear seats are spacious for passengers and the two fold up seats will take early teens for short trips.

The latest Sorento models offer enhanced all-terrain capability thanks to a new Terrain Mode where drivers can choose from ‘Mud’, ‘Snow’ and ‘Sand’ modes.

A large touchscreen controller resides in the middle of the flat dash that links with the digital instrument pod in front of the driver. This is where lane change view is projected when you turn on Sorento’s indicators.

Gear selection is via a larger rotary dial in front of that on the centre console.

Kia Sorento continues to deliver a quality family SUV that matches many European SUV s without the badge. 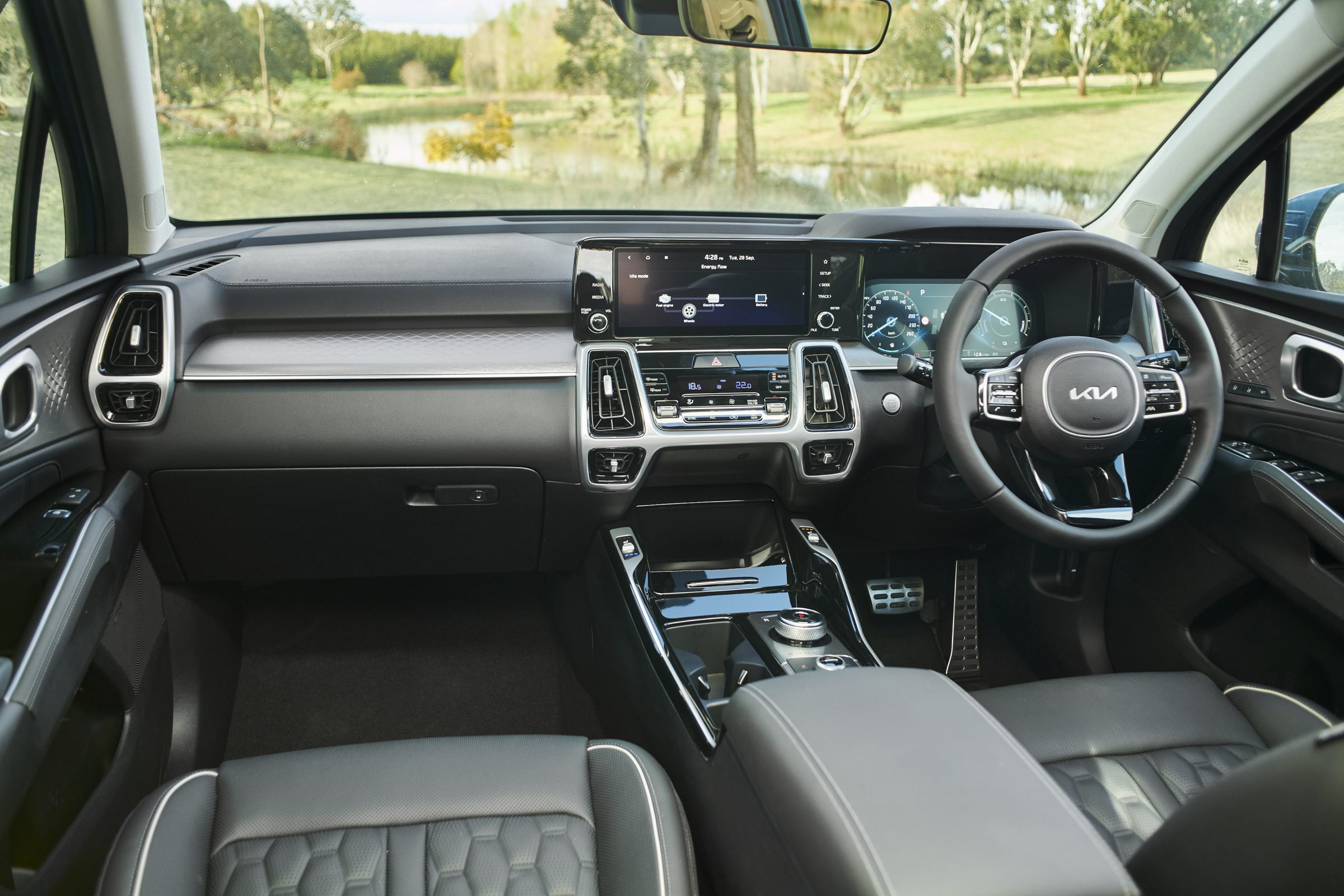 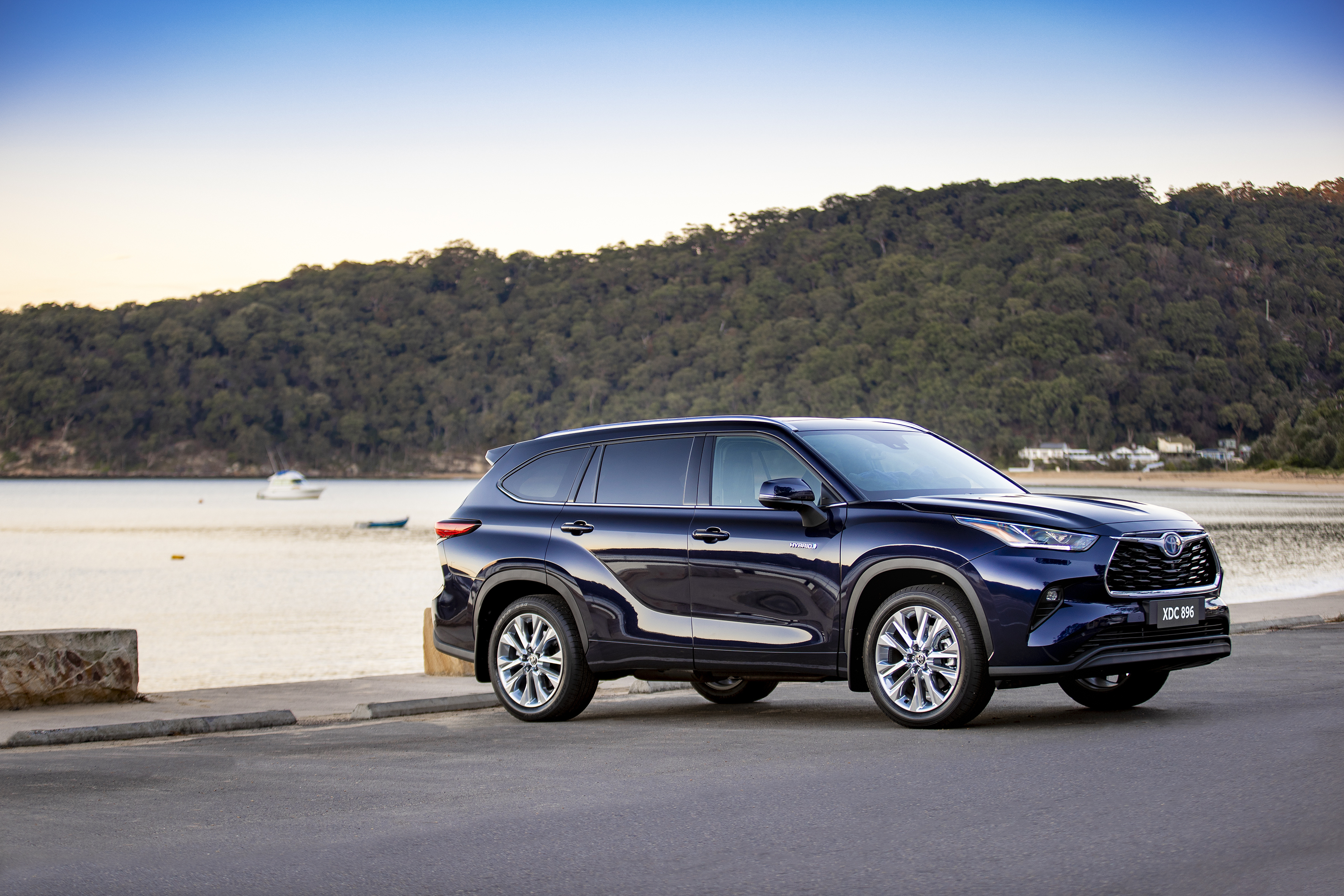 Toyota has launched an all-new Kluger late in 2021 – it is the fourth generation of this seven-seater.

Toyota’s two other models in this category, the bestselling Prado and the Fortuner are known for their off-road capabilities but the Kluger is clearly aimed as a comfortable vehicle for the family. It’s like Toyota could read a mums mind about what they wanted in their car.

The all-new model is available in three trim levels – GX, GXL and Grande – in petrol 2WD guise or hybrid or petrol AWD configuration.

The petrol electric hybrid solves a problem that has always been an issue with the Kluger, the fuel consumption.

More details can be found HERE

Kluger has long been a favourite of families for its stylish design and absolutely cavernous interior. 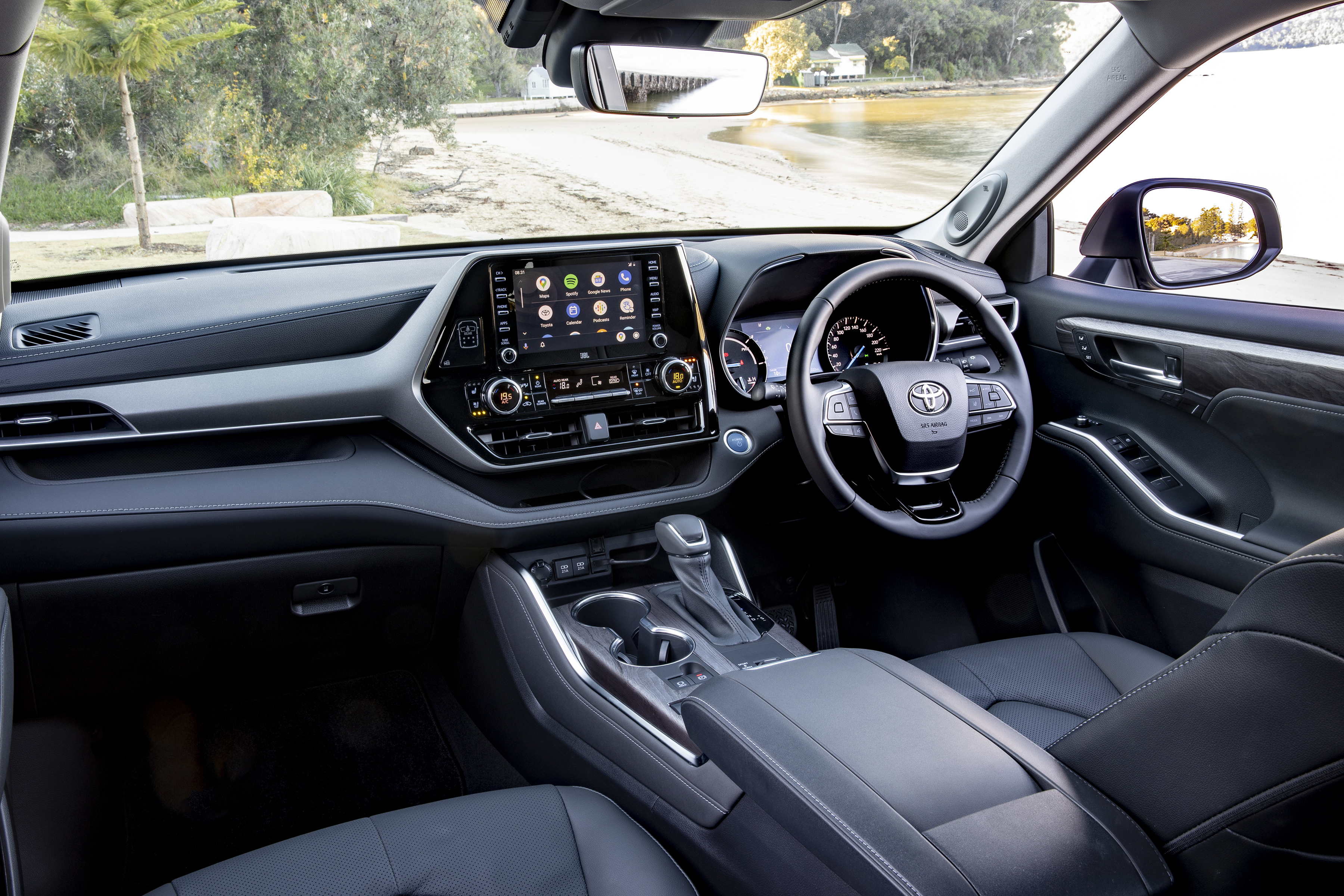 In summary the Land Rover Discovery Sport achieves a balance of on- and off-road capabilities that is not matched by other competitors. It has character, practicality and ease of driving. […]