Range Rover. Two words that Evoque images of landed gentry in tweed jackets heading to their weekend estate, or to the ski fields with roof racks full of skis and snow boards. Even transporting the Queen or the Pope at times. 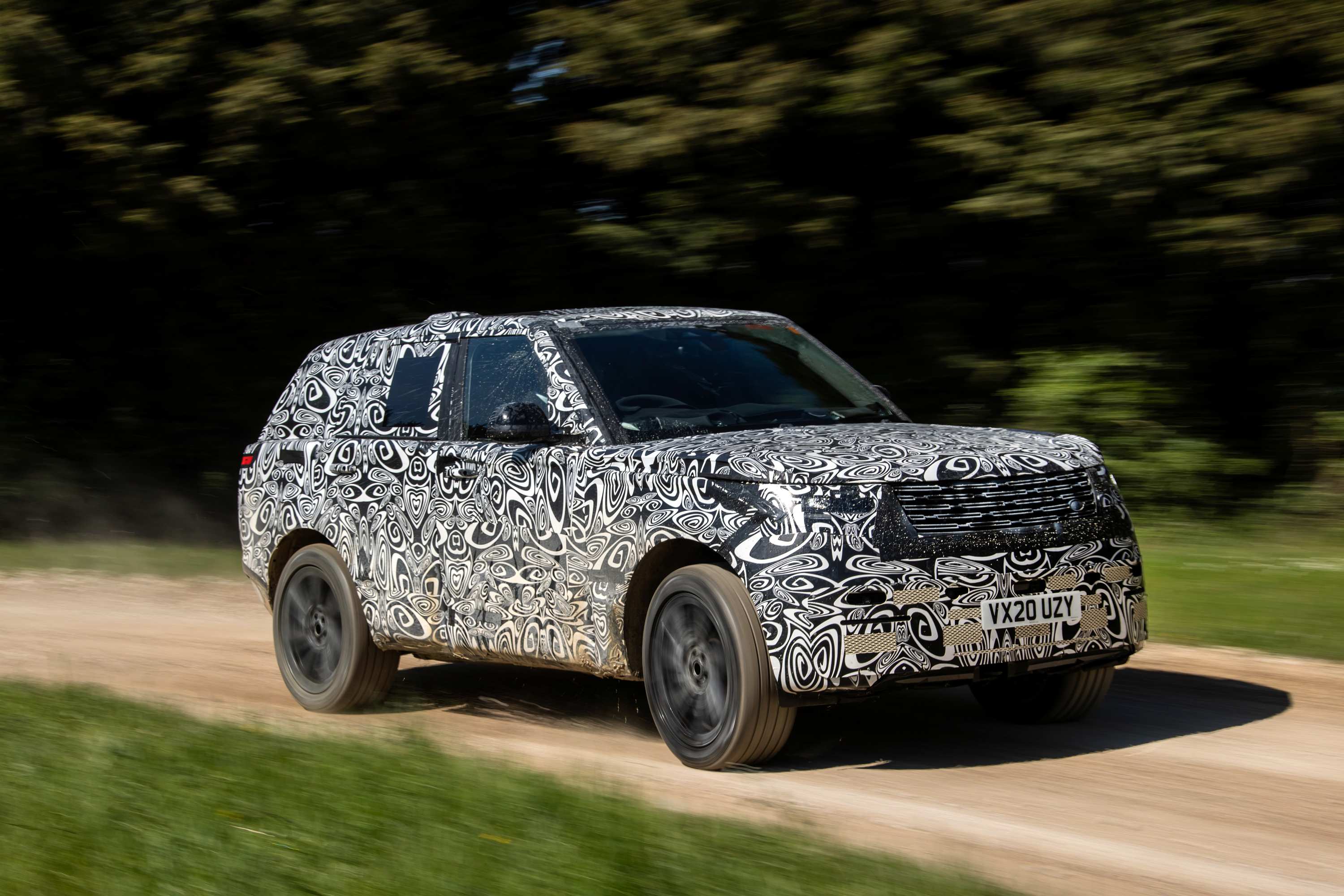 Heading up the Telegraph Track to Cape York or crossing the Simpson Desert usually isn’t on the horizon for potential buyers, yet that is exactly what they are designed for.

Yes the original purpose of the Range Rover was a luxury 4WD that would go almost anywhere in comfort. That purpose remains at the core of the latest version released this morning.

When it was first released, some 50 years ago, it was in a class of its own and that label still remains today.

There isn’t another vehicle that is as capable off road, yet as comfortable on road as the Range Rover.

While Porsche is often credited with starting the prestige SUV revolution with its Cayenne, the fact remains that Range Rover was there before them, doing what it does best. 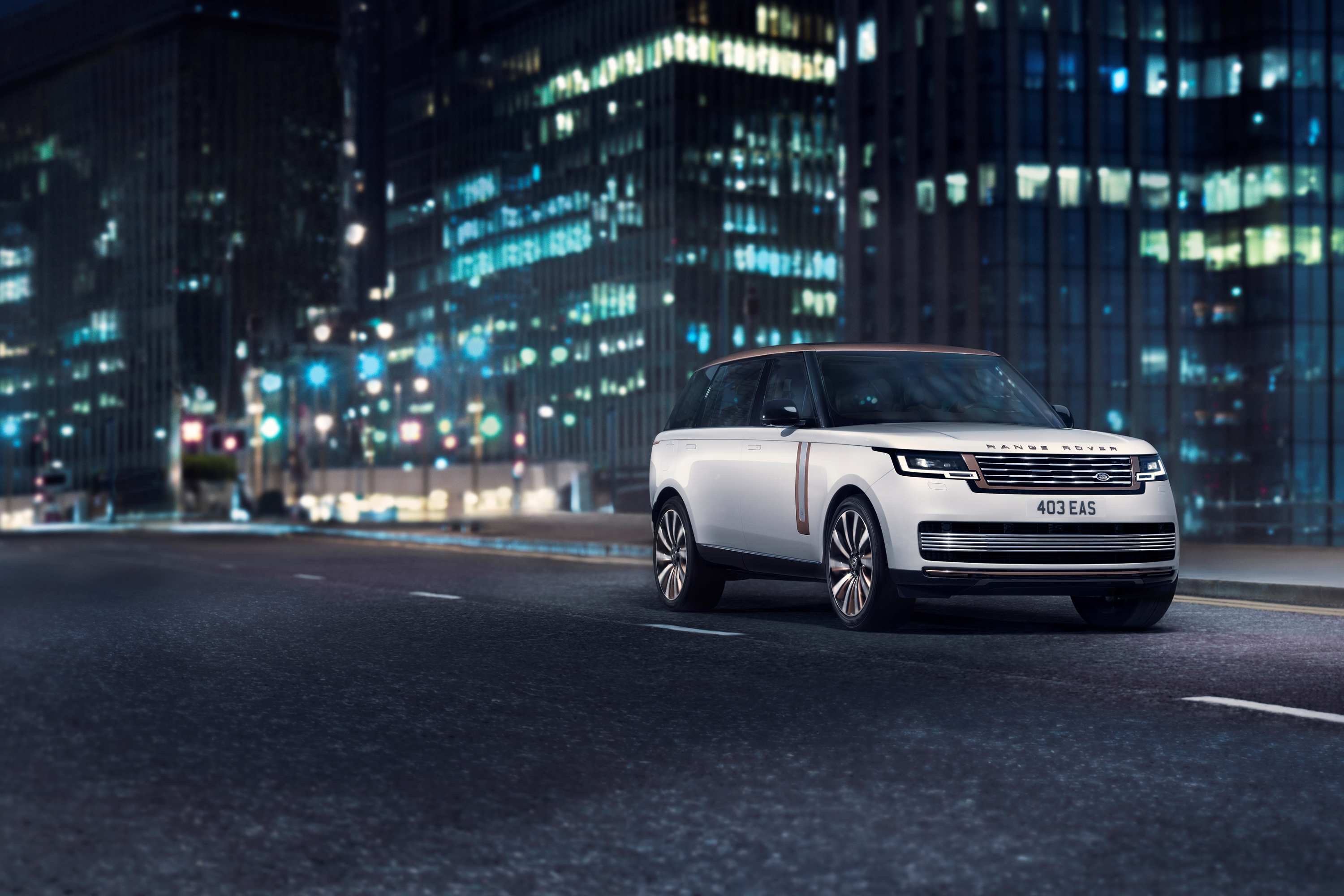 Every time they release a new model, like the fourth generation in 2012, Range Rover sets the benchmark that others follow. The latest model has morphed with an even more luxurious interior, stunning engineering and yet retains its awesome off road capabilities.

The New Range Rover leads by example with breathtaking modernity, peerless refinement and unmatched Land Rover capability informed by over 50 years of evolution.

The New Range Rover is defined by three lines that can trace their origins back through the generations; the falling roofline, strong waistline and rising sill line. These trademark features combine with a characteristically short front overhang and a distinctive new boat tail rear –complete with practical split tailgate – to create an elegant profile that conveys Range Rover’s peerless presence. 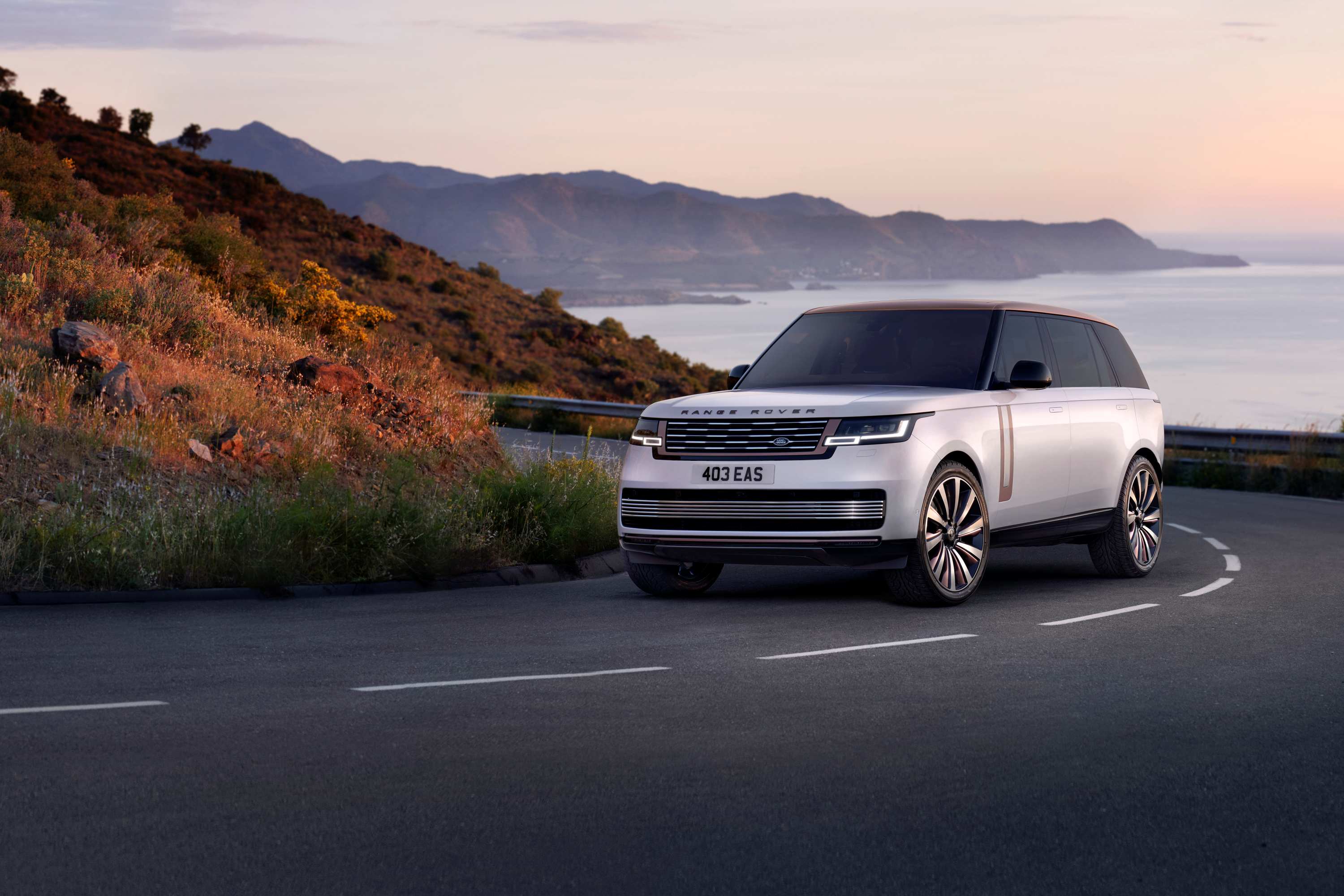 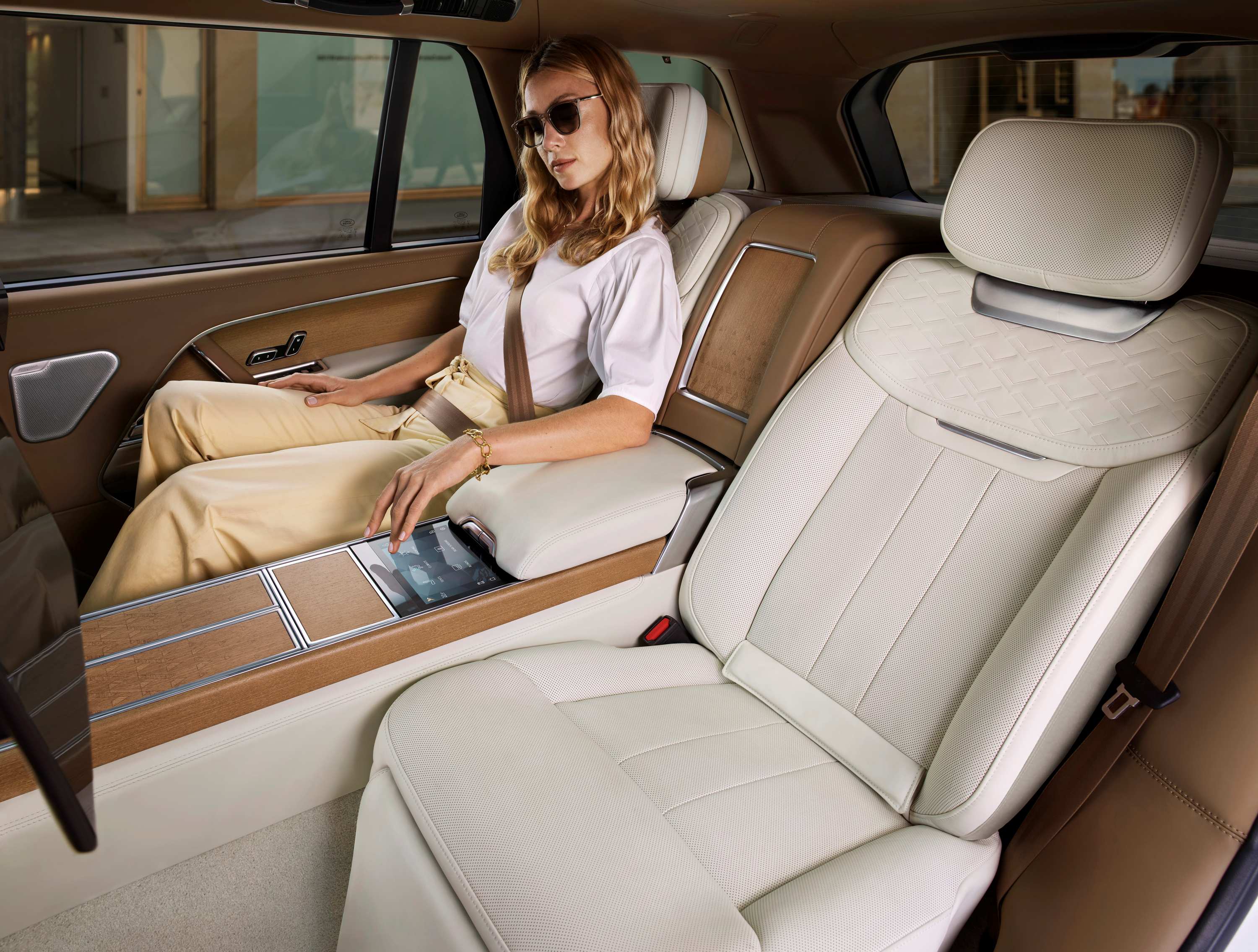 With a suite of efficient mild-hybrid and plug-in hybrid powertrains – and a pure-electric Range Rover set to join the line-up in 2024 – plus a choice of four, five or seven-seat interiors available across Standard and Long Wheelbase body designs.

The new luxury SUV is available in SE, HSE and Autobiography models.

A First Edition will be available throughout the first year of production, based on the Autobiography and featuring a unique specification. It is exclusively available in a Sunset Gold Satin finish, among a choice of five exterior colours.

Both Standard (SWB) or Long Wheelbase (LWB) body designs are available with five seats, while the New Range Rover LWB model is available with a third row for extended comfort for up to seven adults.

The new Range Rover SV is an exquisite interpretation of Range Rover luxury and personalisation from the experts at Special Vehicle Operations. The SV model is available in both SWB and LWB body designs, with exclusive features including new SV Serenity and SV Intrepid design themes and a four seat SV Signature Suite configuration. 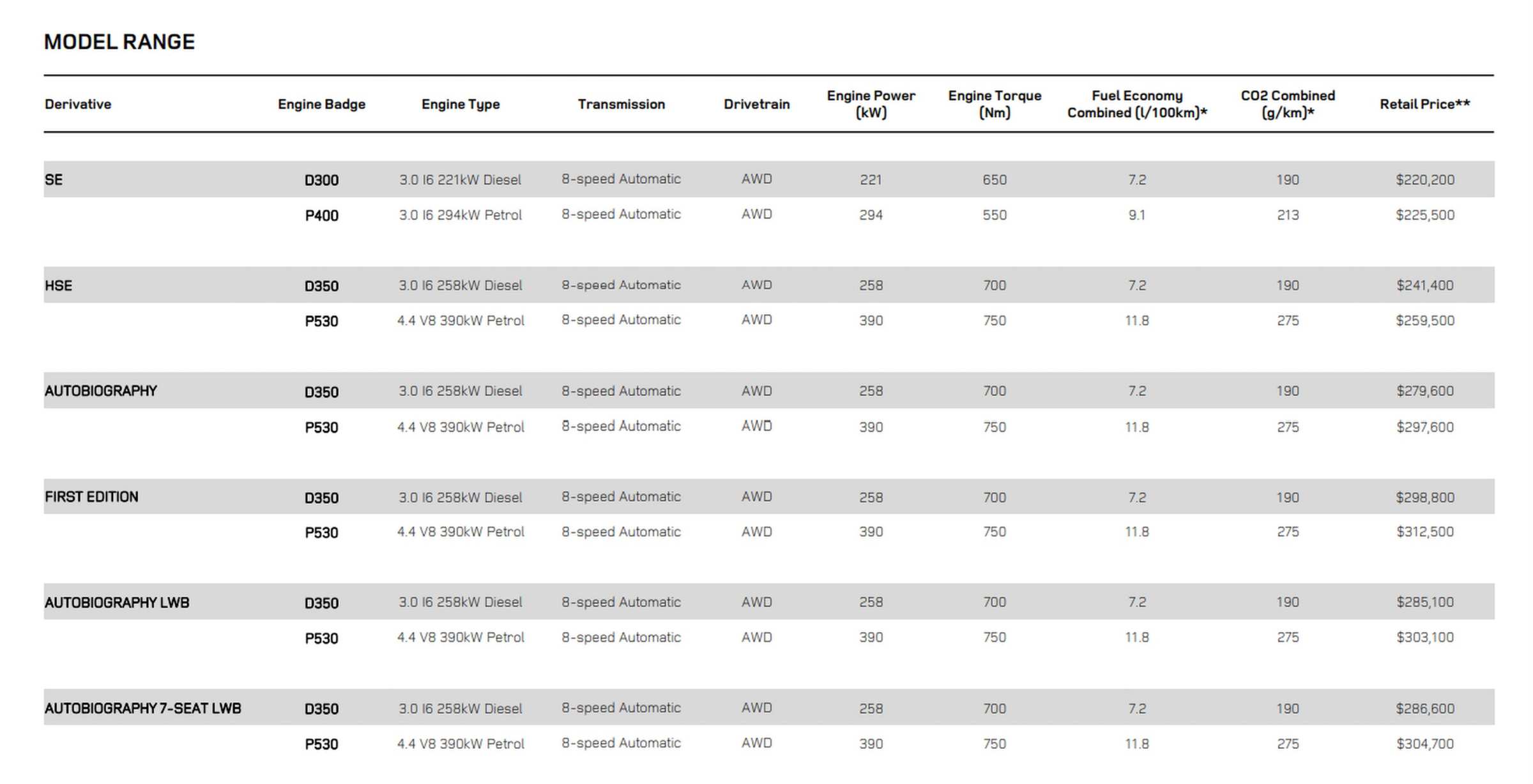 *MLP (RRP) Includes GST and LCT but excluding statutory charges, dealer costs and dealer delivery. See your dealer for RDAP. Does not include price of options. Some features mentioned in the article are options. 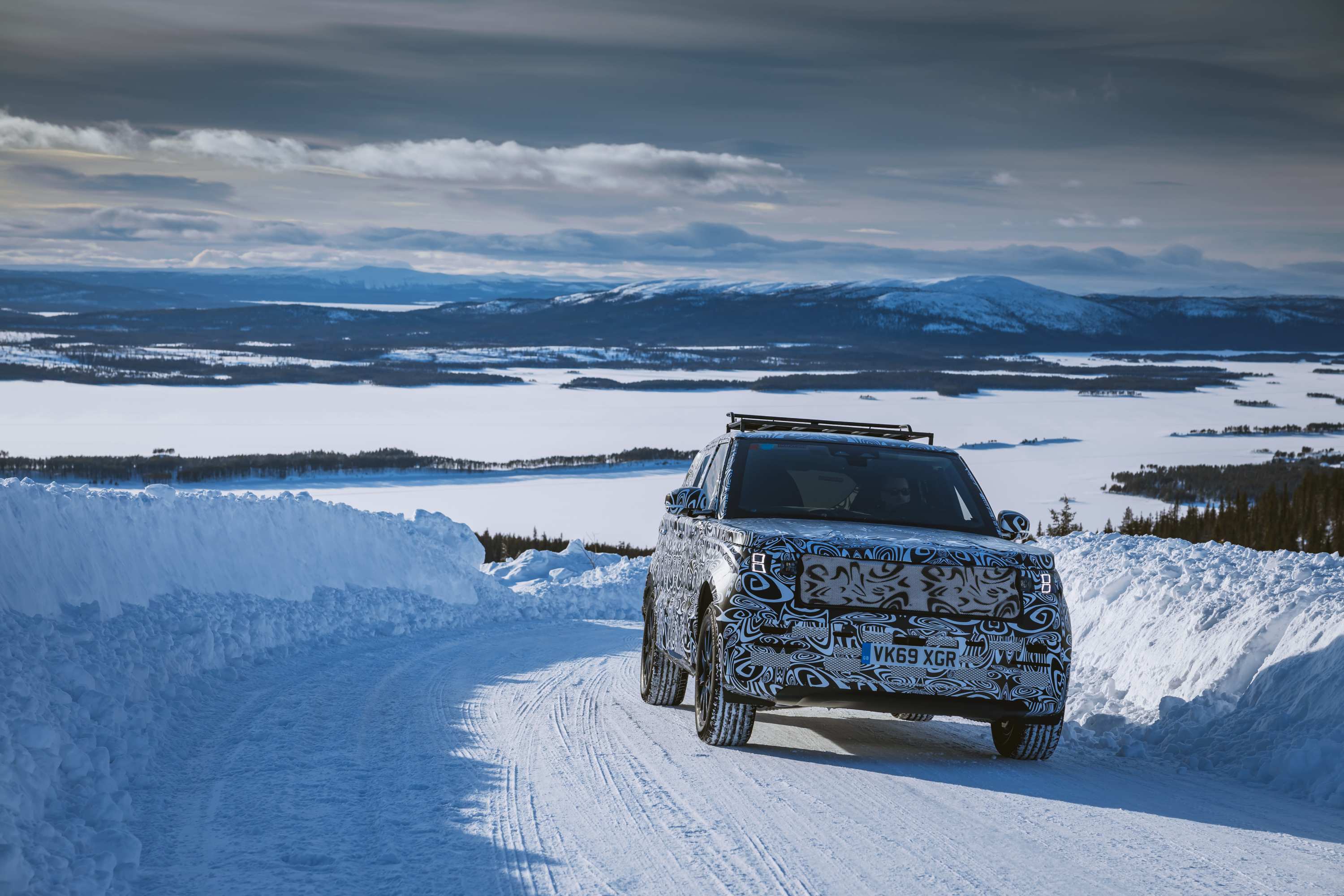 The New Range Rover is available with a comprehensive line-up of advanced six- and eight-cylinder powertrains.

The new Extended-Range PHEV combines the inherent refinement of Land Rover’s in-line six cylinder Ingenium petrol engine with a 38.2kWh lithium-ion battery – with usable capacity of 31.8kWh – and a 105kW electric motor integrated with the transmission. Together, the powertrain provides up to 100km (of near-silent pure-electric driving). With instantaneous electric torque the new P510e accelerates from 0-100km/h in 5.6s. 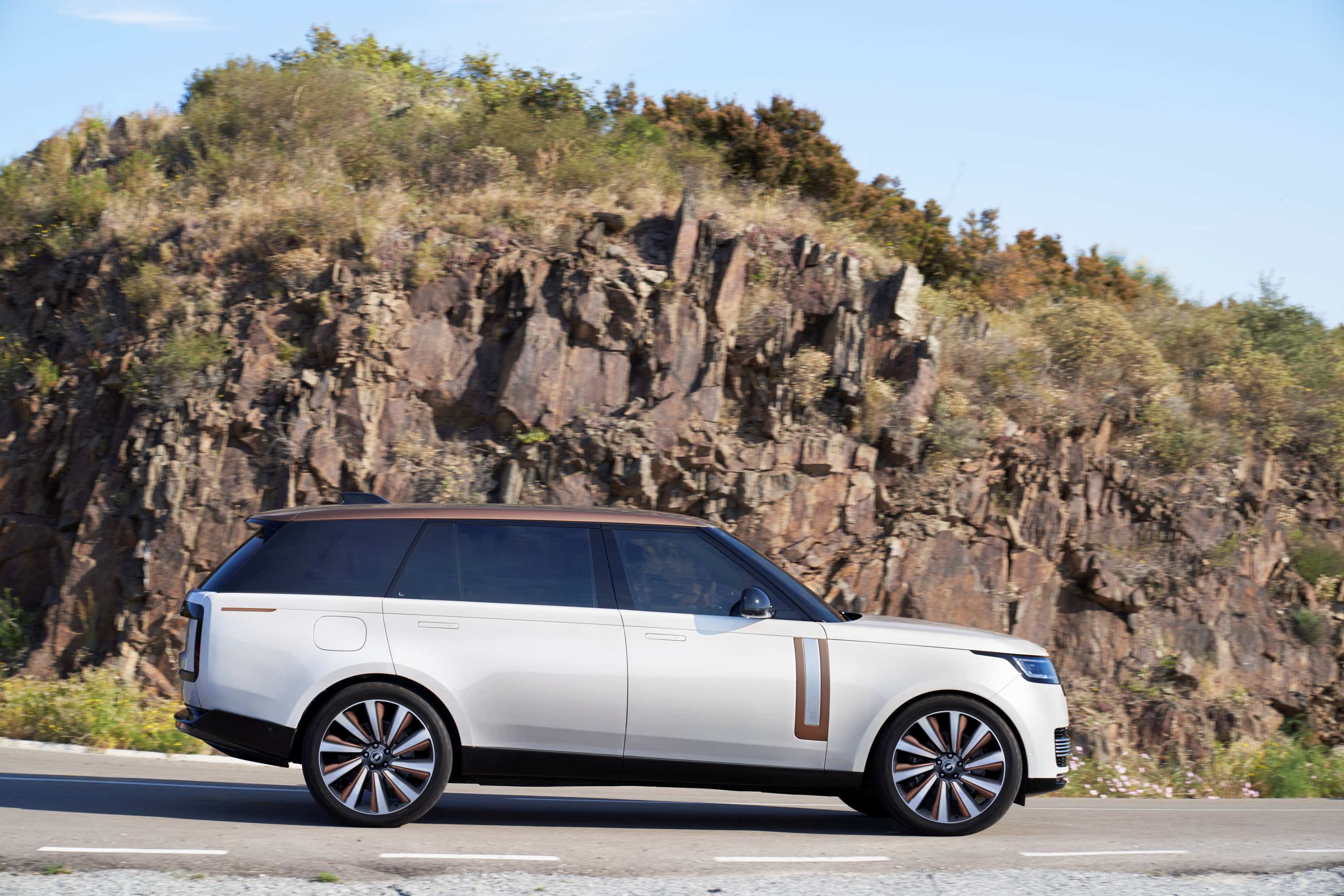 The state-of-the-art PHEV can reach up to 140km/h allowing customers to enjoy the New Range Rover as an EV-only model for most journeys in town and country, with overall CO2 emissions lower than 30g/km

Typical Range Rover customers will be able to complete up to 75 per cent of trips using electric power only if they begin each journey with a full charge. The clever packaging of the battery, beneath the vehicle and within the wheelbase, ensures both luggage space and all-terrain capability are uncompromised.

The use of advanced eHorizon navigation data also allows the hybrid system to optimise energy usage across a journey, to provide a peaceful arrival at a destination on electric power, while also optimising EV usage for travel in low emissions zones. 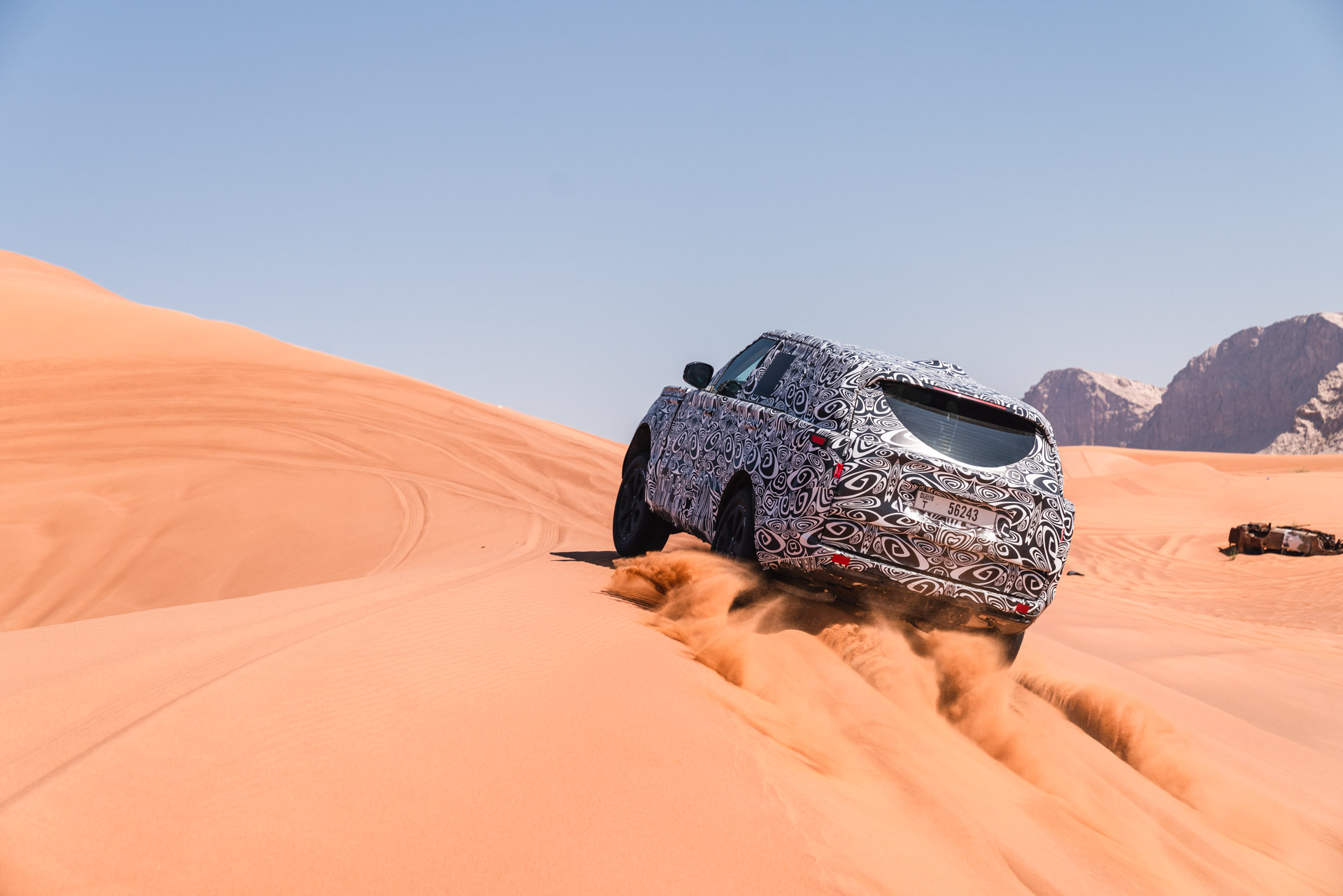 This is what seta the Range Rover apart from its luxury SUV competitors. The prodigious 4WD capability is second to none. 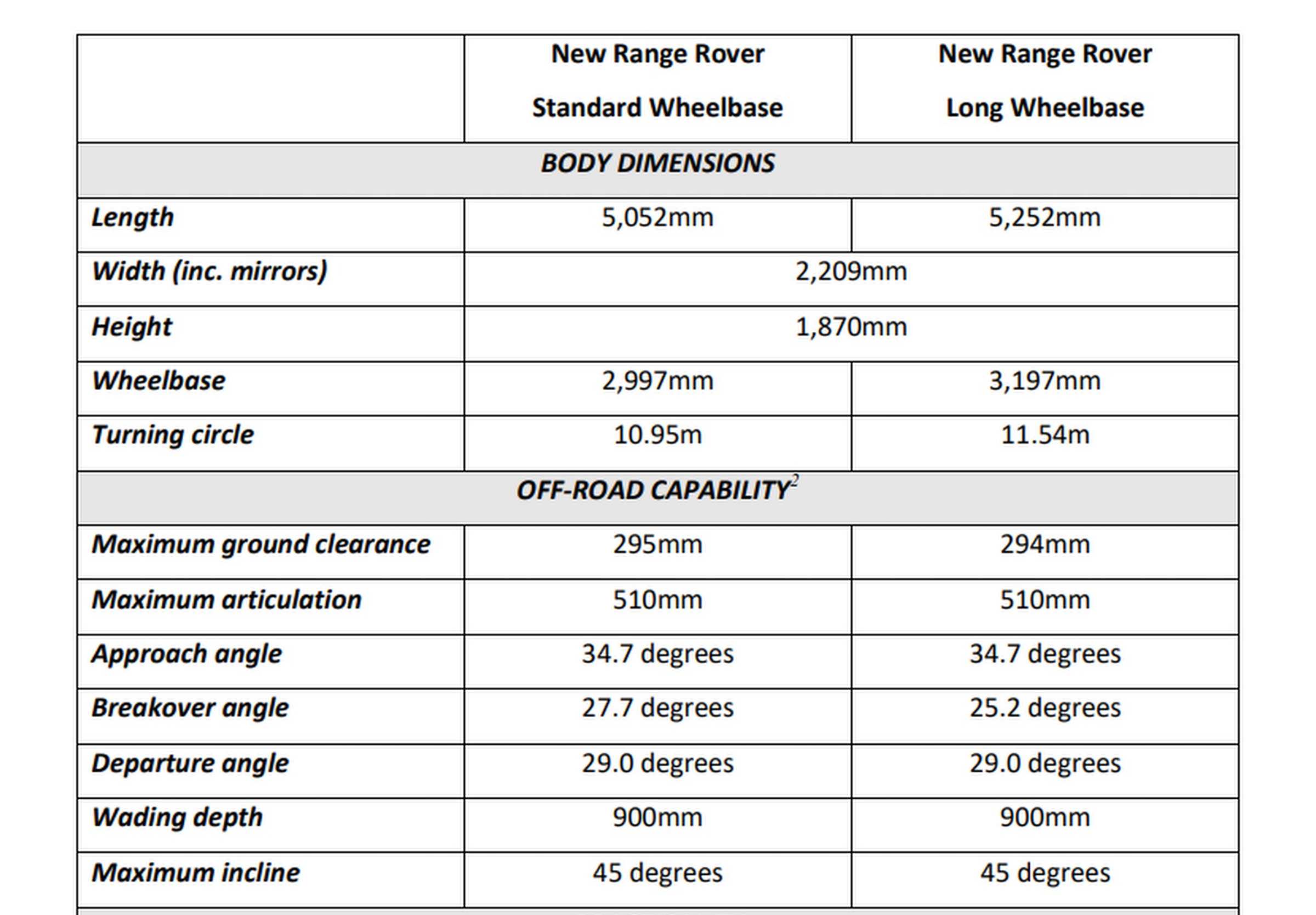 The New Range Rover has been designed, developed and engineered in the UK and, during this process, Land Rover has filed no fewer than 125 patents covering everything from its pioneering chassis technologies to its PHEV battery. Land Rover’s engineers used motorsport-derived simulation technology to put the vehicle through its paces in the virtual world more comprehensively and intensively than ever, completing more than 140,000 hours of computational analysis prior to physical testing. 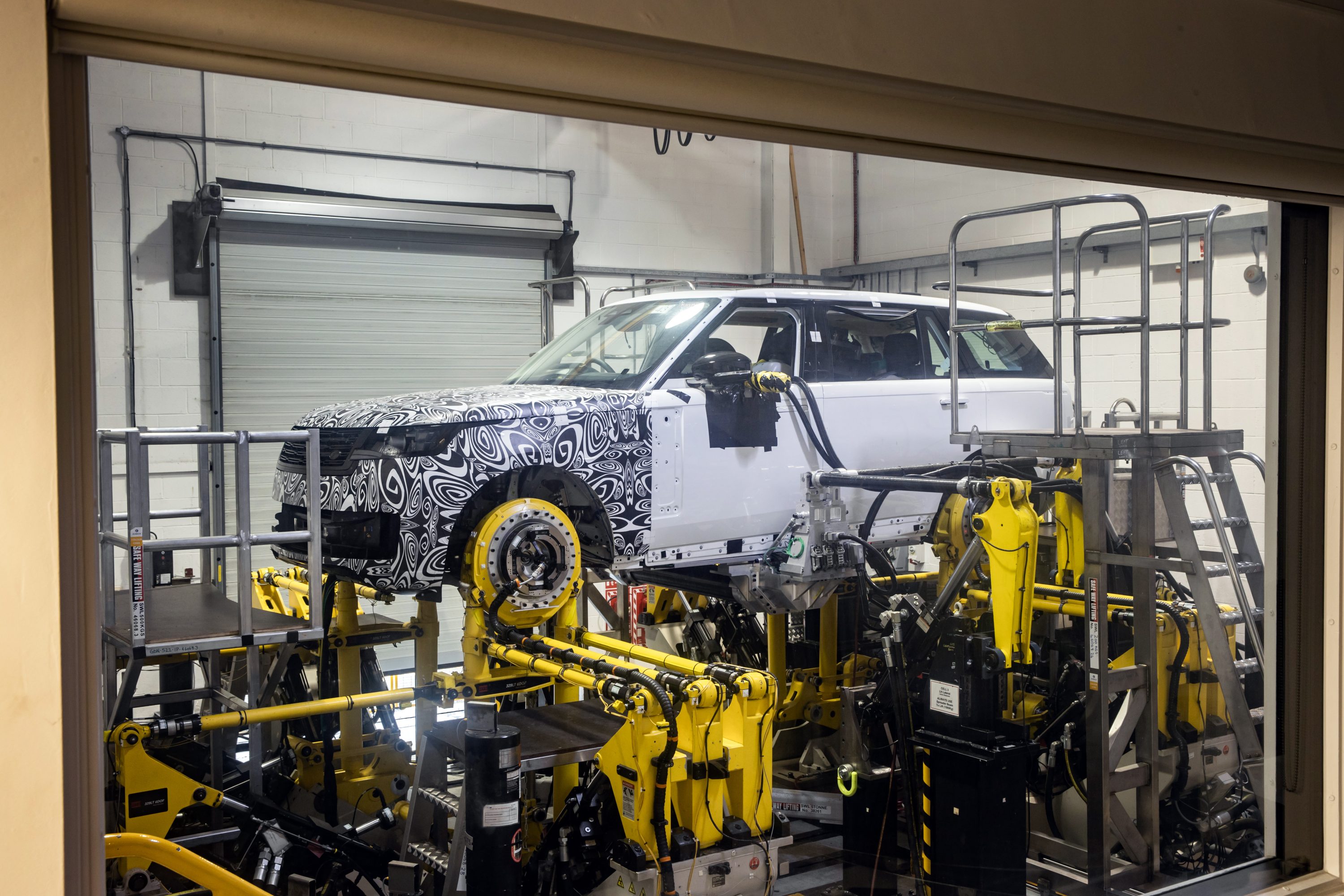 A fleet of prototypes then embarked on a punishing global test and development programme, taking in extreme temperatures ranging from the 45C heat of the desert to the -30C cold of the Arctic. The New Range Rover will be produced exclusively at the Solihull Manufacturing Facility in the UK, using a state-of-the-art production line housed in the building used to produce early Series Land Rovers. The historic building is the spiritual home of Land Rover and its reimagining as a new, ultra-modern centre for Range Rover production showcases the way the company protects its heritage.

The New Range Rover is set to arrive in Australia in March 2022 and is available to order now, priced from $220,200 in Australia.

There is of course much more to the Range Rover story and we will take you on a journey of discovery about the new Range Rover from now to the local launch dates its perhaps the most important SUV release in years.

The all new Toyota Hilux with SUV like levels of features and comfort and updated engine , transmission, body strength and a 5 Star ANCAP safety rating is challenging the latest releases from Mitsubishi, Mazda, Ford and Holden […]