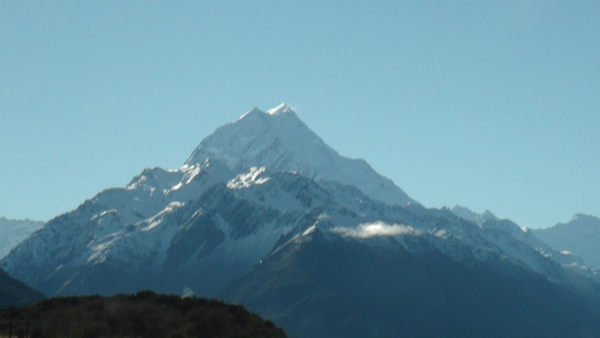 We left Queenstown relatively early as we wanted to stop along the way to Omarama. First stop though was Starbucks for a morning pick me up and we were on our way.

Not far from Queenstown at Cromwell is the Highlands Motorsport Park which is a combination racing museum private race track, skid pan, go kart track etc. In short it’s a wealthy boy’s play ground. Ordinary people are welcome though for an entry fee of $20 for the museum.

After a quick stop it was on the road again towards Omarama. The scenery isn’t like the Alpine mountains we have experienced so far but nevertheless was spectacular, especially through Lindis Pass. It lies between the towns of Cromwell in Central Otago and Omarama in North Otago, on the main inland route to the Mackenzie Basin in the Canterbury Region.

The pass lies between the valleys of the Lindis and Ahuriri Rivers. The pass is the highest point on the South Island’s state highway network, and the second highest point on the New Zealand State Highway network, after the Desert Road (SH1) in the Central North Island. Despite this, it is not considered one of the alpine passes as it located in the dry interior of the South Island. 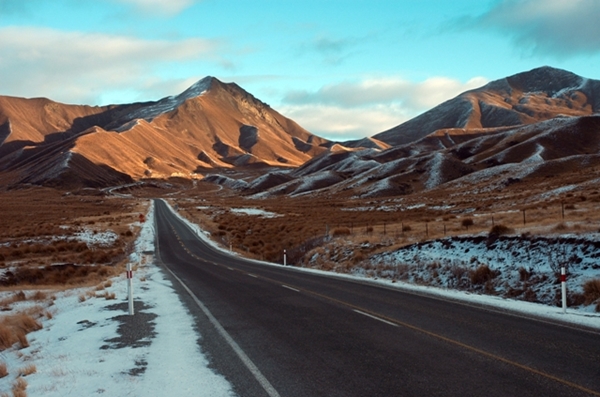 There are sections where the valley falls away in front of you and you can see between the mountains for ages. Be careful here though as often in winter, even early winter the pass can close through snow and ice and you may be left stranded. The last time we were here we luckily enough were the last car through before they closed the access off.

Once through the pass you descend into the Mackenzie Basin which is a flat agricultural basin that is full of farm land and irrigation boom sprays. For the first time on the trip we had long stretches of straight flat road where I even engaged the cruise control, something unheard of so far.

The trip from Queenstown to Omarama is around 2 or 2 1/2 hours so we decided to keep going to Mount Cook, which is about an hour up the road. On the way we passed through Twizel, which has all the hallmarks of a mining town. It turns out it was installed when they w\ere building the dams and canals of the area for the workers but has thrived on since and along with Omarama is a holiday Mecca. 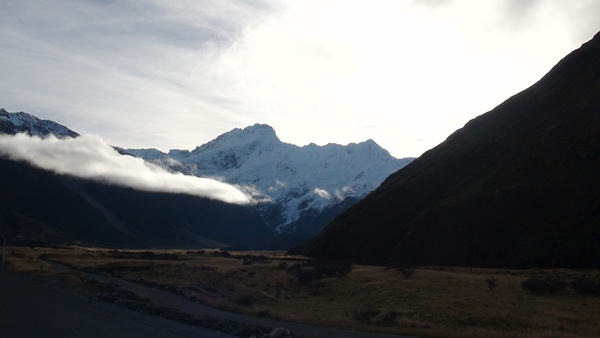 The road into Mt Cook meanders along the shores of Lake Pukaki which has that spectacular teal blue colour from the glacier rock powder. Lake Pukaki covers an area of 178.7 km², and the surface elevation of the lake normally ranges from 518.2 to 532 metres above sea level. It is relatively shallow with an average depth of 40 metres.The lake is fed at its northern end by the braided Tasman River, which has its source in the Tasman and Hooker Glaciers, close to Aoraki/Mount Cook. Good views of the mountain, 70 kilometres to the north, can be had from the southern shore of the lake. 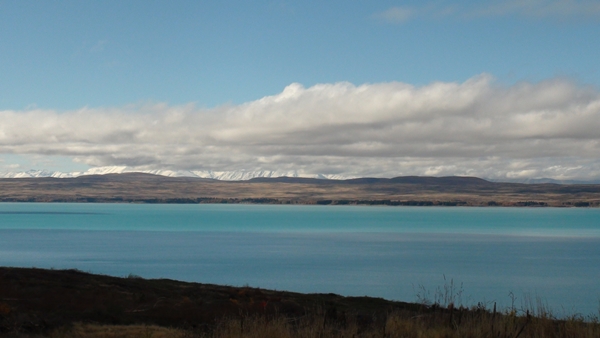 The lake is now part of the Waitaki hydroelectric scheme. The lake’s original outflow was at its southern end, into the Pukaki River. The outflow has been dammed, and canals carry water from Lake Pukaki and Lake Ohau through the Ohau A power station to Lake Ruataniwha. Pukaki is also fed by the waters of Lake Tekapo, which are diverted through a canal to a power station on Pukaki’s eastern shore (Tekapo B station). 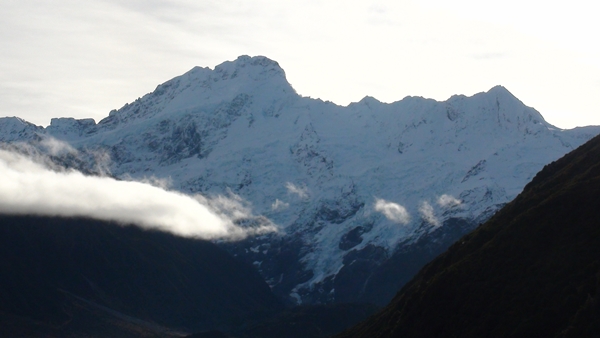 Mt Cook village I have to say isn’t what I expected of the tallest mountain in New Zealand. The village which houses the Sir Edmund Hillary memorial is basically at valley level. I guess I was expecting an alpine village up the mountain, but when you see the shape of the mountains you realise that would be impossible. However it’s an adrenalin junkies paradise with ice climbing, glacier skiing and helicopter rides to the ski fields on top. 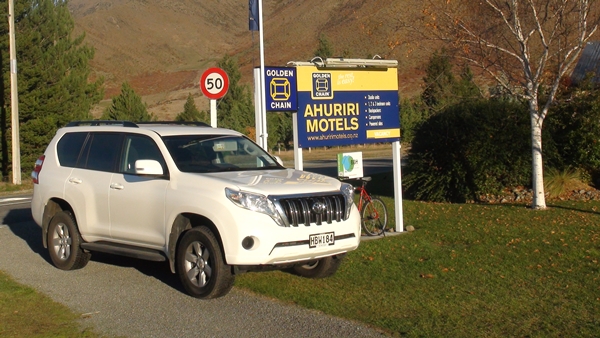 We headed back out towards our overnight stay at Ahuriri Motels in Omarama. Again we booked this motel from home on the web after searching through Twizel, Lake Tekapo and Omarama. It had the best feel and in the lead up to our stay all the correspondence with the hosts Brian and Pam had a welcoming feel. This was reinforced when we arrived. They showed us to our room, the heater was on already, a wifi card there for our use and milk in the fridge. 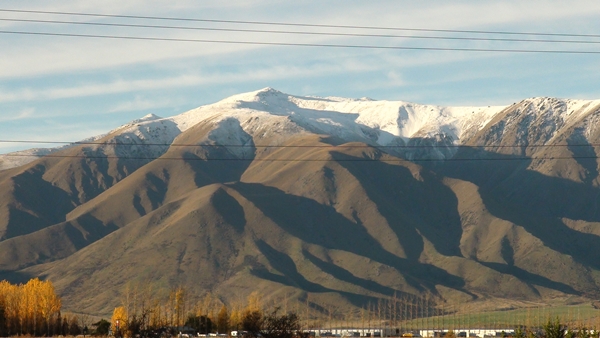 It’s those little things that make a stay all the better, rather than a number at a larger hotel chain. We had a spectacular view over snow capped mountains from our room as well.

The rooms were originally built as single mans quarters for the building of the dams etc, but they are very neat, clean and serviceable. The bathroom is a little unusual but the wifi is fast and the beds very comfortable.There is everything there you could need in the rooms and represents excellent value for money, especially if you want to stay a few nights and base yourself for local exploration.

The surrounding area is full of activities such as boating, fishing, hiking, bike riding, camping, gliding, 4wd tracks, water skiing and unlike the lake at Queenstown you can actually swim in Lake Ohau or Lake Benmore without freezing. There is even a winery called Ladybird Hill Vineyard that has a great restaurant and if you want Salmon for lunch or dinner you can catch your own. Both big and little kids love that idea.

Unfortunately we are only staying one night on this trip but we will be back to explore a lot more and when we do we will stay again at Ahuriri Motels with Brian and Pam as they make perfect hosts. They are full of local knowledge and I hear Brian is a bit of a 4wd enthusiast.

2014 NZ Trip Things to do in Queenstown

May 13, 2014 Rob Fraser Activities & Things to Do, Travel Articles, Uncategorized Comments Off on 2014 NZ Trip Things to do in Queenstown

Our stay in Queenstown is coming to an end unfortunately. Over the few days we have packed heaps in, including some of the main attractions. Here are a few of them for the not so action adrenalin seekers amongst us. […]

May 11, 2014 Rob Fraser Places to Go and Stay, Travel Articles Comments Off on Franz Josef to Queenstown New Zealand 2014

So how would I rate our drive from Franz Josef to Queenstown? It was simply awesome to see the diversity of scenery, the engaging roads and experience so much of the difference of what makes the South Island of New Zealand so special all in one day. […]