Toyota Kluger was first released to Australia in 2003 and the latest version of the Kluger was first introduced in 2014 with a significant upgrade in early 2017. We had on test the GX model which is the range entry version.

To say that the Kluger has been a successful model for Toyota is like saying Bradman was a good batter in cricket. It has been hugely successful and the reason is simply that it works for the family. Every time I drive the Toyota Kluger I can’t help but think that somehow they got inside a women’s mind and worked out what they want in a family SUV because they know what they want.

We have previously reviewed the Kluger a number of times so let’s just go with a quick overview to start. It is a 7 seat 2WD and AWD SUV featuring a 3.5L V6 engine (upgraded 2017) with practical versatility and amazing internal space. 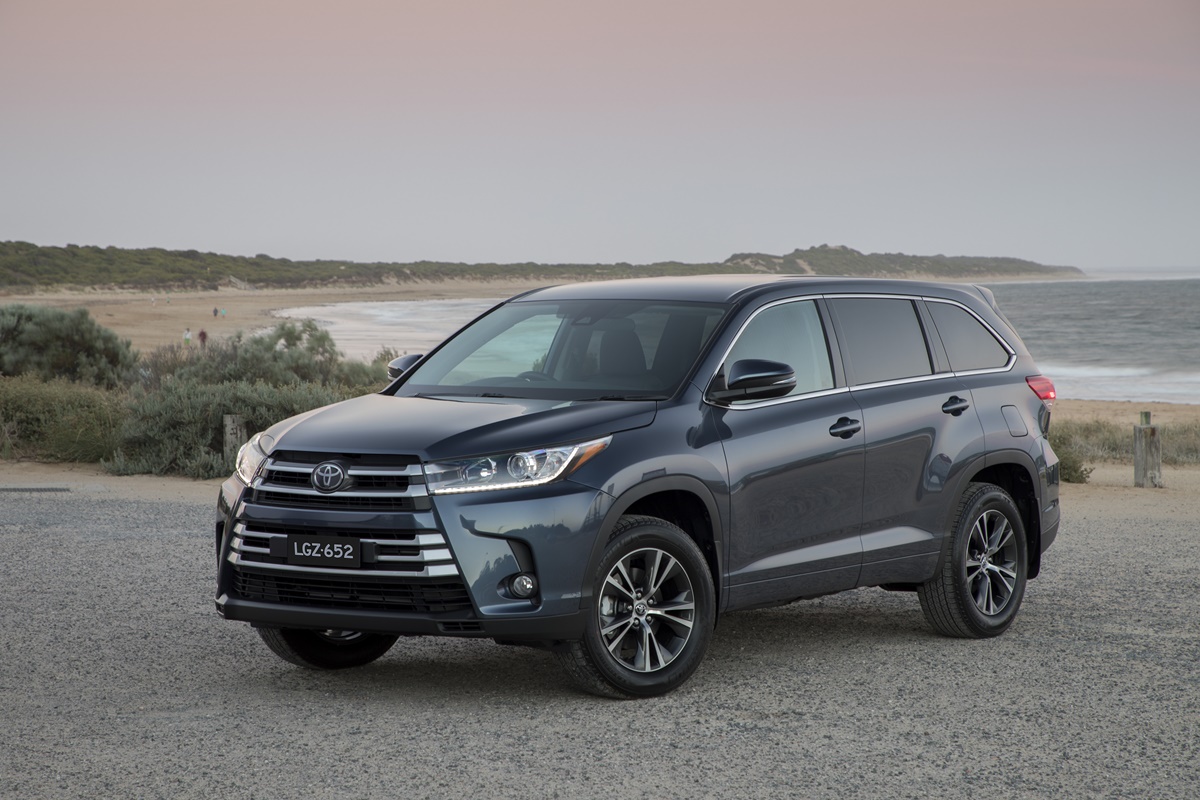 The Kluger looks good for a family wagon, drives with almost car like handling and ride, has an abundance of standard comfort and safety features and sells in droves for Toyota.

The Kluger has an upright bold look with a high grill and sleek lights and bonnet. The Kluger had LED daytime running lights, auto dimming headlights and LED taillights. It runs on 18 inch alloy wheels with 245/60 R18 tyres.

Without having an abundance is styling, the Kluger manages to exude a distinctive presence. 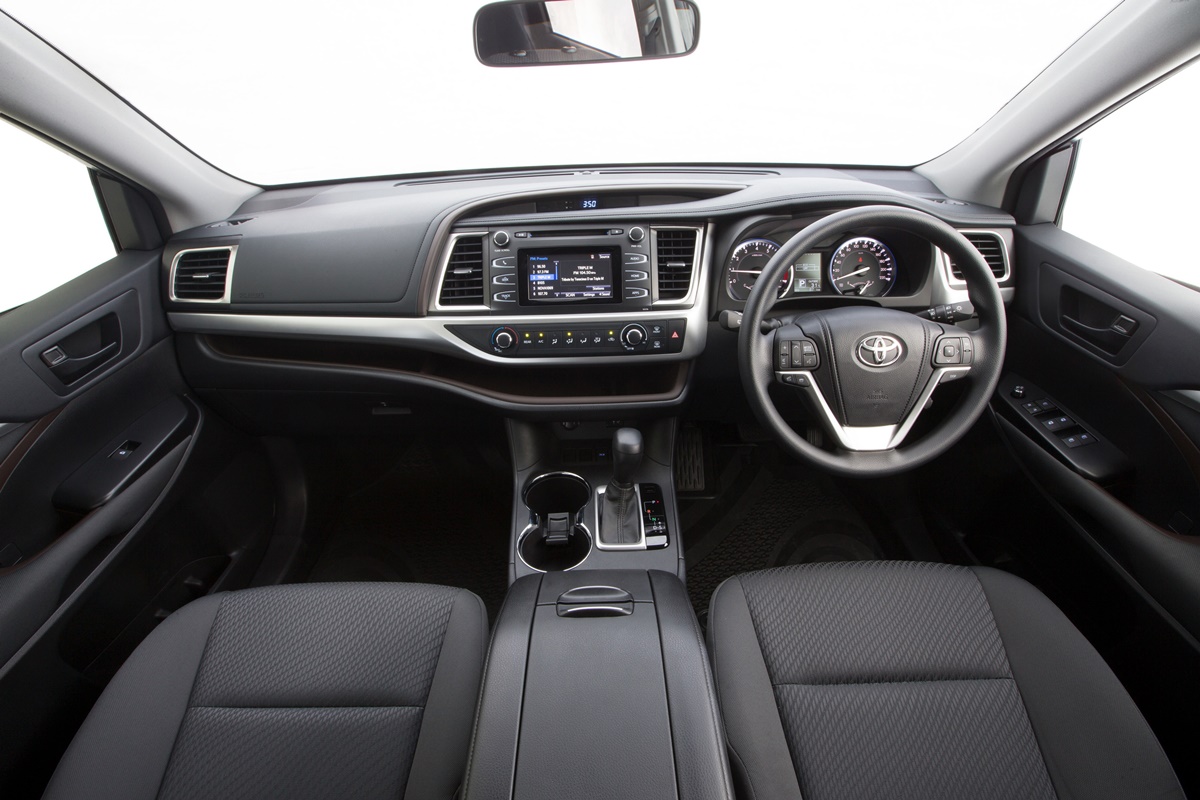 Jumping inside the Kluger GX produces an immediate feeling of space. The fabric seats are reasonably comfortable but lack adjustable lumbar support.

They do give you enough slide for taller drivers and the height and reach adjustable steering wheel every driver should be able to find their perfect driving position.

The dash is easy to read and simple to navigate. The centre stack houses the infotainment system that again is easy to read and use. Unlike a lot of the Toyota systems this looks integrated in to the dash. It also does look a little plastic though. Bluetooth connection is a breeze. Toyota’s insistence on not using Apple Car Play and Android Auto is a limiting factor in the range. Unfortunately there is no satellite navigation system.

For a fairly large SUV there is good visibility for the driver with good reversing camera, large external rear view mirrors and decent internal mirror.

Even for taller drivers such as myself there is ample head and shoulder room.  The second row of seats are again comfortable, even for three. Again ample head shoulder room. With the flat floor there is room for the middle passenger feet as well. With the driver’s seat fully back there is enough room for me to sit behind myself in comfort.

The third row of seats is amongst the best in class and both rear rows from air-conditioning vents. In line with the perfect SUV theory there are cup holders and storage bins everywhere. The centre console is probably the biggest and best designed in any vehicle. It serves as a great arm rest and is cavernous as well as practical. 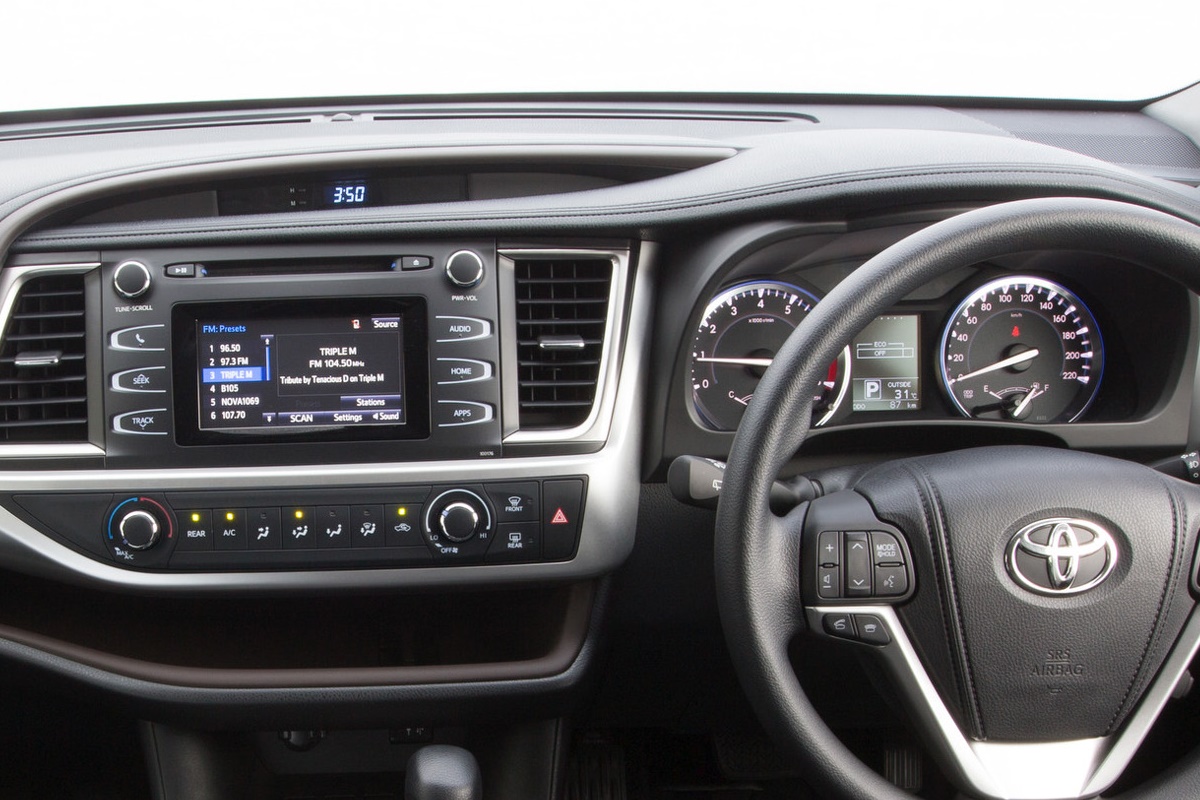 The list of standard features on the GX is impressive even though it is the entry level model. 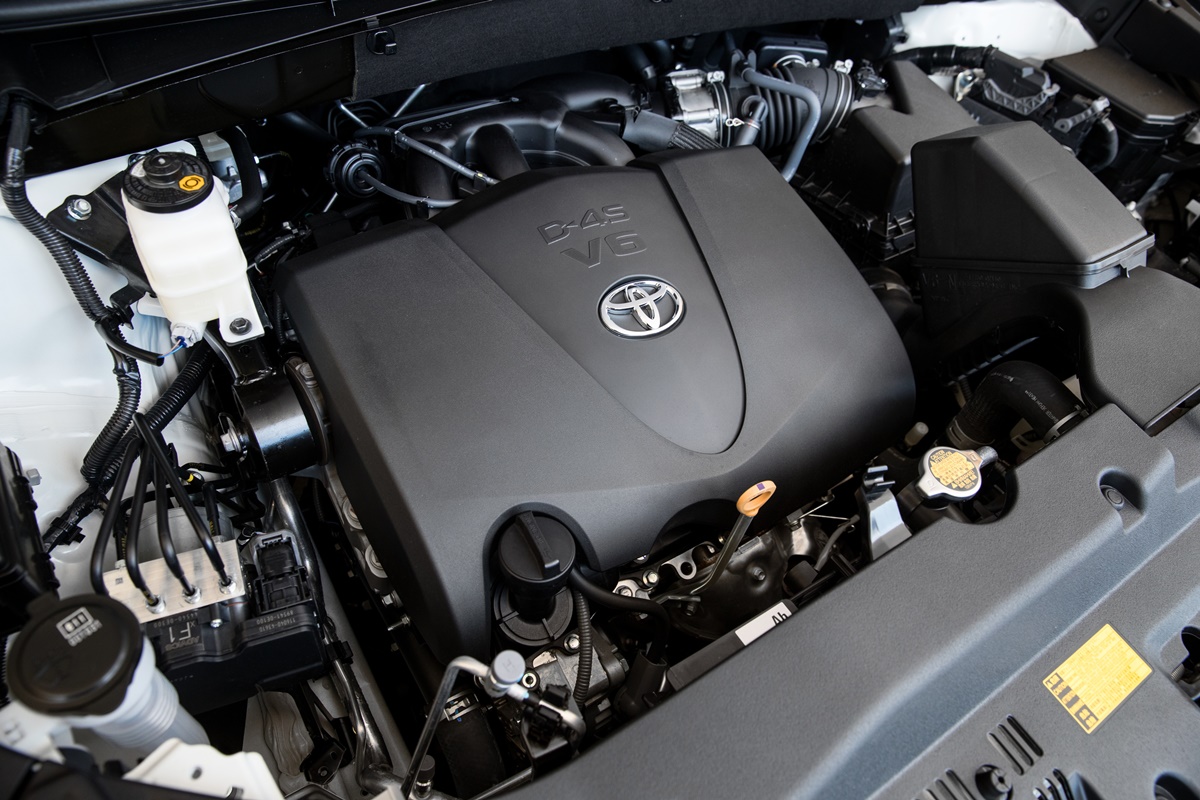 Toyota has persisted with the V6 petrol engine. It obviously is what the market will accept but with so many efficient powerful diesel engines on the market today in competitors SUV’s I would have thought that they would have at least offered it as an option.

The 3.5L V6 petrol engine produces 218 kW @ 6,600 rpm of power and 350 Nm @ 4,700 rpm of torque. The Kluger, in an effort to improve driveability and economy, now has an 8 speed Automatic transmission.  It isn’t a powerhouse or exciting but neither does it lag the traffic or feel sluggish. It is adequate for the job.

Even though the Kluger 2WD sales are increasing it at heart is an AWD SUV and that is its roots I guess you could say. It has a ground clearance of 200 mm but doesn’t have good approach, ramp over or departure angles.

It is really an AWD SUV for forest trails, down to the snow for a weekend, some sand driving and towing the Jet Ski. The AWD system in the Kluger is the Dynamic Torque Control AWD. It really is a safety feature as much as anything.

It saves fuel by driving only the front wheels when the vehicle is cruising, switching to AWD when needed ensuring an ideal torque split – up to a maximum of 50 per cent 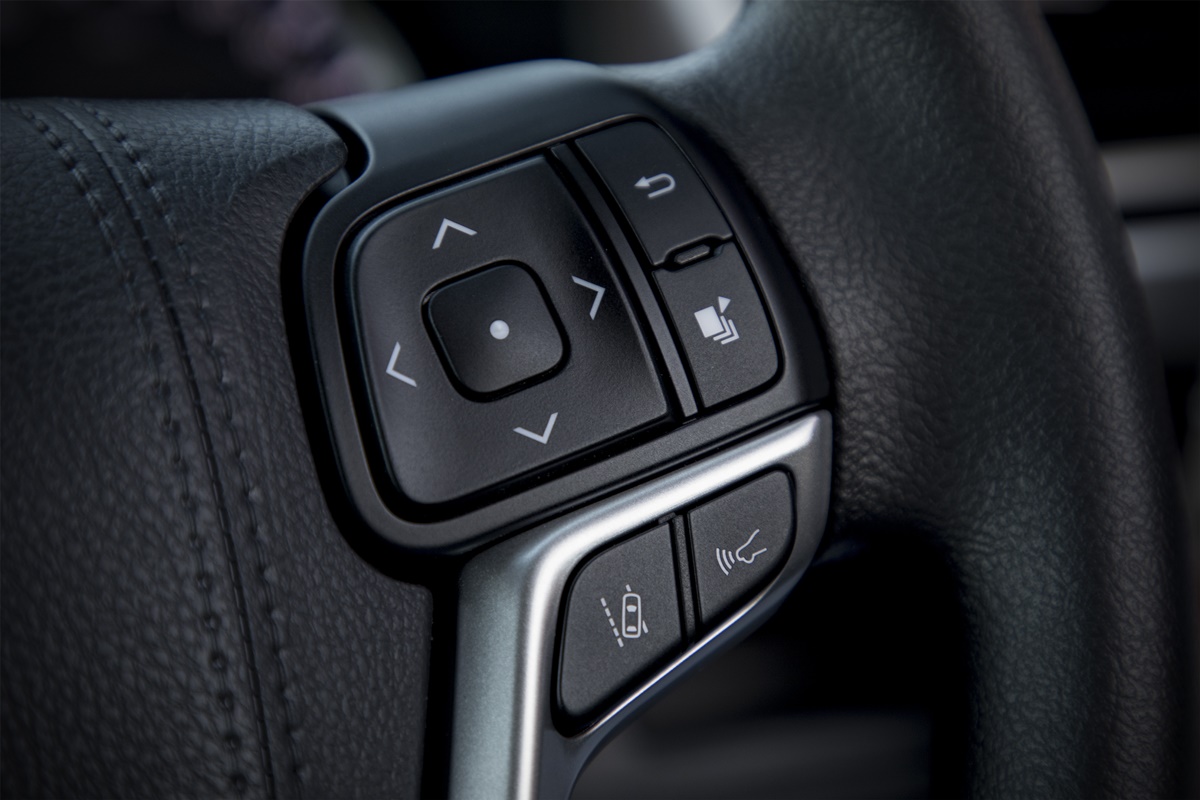 The 2017 upgrade has seen the safety of the GX improved. The Kluger has an ANCAP 5 Star safety rating.

So to sum up the Toyota Kluger GX. It could be described as the perfect family wagon. It does everything with a minimum of fuss, isn’t fazed by anything in its daily life and transports the family in comfort and safety.

It is limited in some safety and comfort features and lacks sat nav. For the family it isn’t too expensive. It is however a little boring and still is a bit heavier on fuel than alternative diesel engine SUV’s.

However Toyota continue to sell heaps of the Kluger but not so many of the GX version.

To say that the Kluger has been a successful model for Toyota is like saying Bradman was a good batter in cricket. It has been hugely successful and the reason is simply that it works for the family. Every time I drive the Toyota Kluger

About Rob Fraser 984 Articles
Rob Fraser – General dogsbody & Director Rob is the founder of the business. He constantly mutters something about way too many red wines one evening being to blame. He first learned to drive on the farm in a left hand drive WW11 Jeep when he was 11, many years ago. He has maintained a strong interest in the industry ever since and was hooked on 4WDriving way back then. Having previously lived at the top of corporate life he retired in 2000 and hasn’t put a suit and tie on since. Cars are his passion so why not have a business doing what you love he figures. He has towed either a caravan or camper trailer to most parts of Australia, has run guided tours for camper trailers’ and instructed drivers in off road towing Often known for taking the 4WD in the driveway over the sports car, he has travelled pretty much everywhere in Australia and when he is bored goes for a drive.

Driving in the snow isn’t a common occurrence in Australia. Apart from a few months of the year and in limited locations, there isn’t much opportunity to develop these skills and as such know what to do or even how to prepare your vehicle. […]

The Toyota Prado Kakadu 7 seat 4WD wagon. It combines all the bling for the family and the 4WD capability for the enthusiasts. Even though it is some $84,000 it actually is pretty good value. It is relatively affordable, has genuine 4WD capability […]