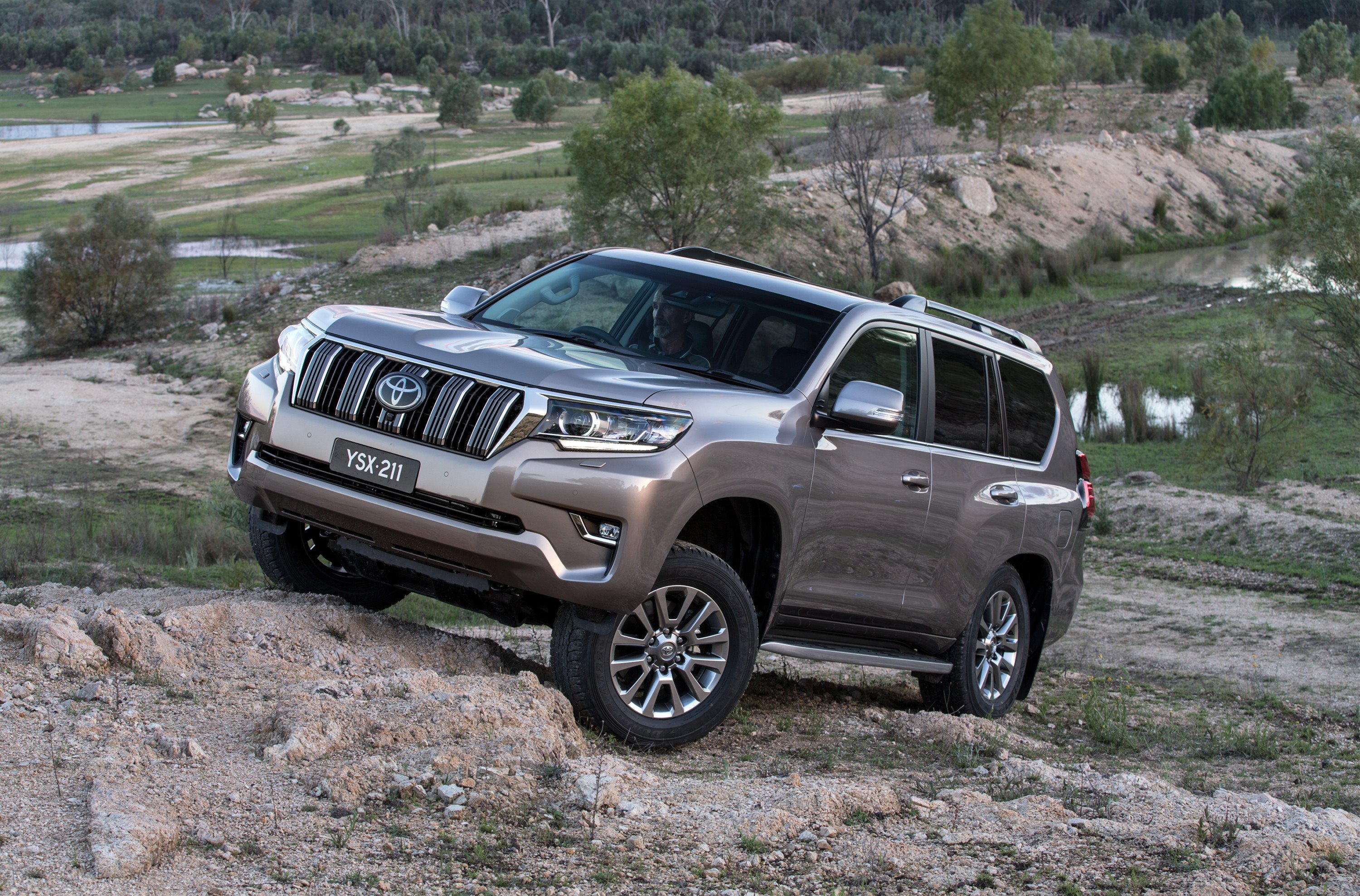 The Toyota Prado Kakadu 4WD 7 seat wagon we are testing here, is the top of the range with a complete range of standard features. It has all the bling, but in some ways has always been an underrated 4WD.

Often dubbed a soccer mum taxi, the Prado has always had excellent off road ability. It’s just that many owners never explored those qualities. Updated in both 2016 and again in 2017, the Prado has managed to keep at the forefront of the segment

Externally the LandCruiser Prado’s robust exterior features a revised grille with broad vertical bars and slit-shaped cooling openings, flanked by restyled Bi-LED headlamps with the main beams positioned inboard to avoid damage from obstacles when off-road driving. At the rear, there are new lamp clusters and a smaller garnish incorporated within the number-plate surround.

There are front and rear fog, roof rails and t runs on 265/60R18 tyres on alloy rims. Recent upgrades has seen he bonnet acquire similar bonnet sculpturing to the LC200 series. This actually assists visibility. There are some muscular wheel arch bulges and the whole lines actually look pretty good. The lower corners of the front and rear bumpers now kick upwards, to enhance off-road manoeuvrability. 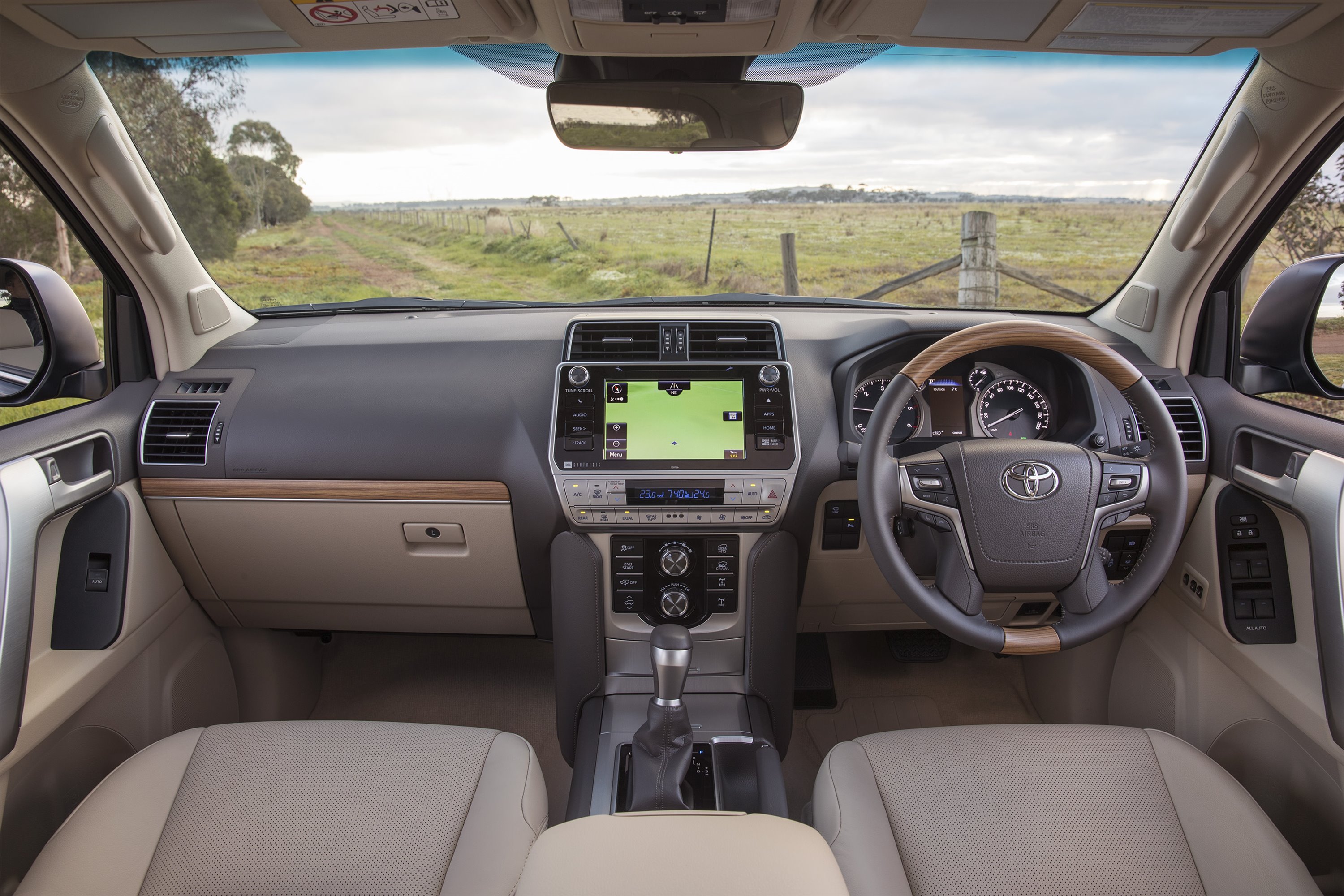 Inside, LandCruiser Prado has a redesigned dashboard, instrument binnacle and switchgear. The revised centre console incorporates a flush-surface air-conditioning control panel and has a low profile at the top for a sleeker appearance and improved forward visibility.

The front seats are excellent, having both heating and cooling and being electronically multi adjustable along with the electronic adjustable steering wheel means that all drivers can be comfortable. The steering wheel is thick with a wood section but not woodgrain. It has all the controls you would expect. One feature I really like, even though other reviewers dislike it, is the simple to use cruise control stalk, and the auto ACC thankfully is easy to override.

The dash is clearly visible through the steering wheel with has two large and two small dials with a feature packed MFD in-between. It tells you everything you need to know and more than you want. At this price range I would have liked a heads up display.

There is subtle woodgrain look everywhere, a soft touch dash and subtle style features throughout. The ambience is luxurious without being tacky. Add to this grab handles everywhere and lots of little cup, bottle and nick nack storage areas.

The central console is replaced with a chiller box. That is both good and bad, great for keeping drinks cold for the kids, not so much for mixed storage. The centre stack houses the controls for the Adaptive Variable Suspension, Kinetic Dynamic Suspension System (KDSS), Multi-Terrain Select (MTS) and crawl control. It takes a little adjusting to.

The stack is otherwise well laid out, easy to use and simple. It houses the 8 inch screen and audio system.  The display also features the panoramic surround camera view, satellite navigation and the reversing camera. There is a 14 speaker sound system to soothe the nerves or pump up the kids. Again Toyota refuses to integrate Apple Car Play and Android Auto. Also the screen is a little insensitive to touch on occasions. Behind the transmission lever is the drive mode select which actually does seem to work well.

Both front and reap passengers have plenty of head and shoulder room. There is enough front seat slide for front occupants. Rear passengers have a little restricted knee room but overall it is great for four and even five occupants. The almost flat footwell also provides more comfort for the middle passenger. Rear seats are heated as well.

The rear seats will fold flat on a split arrangement to give a flexible boot area. While not cavernous it is more than adequate. The best thing Toyota has done is get rid of those ridiculous fold up rear seats. The third row seats will fold electrically. Rear passengers also have the benefit of separate controls for the air conditioning as well as the Blu-rayTM rear seat entertainment system with three wireless headsets, perfect for keeping the tribe quiet.

One thing to note is that overall visibility from the Prado is surprisingly good. Over bonnet view is improved, there are great internal and external mirrors and the rear and panoramic camera is awesome. The other great thing about the Prado is the rear mounted full size spare. No underbody slung spare that gets damaged and useless when you need it most. 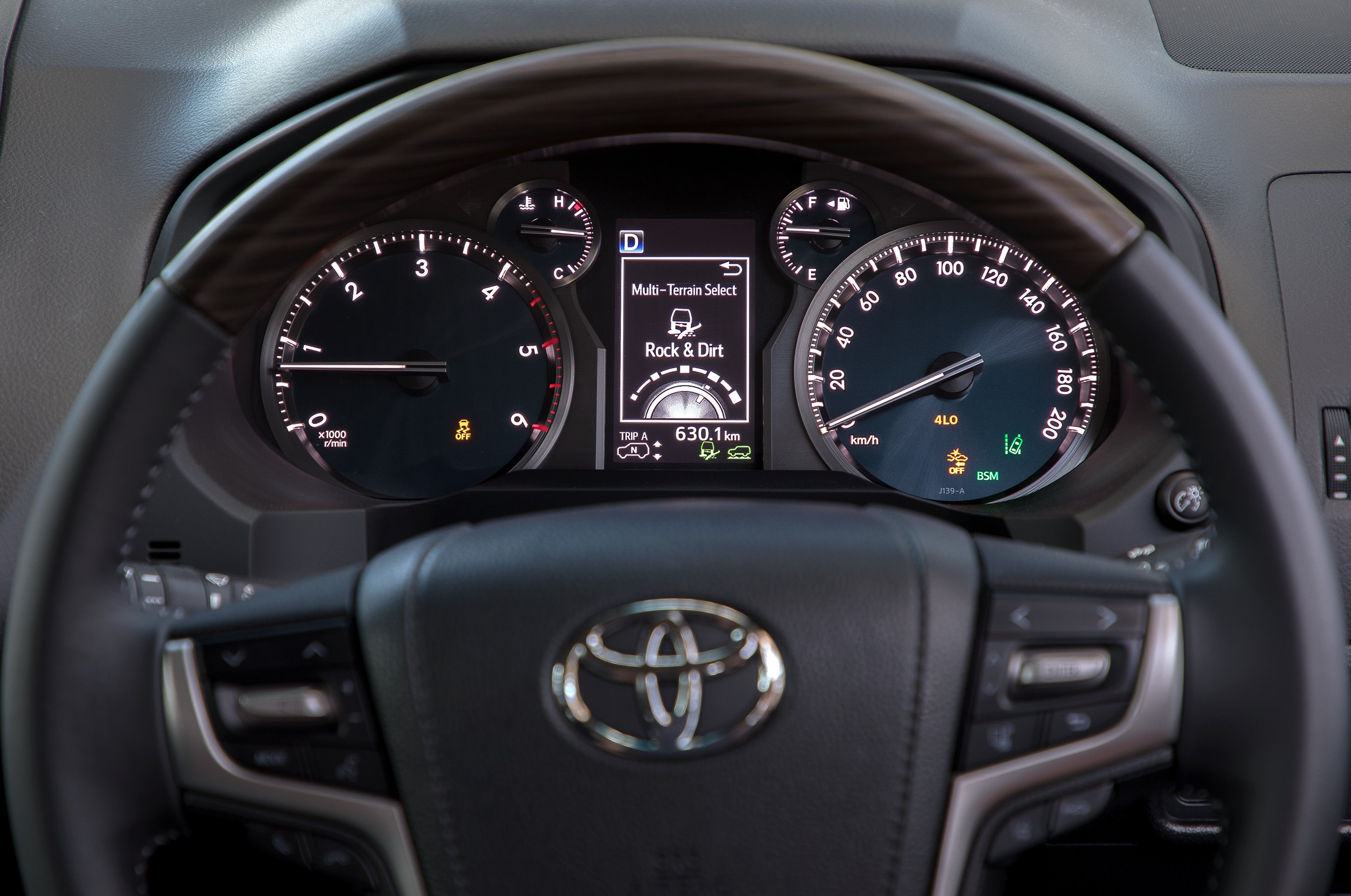 Even though the Kakadu is packed with features some to be appreciated include: 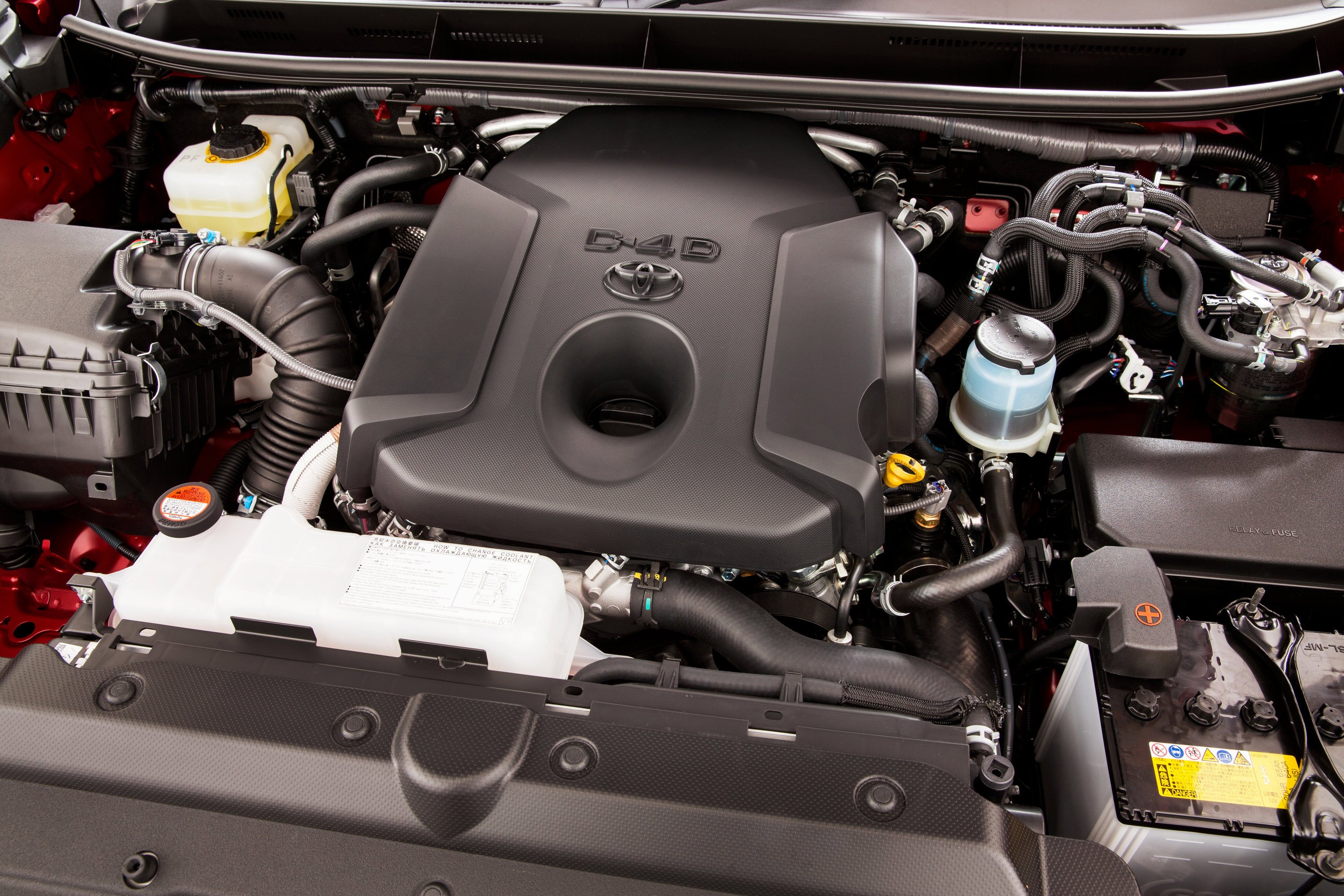 The Prado Kakadu is now offered with the same diesel engine that sits in the Hilux and Fortuner vehicles. It is a 2.8L, Four cylinder in-line, 16-valve, DOHC diesel that produces 130kW @ 3400rpm of power and 450Nm @ 1600rpm of torque (auto version). The manual has torque of 420Nm @ 1400rpm. This runs through either a six speed manual or six speed automatic transmission. The Prado has constant four-wheel drive; two-speed transfer case with lockable centre Torsen LSD.

This combination of low torque and well suited transmission means that for a relatively large 4WD the Prado is frugal with diesel using just 8.0L/100k ADR. In real world use, the Prado is certainly economical, especially on the freeway. This will see you getting upwards of 1200km out of a tank of fuel.

The Kakadu will tow 3000kg. The recent engine power upgrades have enhanced the Prado’s towing ability. It still isn’t a powerhouse, but the available torque low down allows relaxed cruising. Just don’t try to win any traffic light derbies. Having said that the Prado makes a pretty good tow vehicle both on and off road and the trailer sway control greatly assists the driver. 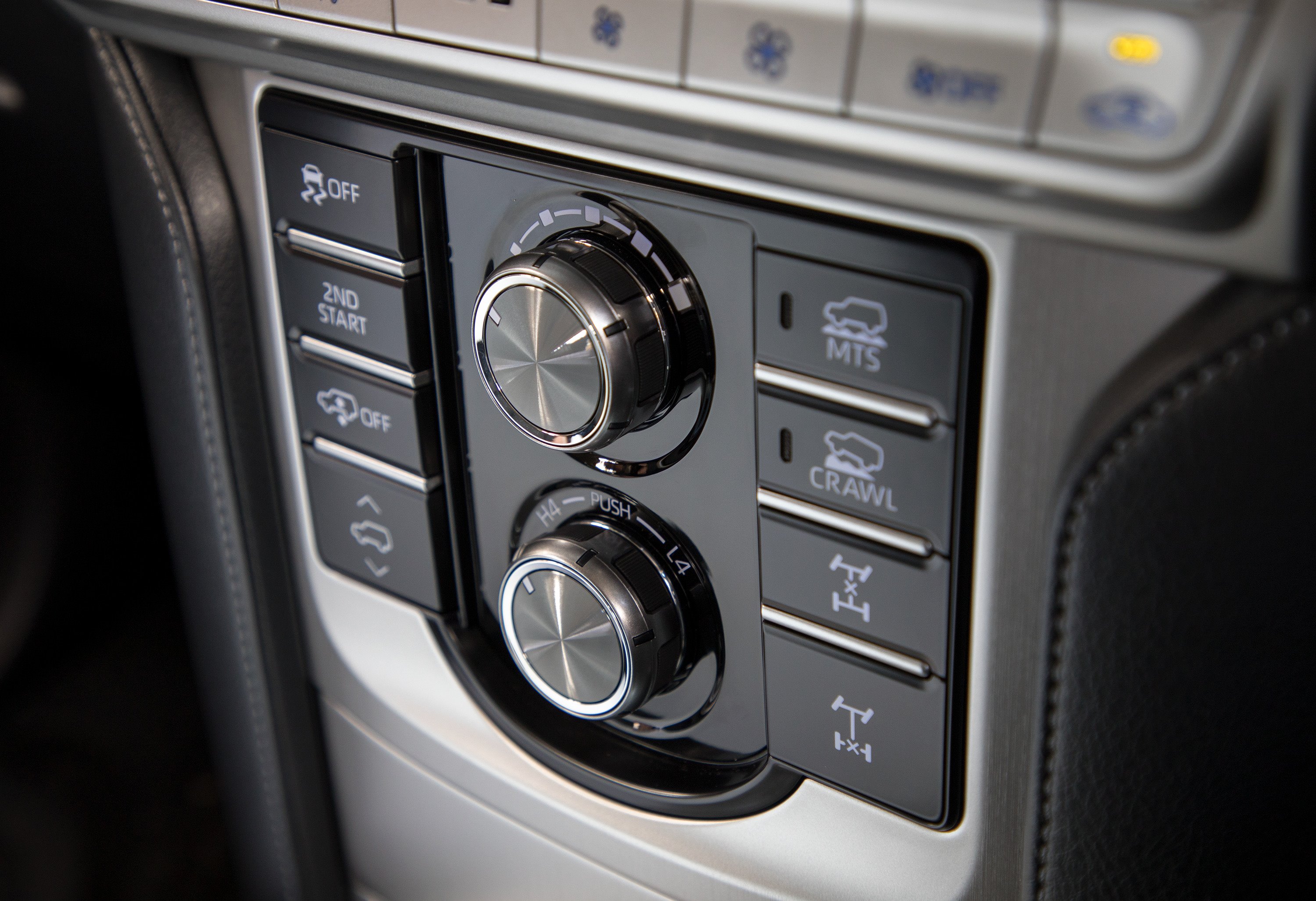 The size of the Prado makes it also well suited to real 4WD conditions, with an overall length of 4995mm, width of 1885mm, height of 1845mm and wheelbase of 2790mm. Approach angle is 30.4 degrees, rampover angle is 21.1 degrees and departure angle is 23.5 degrees. Wading depth is 700mm and ground clearance is 219mm standard.

Kakadu features the Adaptive Variable Suspension, Kinetic Dynamic Suspension System (KDSS), Multi-Terrain Select (MTS). This system quite frankly is up there with the best four wheel drive systems but my fear is that inexperienced drivers will use it to overcome quality driving and get themselves in trouble rather than out of trouble.

Off road the Prado is a more than capable performer. We have driven them on sand, fire trails, in the desert, on the farm, along tight4WD tracks, just about everywhere. They simply don’t let you down and the reliability is awesome. The recent engine upgrades also help with towing, both on and off road. On road the Prado has good ride and handling for a 4WD, better than most. 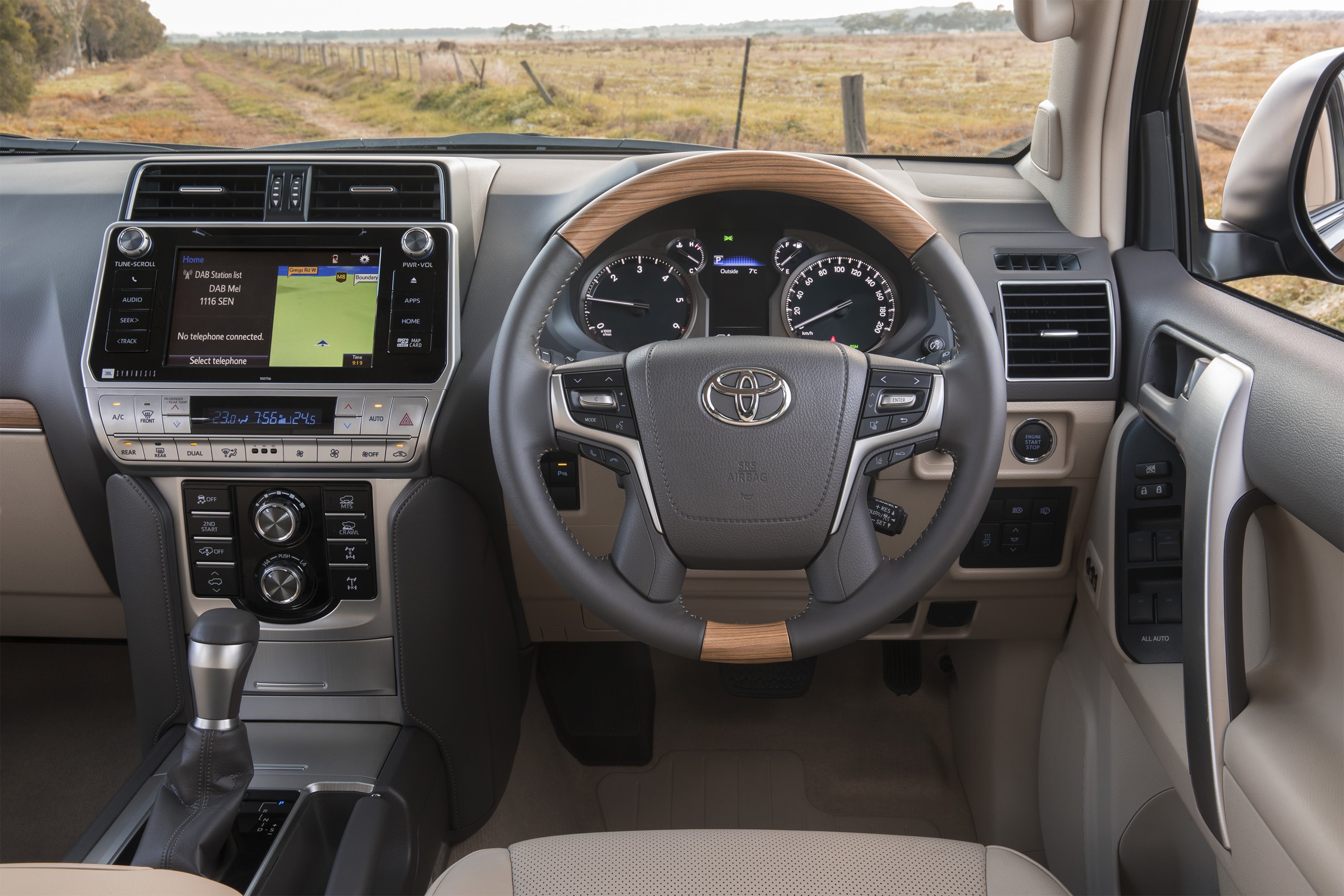 Safety is still a strong feature with the GX Prado with:

So there it is. The Toyota Prado Kakadu 7 seat 4WD wagon. It combines all the bling for the family and the 4WD capability for the enthusiasts. Even though it is some $84,000 it actually is pretty good value. It is relatively affordable, has genuine 4WD capability, can tow 3000kg, is economical, has an abundance of aftermarket accessories for it and has Toyota’s legendary reliability. 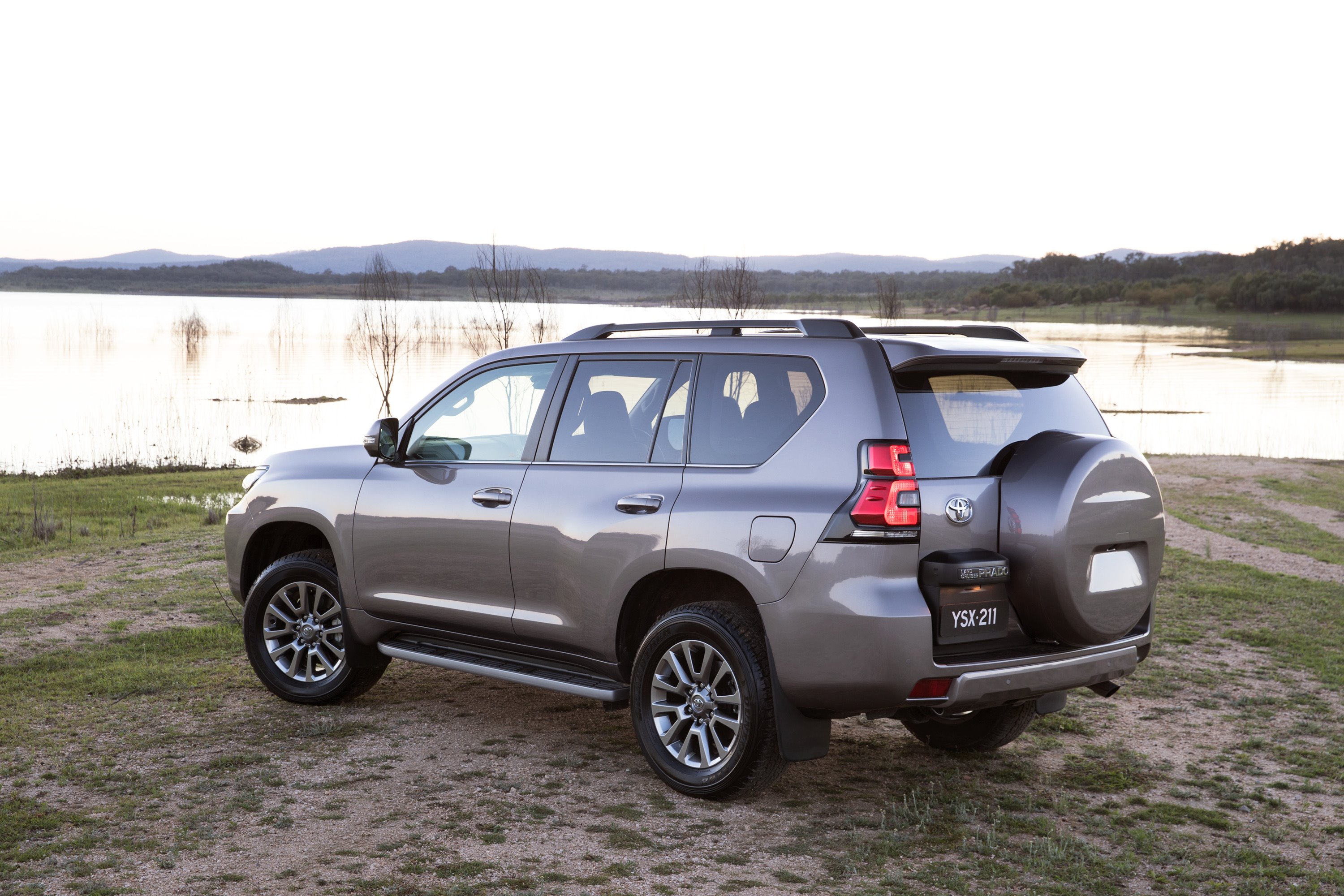 *MLP – Manufacturers List Price includes GST and LCT but excluding statutory charges, dealer costs and dealer delivery. See your dealer for RDAP. Does not include price of any options.

The Toyota Prado Kakadu 4WD 7 seat wagon we are testing here, is the top of the range with a complete range of standard features. It has all the bling, but in some ways has always been an underrated 4WD.  Often dubbed a soccer mum taxi, the Prado has always had excellent off road ability. It’s just that many owners never explored those qualities. Updated in both 2016 and again in 2017, the Prado has managed to keep at the forefront of the segment

The new Kia Sorento is revealed for the first time

The new Kia Sorento is revealed for the first time today. Powerful, progressive and versatile, the fourth generation of Kia’s flagship SUV is designed and engineered to take on everything life throws at it. […]