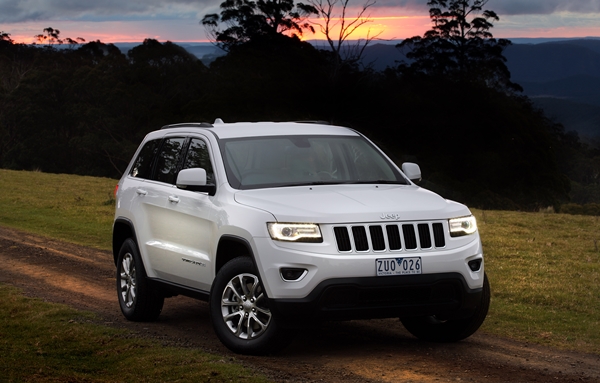 Ever since Jeep released its latest version of the Grand Cherokee in 2011 it has been a revelation. Here we have an American 4WD that has legendary off road capability combined with a powerful and economical diesel motor packaged in a stylish body.

The MY 2014 Laredo has a host of external enhancements including new bi-xenon HID headlamps with signature LED daytime running lights (DRLs), new wheels designs,  larger tail lamps with LED lighting, a larger and more aerodynamic rear spoiler, new bumpers and a re-sculpted tailgate that offers greater visibility and a host of detail styling changes. It does however retain Jeep’s classic seven-slot grille albeit a little shorter.

About Rob Fraser 987 Articles
Rob Fraser – General dogsbody & Director Rob is the founder of the business. He constantly mutters something about way too many red wines one evening being to blame. He first learned to drive on the farm in a left hand drive WW11 Jeep when he was 11, many years ago. He has maintained a strong interest in the industry ever since and was hooked on 4WDriving way back then. Having previously lived at the top of corporate life he retired in 2000 and hasn’t put a suit and tie on since. Cars are his passion so why not have a business doing what you love he figures. He has towed either a caravan or camper trailer to most parts of Australia, has run guided tours for camper trailers’ and instructed drivers in off road towing Often known for taking the 4WD in the driveway over the sports car, he has travelled pretty much everywhere in Australia and when he is bored goes for a drive.

The Colorado retains its pleasant external shape and has some new colours, namely the vibrant Sizzle Orange which is certainly noticeable on the road. […]

The next stage in the Project Pajero story is a 18 day trip in late June. The itinerary includes travelling along the Murray River, up through the Oodnadatta track and the Flinders Ranges, Wilpena Pound, branching off at Marree towards Birdsville along the Birdsville Track. […]

Nissan Patrol has a long and excellent history with in 4WD fraternity with many an argument between enthusiasts about the various virtues and abilities of either the Patrol or LandCruiser. […]